‘Fat and happy’ with a conservative court, are Republicans losing a winning issue? 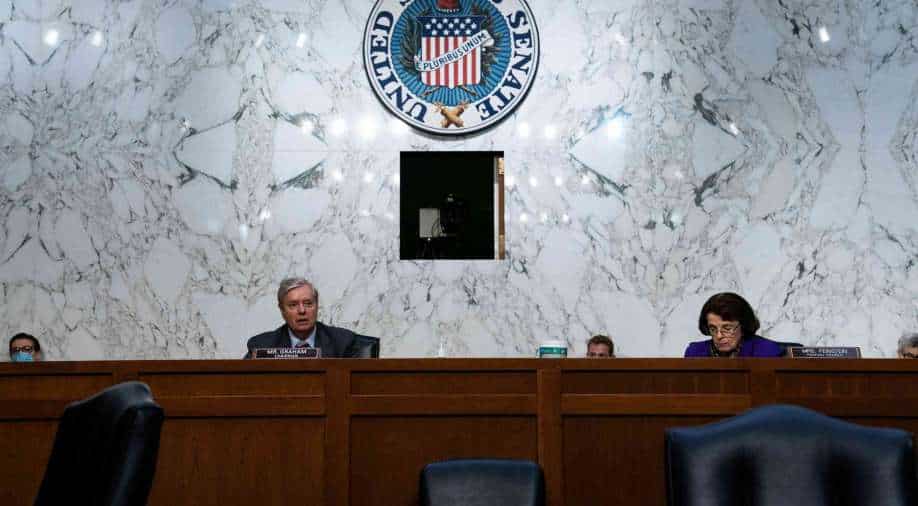 Without the specter of a liberal court to motivate conservative voters anymore, they may find themselves without the issue that played a crucial role in Trump’s unexpected victory four years ago and has fortified his political base throughout a tumultuous first term.

The confirmation on Monday of Justice Amy Coney Barrett all but ensures a durable conservative majority on the Supreme Court for years to come and provides the capstone on the Trump administration’s broader effort to push the entire federal judiciary solidly to the right.

Its work has been so fast and so effective that there is only one vacancy now in the appellate courts: the seat left open by Barrett’s promotion.

But President Donald Trump and Republicans risk becoming victims of their own success. Without the specter of a liberal court to motivate conservative voters anymore, they may find themselves without the issue that played a crucial role in Trump’s unexpected victory four years ago and has fortified his political base throughout a tumultuous first term.

“It’s like the dog catching the car,” said Charlie Cook, editor of the nonpartisan Cook Political Report, which handicaps elections and is forecasting a difficult environment for Republicans up and down the ballot.

On a larger level, there is the risk of getting complacent. Republicans feel satisfied that they appear to have prevailed in their decades-long quest to install more conservatives on the courts. Then there is the issue that the Barrett confirmation was uneventful and anticlimactic — not exactly the kind of spectacle that gets people marching in the streets.

Normally, a Supreme Court confirmation fight is an occasion that seizes the country’s attention and energizes partisans left and right. But the fact the entire country knew Barrett’s confirmation was a virtual lock took away any sense of mystery or intrigue.

“There was no drama,” Cook said. “After about three days it became clear there was pretty much nothing the Democrats could do. So it just didn’t get legs. And there is just so much else going on.”

Privately, Republicans have expressed some disappointment that there was very little of the partisan fury and indignation that erupted during the confirmation of Justice Brett M. Kavanaugh in 2018. The Kavanaugh hearings included a sexual assault allegation against him from his high school years, and became a remarkably emotional and divisive culture war clash that raised questions of class and privilege, gender roles and the presumption of belief extended to victims of sexual assault.

Though Kavanaugh forcefully denied the charges, and his allies accused Democrats of a vicious smear campaign, Republicans also believe the hearings awakened their voters a few weeks before the midterm elections at a point when polls were showing low enthusiasm on their side and many donors were remaining on the sidelines.

That November, Republicans gained a total of two Senate seats. In red states like North Dakota, the Kavanaugh issue helped put already difficult races even more out of reach. Donors who had written the party off started signing checks again.

Strategists said they could not be as certain that conservative voters will view the court with the same urgency as they have before. And they are seeking new ways to motivate their base.

“Right now we’re fat and happy,” said Mike Davis, president of the Article III Project, a group that strategizes with Republican senators and the White House on judicial confirmations. “We have the first true conservative majority on the Supreme Court in 80 years. The president has done such an outstanding job on judicial appointments that we are out of federal circuit seats to fill. So Republicans could be complacent while Democrats are fired up.”

But Davis has not given up on the court as the path to igniting fervor on his side. He is pinning his hopes on court packing.

“Court packing is so much more of a culture fight,” Davis said, describing the Republican messaging on the issue, which encompasses a variety of proposals to reform the structure of the judiciary such as adding new justices to the Supreme Court and expanding the lower courts.

He ran through a list of rights that he thought an expanded court would jeopardize: religious expression, free speech, gun ownership. “Court packing is an extreme, clear and present danger,” he said.

Trump and Republicans in races across the country are amplifying those claims. Speaking at a campaign rally on Monday afternoon in Allentown, Pennsylvania, the president warned that his opponent, former Vice President Joe Biden, would “pack the Supreme Court with radical justices who will shred your Second Amendment and pro-life and so many other things.”

He mentioned Barrett’s nomination only in passing. And he did not bring up the issue of the Supreme Court — the issue many conservative voters see as his greatest achievement — at all during the final presidential debate last week.

Few other Republican candidates are mentioning the Barrett confirmation in their campaigns, instead going after Democrats with exaggerated claims about a plot by “far-left Democrats like Nancy Pelosi” to pack the courts, as an ad by the National Republican Senatorial Committee in Kansas put it. As speaker of the House, Pelosi has no official role in court confirmations, which the Senate handles. And Biden has not said he supports any plan to add judges to the courts, but he has proposed studying the issue through a bipartisan commission if elected.

When Trump started running for president five years ago, the idea that he could be in a position to pick the next justice on the Supreme Court was enough to alarm many conservatives. They worried he didn’t understand how important the issue was, questioned the sincerity of his opposition to abortion and considered it a very real possibility that he would name his sister, a retired federal judge, to the bench.

But in the spring of 2016, as he was wrapping up the nomination, he released a list of noted conservative judges and lawyers he promised to stick to when nominating someone that helped give him credibility on the issue. And conservatives turned out, determined to prevent a Supreme Court shaped by Hillary Clinton that would perhaps forever foreclose overturning Roe v. Wade, which established a legal right to abortion.

The court as an issue helped Trump win 81% of the white evangelical vote. And his commitment to it throughout his first term — along with his willingness to talk about the issues so bluntly and declare his desire to see Roe undone, which Republicans typically did not say even if they believed it privately — has forged a seemingly unbreakable bond with social conservatives.

Robert P. Jones, president of the Public Religion Research Institute, said that those trends appeared likely to hold in this election. Nearly 9 in 10 white evangelicals say they are “absolutely certain” to vote, he said, and the share of white evangelicals who support the president remains high — 79%.

Jessica Anderson, executive director of Heritage Action for America, cited “unprecedented enthusiasm” for Barrett’s nomination among grassroots conservatives and said her place on the bench would bring about “a much-needed change from the activist drift of the court.”

A significant number of people could, however, see the court as an issue that makes them vote for Biden. The death of Justice Ruth Bader Ginsburg, a hero to many liberals, was a galvanizing event unlike almost any other this year for Democrats.

Senate Democrats also played their weak hand during the confirmation more cautiously and strategically than Republicans anticipated. Instead of raising questions about Barrett’s religious convictions as a conservative Catholic and how that shaped her jurisprudence, which Republicans had expected and prepared for, Democrats were mostly focused on framing a Barrett confirmation as the death knell of the Affordable Care Act and the coverage it provides for preexisting medical conditions.

“That didn’t excite the conservative base,” said Frank Cannon, president of the American Principles Project.

But what can, he said, is a vote in the Senate to confirm a sixth conservative to the court — and a reminder that the election a week away could nullify that and all the work conservatives have done with the courts over the last four years.

“With our voters, we’ve been reminding them that if Trump loses and we lose the Senate, the Democrats are intent on packing the court,” he said. “We can lose this in a blink — one week after we won it — and I think that’s a powerful message.”