'Bonfire of the Vanities' author Tom Wolfe dead at 88 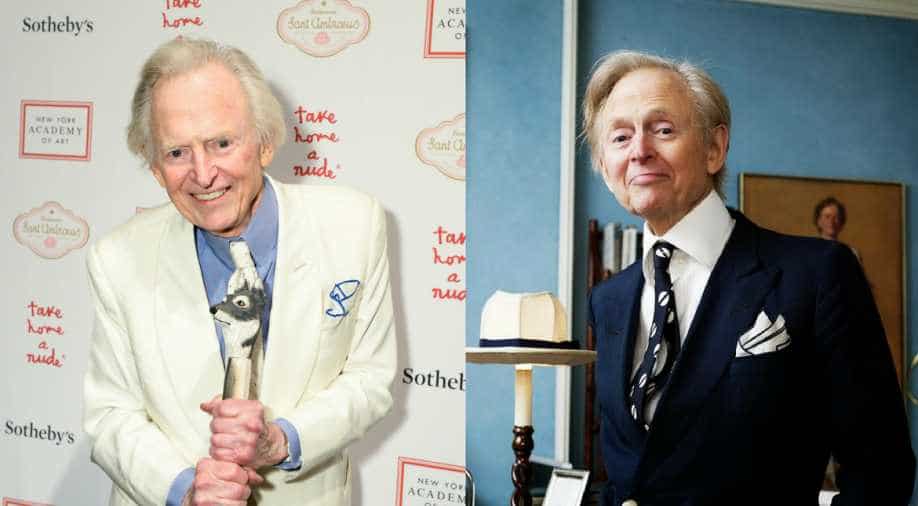 Tom Wolfe, an early practitioner of "new journalism" who captured the mood and culture of America across five decades with books including "The Bonfire of the Vanities," "The Right Stuff," and "The Electric Kool-Aid Acid Test," has died at the age of 88, his agent said.

Wolfe, who had a knack for coining phrases such as "radical chic" and "the me decade," died on Monday of an unspecified infection in a New York City hospital, his agent, Lynn Nesbit, said in a phone interview on Tuesday.

Wolfe`s works - fiction and non-fiction alike - looked at realms ranging from the art world to Wall Street to 1960s hippie culture and touched on the issues of class, power, race, corruption, and sex.

"I think every living moment of a human being`s life unless the person is starving or in immediate danger of death in some other way, is controlled by a concern for status," Wolfe said in an interview.

Wolfe came up with "radical chic" to brand pretentious liberals, the "me decade" to sum up the self-indulgence of the 1970s and the right stuff to quantify intangible characteristics of the first U.S. astronauts and their test pilot predecessors.

He was never deterred by the fact that he often did not fit in with his research subjects, partly because he was such a sartorial dandy, known for his white suits.

Wolfe was in his mid-70s while hanging out with college kids and working on the novel "I Am Charlotte Simmons," and was a fairly conservative drug-free observer in a coat and tie while travelling with Ken Kesey and his LSD-dropping hippie tribe known as The Merry Pranksters for "The Electric Kool-Aid Acid Test" in the `60s. By looking so out of place, he figured people would be more prone to explain things to him.

`NEW JOURNALISM`
Wolfe started his writing career at the Springfield, Massachusetts, Union newspaper and also worked for the Washington Post, New York Herald-Tribune and New York magazine. He was present at the birth of what was known as "new journalism," a loose style that featured lots of dialogue and detail and allowed reporters to narrate and develop characters in a way more often associated with fiction.

One of the genre's defining moments came when Wolfe was having trouble meeting a deadline for a 1964 magazine story on the hot-rod car culture.

In frustration, he sent his editor a letter with his thoughts and reportage. The magazine ran it verbatim as "There Goes (Varoom! Varoom!) That Kandy-Kolored Tangerine-Flake Streamline Baby. "That led to a compilation of Wolfe`s magazine pieces, followed by "The Electric Kool-Aid Acid Test," which captured the spirit of the psychedelic era during his time with Kesey, author of "One Flew Over the Cuckoo`s Nest," and his band of pranksters who helped spread the popularity of LSD in California. Written in a wild free-association style that disregarded rules of punctuation, it was filled with sentence fragments and used words like "skakkkkkkkkkkkkkk" and "wowwwwwww."

Wolfe`s style was not for everyone.

"The question is not only whether Tom Wolfe can be taken seriously but whether he can be taken at all," a leading magazine critic wrote in 1968. "He is irritating, but he did develop a new journalistic idiom that has brought relief from standard Middle-High Journalese."

Wolfe became fascinated with astronauts after Rolling Stone magazine assigned him to cover an Apollo program launch in 1972. Nine years later and in a more restrained style than some of his earlier works, he wrote "The Right Stuff" about the first seven U.S. astronauts and test pilot Chuck Yeager who came before them.

His first try at fiction was "The Bonfire of the Vanities" in 1987, which captured the cultural feel of free-wheeling Wall Street "masters of the universe" as well as his non-fiction books did. "Bonfire," a best-seller that was a much-revised version of a serial he wrote for Rolling Stone, portrayed class struggles in New York City against a backdrop of Wall Street ambition, racial stress, and yellow journalism.

Wolfe followed with more novels - "A Man in Full" about race, big money and high society in Atlanta "I Am Charlotte Simmons," a tale of college high life, and "Back to Blood" about immigrants in Florida in 2012.

Wolfe complained that novelists did not bring enough reality to their books, and while bemoaning the state of American literature, offered himself as an exemplar of what it should be. That kindled rivalries with contemporaries Norman Mailer and John Updike, who Wolfe referred to as "two old piles of bones." John Irving angrily denounced Wolfe by saying, "I can`t read him because he`s such a bad writer."

Wolfe`s trademark was the white suit, often accessorised with a white hat and two-tone shoes. He admitted he liked the attention they brought him.

Wolfe was born March 2, 1930, and grew up in Richmond, Virginia, the son of an agronomist father and an arts-oriented mother. He was a star pitcher in high school and in college at Washington and Lee and unsuccessfully tried out for the New York Giants. Wolfe lived in New York with his wife, Sheila. He had two children.