Did Russia give orders to 'attack' Ukraine? US media cites intel inputs that were apparently known to Biden 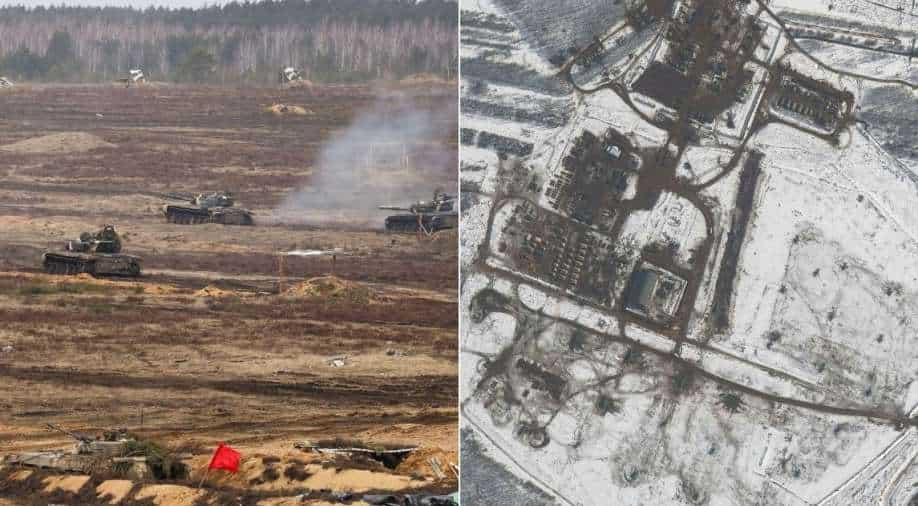 Troops take part in the joint military drills of the armed forces of Russia and Belarus (left). A satellite image shows an overview of a helicopter deployment, a battle group, and troops, in Valuyki, Russia February 20, 2022 (right). Photograph:( Reuters )

The United States and Western allies have estimated that Russia has placed more than 150,000 troops near Ukraine's borders in recent weeks

The Russia and Ukraine border tensions continue to escalate despite efforts to defuse it with diplomatic talks. In the latest development, the United States media reports cited intelligence inputs and stated that the Russian military has been ordered to 'attack' Ukraine.

The reports have also added that the military is moving forward with an intention to attack Ukraine. These reports added to the fears of Western countries that Russia will attack at "any time".

As per the reports, it was that intelligence that gave US President Joe Biden the confidence to say on Friday (February 18) he was "convinced" that Russian President Vladimir Putin had decided to invade.

However, there's no official statement on the reports by several media outlets such as Washington Post, CBS, the New York Times, CNN.

The Washington Post noted: "US intelligence that provided Biden with the confidence to make the assertion came from an order given to Russian subordinates to proceed with a full-scale attack, according to several people familiar with the matter, who spoke on the condition of anonymity because of the matter's sensitivity."

CNN said other signs that might indicate an imminent Russian invasion of Ukraine "have not yet been observed" citing an anonymous source. The source also warned that orders to attack could still be withdrawn, or that the intelligence might have been planted to mislead the West.

Russia has placed more than 150,000 troops near Ukraine's borders in recent weeks, the United States and Western allies have estimated.

US official told reporters Friday, insisting on anonymity that "forty to fifty per cent (of those troops) are in an attack position. They have uncoiled in tactical assembly in the last 48 hours".

Reports have also quoted a US official, who on Sunday said that Biden's assertion that Putin has made the decision to roll Russian forces into Ukraine was based on intelligence that Russian front-line commanders have been given orders to begin final preparations for an attack.