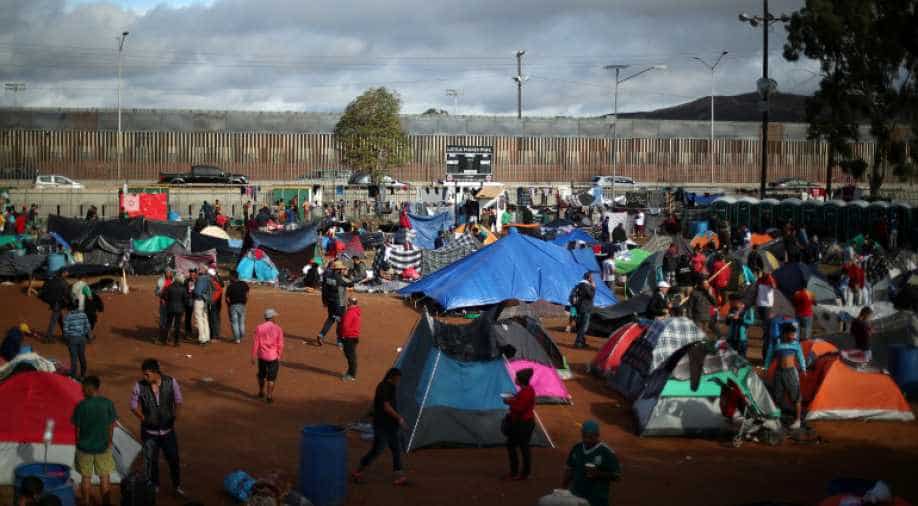 Some 4,600 migrants from the bedraggled caravans whose advance has angered US President Donald Trump are camped out with blankets and little food in an overcrowded stadium in Tijuana, whose mayor has declared a "humanitarian crisis".

Unaccompanied minors and other vulnerable migrants risk falling victim to crime in the Mexican border city of Tijuana, where thousands of Central Americans from caravans may be stuck for months as authorities tighten up asylum rules, advocates say.

Some 4,600 migrants from the bedraggled caravans whose advance has angered US President Donald Trump are camped out with blankets and little food in an overcrowded stadium in Tijuana, whose mayor has declared a "humanitarian crisis."

Trump has sent troops to the US-Mexico border, authorized the use of lethal force and threatened to shut down the frontier entirely if the migrant caravans are not stopped.

Among the Central Americans, many of whom are Hondurans fleeing violence and poverty in the struggling region, are about 80 minors between the ages of 10 and 17, according to migrants rights groups.

Josue, a 15-year-old Honduran in Tijuana, said that during a previous attempt to cross into the United States last year he was kidnapped and badly beaten in Mexico by drug traffickers claiming to be from the notorious Zetas gang.

"I ended up in the hospital, I don`t know how, because I arrived there half-dead," he said, declining to give his second name.

Once he was well enough, authorities deported him, he said.

Reuters was not able to independently corroborate details of his story. Mexico`s immigration institute did not immediately respond to a request for comment about the case.

Tijuana was rated by Mexican think tank Seguridad Justicia y Paz as the fifth most violent city in the world in 2017, with a higher murder rate than the Central American cities from which the migrants are escaping.

Juan Manuel Gastelum, Tijuana`s mayor, said late on Thursday that the city was facing a humanitarian crisis and that supporting the migrants was costing more than 500,000 pesos ($25,000) a day. He urged international agencies to help Tijuana.

Activists fear the Central Americans could be stranded for a long time in the city, where some protests against the presence of the caravan have broken out.

In May, citing a lack of processing space at the same crossing, US immigration officials stalled a previous caravan that also drew Trump`s anger. Eventually, they began letting in a trickle of people from the group.

To manage flows of asylum claimants, Mexican and US authorities have in recent years maintained a waiting list. Lawyers and human rights group Amnesty International have said such measures slow the process.

US Customs and Border Protection said in a statement sent to Reuters that the San Ysidro Port of Entry, which connects Tijuana to San Diego in California, could process up to 100 people per day and that it was working with Mexico to manage the flow.

Mexico`s National Immigration Institute said it protects the rights of all foreigners and was "respectful of immigration policy implemented by other countries."

Stalled for days, migrants from the caravan have been signing onto the waiting list. They include gay and transgender teenagers.

Erika Pinheiro, director of litigation at Al Otro Lado, an immigration legal advocacy group, last week told a Californian court under oath that "LGBT children cannot safely stay in Mexico. They are at risk of violence and persecution."

Tijuana has just one shelter for migrant children, which subsists with the help of civic organizations.

"Young people are definitely the most vulnerable in this type of movement," said Mynor Contreras, who runs the local YMCA. "We`ve never received so many in such a short time."

If the children cannot enter the United States, they risk being deported from Mexico. That can spell big trouble.

"I don`t want to die," said 16-year-old Justin, who related how his life was threatened last month for not paying a "war tax" that gangsters charged for his small used-clothing business in the Honduran city of San Pedro Sula. "That day I told my mother to give me her blessing and I left," he said, crying.