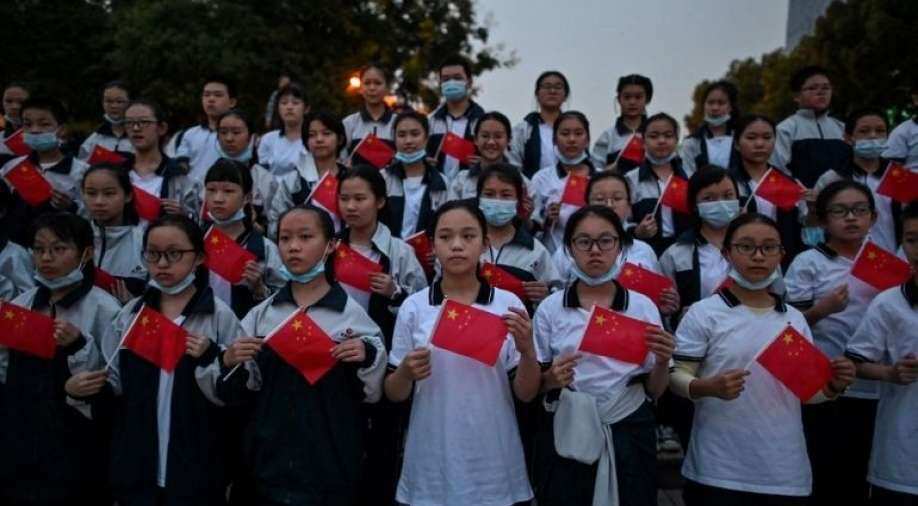 Students wearing face masks as a preventive measure against the Covid-19 coronavirus hold national flags as they rehearse a song in a park next to the Yangtze River in Wuhan, in China’s central Hubei province on September 25, 2020. Photograph:( AFP )

China has banned severe punishments for school children, specifically those which could cause physical or mental trauma

China has banned severe punishments for school children, specifically those which could cause physical or mental trauma. Over the last few years, the country has witnessed an increase in the number of student deaths that are linked to harsh discipline in institutions.

The new rules were issued by the Ministry of Education and took effect starting Monday. Now, punishments that humiliate students are forbidden, alongside the reinforcement of the existing ban on corporal punishment.

Among practices that are now banned are caning, verbal abuse, and forcing students to stand or kneel on the floor for hours. As part of this move, students are now encouraged to write apologies or to take up classroom chores in the form of punishment for minor offences like forgetting to complete one's homework.

Students who commit more severe offences like bullying may face suspension or may be advised to take counselling. Corporal punishment has remained outlawed in China since 1986, but its enforcement has been ridden with gaps, and many parents also don't perceive it as a problem big enough.

There is no clarity on how teachers who flout these norms will be punished. Cases of children dying after being beaten by teachers, or by taking their own lives after being humiliated at schools are common in China.

In September last year, a 10-year-old girl in Sichuan died after her maths teacher pulled on her ears, and beat her head for doing two sums incorrectly, as reported by news agency Xinhua.

Another case emerged from Jiangsu, where a fifth-grader killed herself in June 2020 after her teacher allegedly slapped her and humiliated her in front of the class.