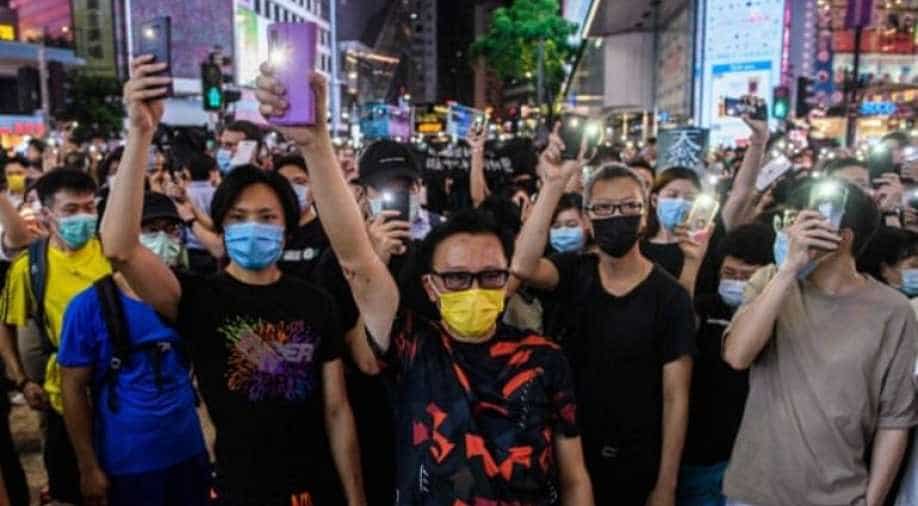 Pro-democracy demonstrators sing the anthem ‘Glory to Hong Kong’ on Friday to mark a year since major clashes with police in the city. Photograph:( AFP )

As part of this law, naysayers of the Chinese government will be put in prison for three-ten years depending on the gravity of crimes

China today enforced its controversial national security law in Hong Kong, a law that will essentially hammer the principle of “one country, two systems” guaranteed to the city of Hong Kong as part of its handover process to China.

As part of this law, naysayers of the Chinese government will be put in prison for three-ten years depending on the gravity of crimes. Those who commit “serious crimes” may also face life imprisonment. However, this is all speculative as Beijing has not made the draft of this law public.

The law was passed unanimously by China’s rubber-stamp parliament.

July 1 marks the 23rd anniversary of Hong Kong’s handover to China. Large demonstrations were planned for the city. This is for the first time that the July 1 parade has been cancelled. Police cites “coronavirus” concerns for the ban.

With activists fearing jail time, or being extradited to China, a lot of activists have fled the city.  Pro-democracy leader Joshua Wong quit his party this morning. His pro-democracy group Demosisto also ceased its operations today.

Global leaders have already come out with some very strong statements against. European Commission President, Ursula von der Leyen, said, “We have indeed consistently said that China would risk very negative consequences if it went ahead with this law, including for business confidence, China's reputation, public perception in hong kong and internationally”.

“We are obviously deeply concerned about the decision to pass the national security law in Beijing as it affects hong kong. We will be looking at the law very carefully”, British Prime Minister, Boris Johnson.

The United Nations has already called the situation in Hong Kong “urgent”. The US Senate has passed a law that imposes sanctions on people or companies backing efforts to restrict Hong Kong's autonomy.

China will risks losing out on a business hub, with analysts fearing companies pulling out.