After 6 days of rest, migrant caravan heads again towards US 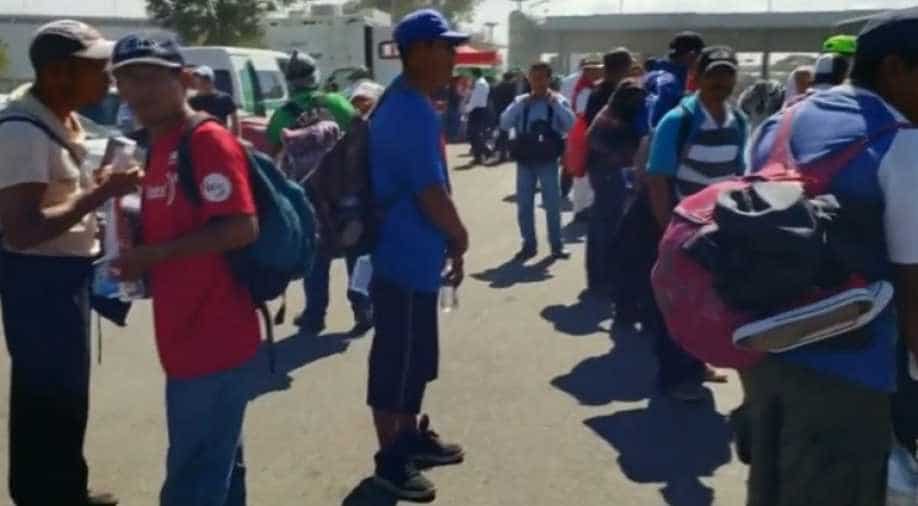 The caravan left San Pedro Sula, Honduras, on October 13 and has covered more than 1,500 kilometers (930 miles) so far.

Around 5,000 Central Americans left Mexico City at dawn Saturday, brushing exhaustion and illness aside to get back on the road towards the United States as part of a migrant caravan that has drawn fury from President Donald Trump.

Between coughs and sneezes, the migrants packed up their makeshift camp in a sports park, where they had rested for six nights, and headed to the city's metro -- which opened an hour early to transport them toward neighbouring Mexico State.

"We got cold sleeping out in the open, so that's why we're sick now. The kids have got lice, there's not always enough water to bathe them," Adamari Correa, a Guatemalan travelling with her sister and her sister's children, told AFP.

From there, the plan was to set off once again on foot toward Queretaro in central Mexico, still hundreds of kilometres (miles) from the US border.

"I don't want to walk, Mommy!" cried one little girl wrapped in a blanket, as her mother -- a sleeping mat on her back and two large bundles in each hand --  stood in an endless line waiting to board the five designated train, each carrying around 1,000 people, metro authorities estimated.

Some 1,000 police officers kept watch over the operation.

The caravan left San Pedro Sula, Honduras, on October 13 and has covered more than 1,500 kilometers (930 miles) so far.

At least two other caravans have since been established, defying threats from Trump -- who has decried what he describes as an "invasion" and ordered thousands of soldiers to the US-Mexico border.

On Friday, his administration unveiled a controversial new crackdown, announcing it would no longer allow people who enter the US illegally to claim asylum. Instead, those seeking political or other kinds of asylum will be heard exclusively at the border crossings.

Also on Friday, a group of 1,300 Central American migrants fragmented from the caravan to embark on the same path from Mexico City.

They quickly amassed on the sides of the wide high-speed road that snakes around the capital, leading to the exit toward Queretaro.

"But we're determined to reach the border and beyond."

On the highway, truck drivers stopped to offer rides. Some migrants clung to vehicles; others found a seat perched on the hood, above the engine.

"Thank you Mexico! We go forward!" they yelled to passers-by, waving.

Other caravan members following behind trekked on foot or took public buses to reach the Queretaro exit, where trucks slowed to pick them up.

Under the already intense sun, transport police were also seen helping migrants into one cargo vehicle's two trailers -- but they lacked any ventilation system.

"When you want something, you have to take risks and not care what happens," said Lucas Rocha, a 31-year-old on his second journey to the border. He said if he doesn't make it this time, he'll try again.

Years ago, he rode the notoriously dangerous cargo train route through Mexico known as "La Bestia" -- "the beast."

Along with that route, migrants are routinely robbed and assaulted by organized criminals -- while scrambling onto moving trains sees many get dragged underneath and lose limbs.