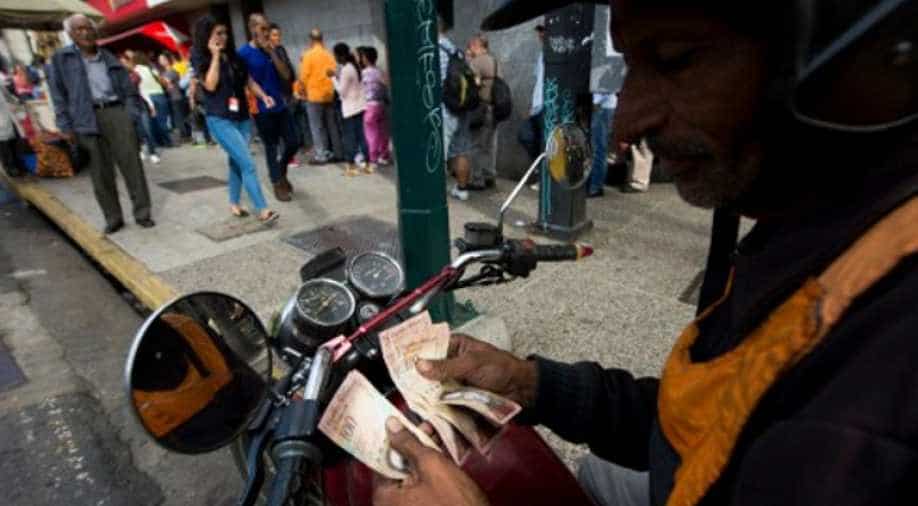 Venezuela is launching a 500-bolivar bill, the first in a new series of banknotes that will eventually be issued in denominations of up to 20,000 bolivars. Photograph:( AFP )

Venezuelans lined up on Thursday to deposit 100-unit banknotes before they turned worthless, but replacement bills had yet to arrive, increasing the cash chaos in the country with the world's highest inflation.

Some frustrated customers received expiring 100-bolivar notes when they withdrew money at ATMs, then immediately had to line up again to re-deposit them.

Venezuelans are stuck in currency limbo after President Nicolas Maduro ordered the 100-bolivar note, the largest denomination, currently worth about three US cents,  removed from circulation in 72 hours.

The Thursday deadline was supposed to coincide with the launch of a 500-bolivar bill, the first in a new series of banknotes that will eventually be issued in denominations of up to 20,000 bolivars.

But with the new bills yet to arrive in the capital Caracas by mid-day, Venezuelans were left facing economic chaos.

"I don't get the joke," office worker Yarelis Carrero said. "When you withdraw cash at the ATMs, they give you 100-bolivar bills. And you can't get the new ones inside the bank, either."

She woke up early to get rid of her expiring banknotes only to discover that the bills meant to replace them were nowhere to be found.

From Friday, Venezuelans will be able to exchange 100-bolivar bills only at one of the central bank's two headquarters buildings.

Maduro, who has presided over an unravelling of Venezuela's oil-rich economy, said the 100-bolivar note had to be killed because "mafias" were hoarding it abroad in what he called a US-backed plot to destabilise Venezuela.

In response, he sealed the borders with Colombia and Brazil, where he says much of the hoarding is happening. Now those frontiers will stay shut until Sunday.

That led to pandemonium on the border, as foreigners rushed home and Venezuelans found themselves cut off from precious supplies of food, medicine and basic goods that are in desperately short supply in Venezuela.

Central bank chief Nelson Merentes promised last week that "millions and millions" of new bank notes were on their way.

The new bills, which are being printed abroad, were originally meant to circulate alongside the old ones during a transition period.

But Maduro axed that plan when he issued his decree against the 100-bolivar note Sunday.

It accounted for 77 per cent of the cash in circulation in Venezuela, according to official figures.

Venezuelans had grown used to carrying around huge stacks of them for even the smallest purchases.

Now they are stuck with even bigger piles of 10-, 20- and 50-bolivar notes just as the Christmas shopping season is at its height.

Some companies have stopped dealing in cash altogether.

One of the main Caracas taxi companies now requires clients to pay for their rides in advance by electronic bank transfer.

Standing in line at the bank, customers complained there was no sign of the new banknotes arriving.

"Nobody's seen them yet," Saul Bernal said. "A guy I know who works for an armoured truck company said even they haven't seen them. Pure lies!"

Pummeled by low oil prices, Venezuela is mired in economic crisis and crippled with the world's highest inflation rate -- set to hit 475 per cent this year, according to an IMF forecast.

Maduro's popularity has plunged amid the turmoil, but the fractured opposition has so far failed to force the leftist leader to relinquish his grip on power.