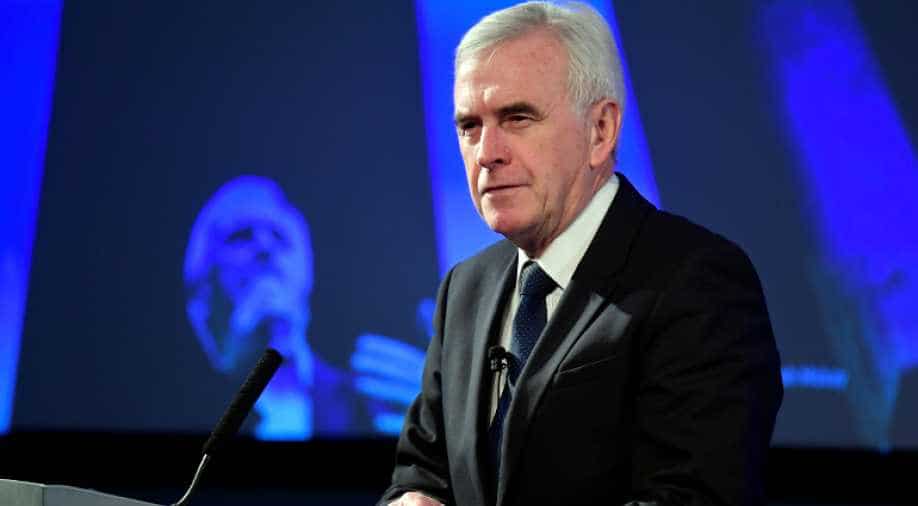 McDonnell, 67, who describes Karl Marx as one of his main influences, has been at the vanguard of a left-wing revival in Britain`s main opposition party under fellow socialist Jeremy Corbyn. He has promised sweeping nationalisation, higher public spending and an overhaul of the banking system.

The British Labour Party`s would-be finance minister, John McDonnell, has a message for the world: he is deadly serious about overthrowing capitalism and building a socialist society.

McDonnell, 67, who describes Karl Marx as one of his main influences, has been at the vanguard of a left-wing revival in Britain`s main opposition party under fellow socialist Jeremy Corbyn. He has promised sweeping nationalisation, higher public spending and an overhaul of the banking system.

Asked about his entry in the Who`s Who directory of influential people which lists his passion for "generally fermenting the overthrow of capitalism", McDonnell said it was a joke about beer-making, but he agrees with the principle.

"I believe it. I am serious in my intent. I want to transform this economy," McDonnell told Reuters in an interview. "That means evolving into a system which can achieve that equality, that democracy, that fairness, and tackles the major challenges that we are facing."

With Prime Minister Theresa May`s grip on power looking ever more vulnerable as she faces the most perilous crisis of her premiership struggling to win backing for her Brexit deal, Labour are increasingly confident that they will be the next guardians of the world`s fifth-largest economy.

McDonnell`s gambit is that the social discontent in Britain which fuelled the shock 2016 Brexit vote runs much deeper and that voters who feel left behind by decades of unchecked capitalism and wounded by years of public spending cuts will rally to his call.

"(It was) like everyone`s grievance went into one vote," McDonnell said.

The polls show that is only part of the picture: voters are tired of economic austerity and unhappy with May`s Brexit negotiations, but Labour are only marginally ahead of the ruling Conservative Party. Some commentators have suggested they should be polling better against a government in disarray.

Nevertheless, the combination of an unsated appetite for change and a Brexit-inspired political crisis which has trashed the centrist orthodoxy of British politics, has left Labour confident they will soon win power.

McDonnell said his ambition is create the most radical government in modern British history even as the country is grappling with its exit from the European Union, the most complex negotiations in Europe since the end of World War Two.

Labour`s economic agenda has put the party on a collision course with business. But that has not fazed the party`s leadership, which says that Britain`s economic model is broken and requires radical reform.

The pillars of McDonnell`s economic approach are public ownership and giving power back to the people, or what he describes as being "in and against the state".

McDonnell has outlined a programme of nationalising the railways, energy and water companies and the postal service, raising taxes on businesses and the wealthy.

This would be combined with increased spending on education, skills training, and health care, and harnessing the financial sector to help fund a huge infrastructure investment.

At his party`s annual conference two months ago, McDonnell did little to conceal the scale of his ambition. Businesses were stunned by his plan to force all large companies to hand over a tenth of their equity to their workforce.

Under the proposal every company with more than 250 staff would hand over 1 per cent a year of equity over 10 years.

Executives were particularly taken back because McDonnell has repeatedly told them over the last year that he had "nothing up my sleeve" in terms of unwelcome new policies.

McDonnell`s world view is shaped by his upbringing, he was born in the blue-collar city of Liverpool. His father was a docker, his mother was a cleaner at a department store, who also spent time on the biscuit counter.

As a young man, McDonnell briefly considered becoming a priest before attending night school to gain qualifications that allowed him to go on to study politics at university.

The challenge for McDonnell, as the next potential finance minister, is to walk the line between being radical for the party`s supporters and reassuring for business.

Allies who have watched his progression from the obscure fringes of Tony Blair`s centrist Labour Party to the heart of decision-making say he has evolved as a better salesman, capable of promoting his policies without scaring mainstream voters.

"He`s now in a position of leadership where he`s realised he has to compromise and he has to make the policies saleable," said Austin Mitchell a former Labour member of parliament and fellow socialist campaigner.

McDonnell has worked hard to improve his relationship with big companies. Yet despite a shared interest in close ties with the EU and higher infrastructure spending, business remains wary over taxation and demands for greater state intervention.

Business executives who recently met McDonnell said he came across as affable and pragmatic, and the party`s manifesto last year was more modest than many expected.

Others think his courting of business is a ruse. Only a few years ago he endorsed "insurrection" as a way of changing the government and praised a worker for spitting in her boss`s tea.

"We are not sure whether we can trust him," said one senior finance executive, who recently met him. "He can be charming. But we have a nagging doubt that he is going shaft us."

But Labour`s plans are striking a chord with many Britons who have endured stagnant wage growth and are increasingly uneasy about the deregulation and privatisations over the last three decades.

About half of voters back the renationalisation of the railways, electricity and gas companies. While a poll by the Institute for Public Policy Research found half of Britons think the economy has become less fair over the past decade.

McDonnell believes that economic climate will allow him to push through an agenda that he wants to be more radical than the Prime Minister Clement Attlee`s post-war government, which created the National Health Service and the modern welfare state, and Margaret Thatcher`s taming the power of the unions.

He cites the rising levels of homelessness and a report by the United Nations last week that found the government is in a state of denial about the impact of its policies on the poor.

Even the wealthy "don`t want to step outside their office and as they go to their car step over a homeless person", McDonnell said. "So we are looking for change and I think we are reflecting the mood."