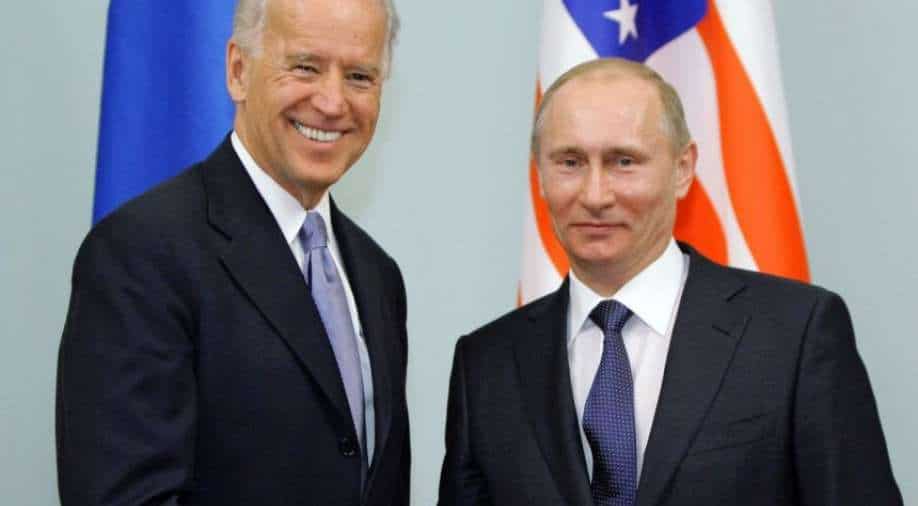 Biden has looked to establish a sharp break from the warm rhetoric often displayed toward Putin by his predecessor, Donald Trump

President Joe Biden had his first call with Vladimir Putin on Tuesday, raising concerns about the arrest of opposition figure Alexei Navalny while pressing the Russian president on his nation's involvement in a massive cyberespionage campaign and bounties on American troops in Afghanistan.

The call was initiated by the White House to discuss progress on extending the New START deal, which limits the two powers to a maximum of 1,550 deployed nuclear warheads each and expires February 5. An agreement now appears to be close.

Biden has looked to establish a sharp break from the warm rhetoric often displayed toward Putin by his predecessor, Donald Trump. But the new president also looked to preserve room for diplomacy, telling the Russian leader that the two nations should finalise a five-year extension of an arms control treaty before it expires early next month, according to two senior administration officials.

The opposition leader and anti-corruption crusader nearly died last year from a poisoning he says he has proved was carried out by the security services, something Putin denies. Navalny is currently imprisoned in Moscow and over the weekend, police made mass arrests of people demonstrating in his support across the country.

Showing Moscow and Washington are still able to cooperate separately on nuclear issues, the White House said Biden and Putin had agreed to "work urgently" to wrap up negotiations on a fresh five-year period for the New START treaty ahead of its expiry.

The Kremlin said that in their call Putin and Biden "expressed satisfaction" over talks and the Russian leader later submitted a bill to parliament on the five-year extension.

The moves raised hopes for more stability between the world's two most heavily armed nations, drawing a line under the uncertainty that entered under Donald Trump, whom Biden replaced just last week.

The Trump administration had offered a one-year extension ahead of the February deadline but discussions broke down over US insistence on tougher verification that Russia had frozen its nuclear arsenal.

Moscow reached out last week to request the call, according to the officials. Biden agreed but wanted first to prepare with his staff and speak with European allies, including the leaders of the Britain, France and Germany.

And on Tuesday before his call with Putin, Biden spoke to NATO Secretary-General Jens Stoltenberg, pledging the United States' commitment to the decades-old alliance founded as a bulwark against Russian aggression.

Biden told Putin that his administration was assessing the SolarWinds breach and the press allegations that Russia offered the Taliban bounties to kill American troops in Afghanistan. Biden said the United States is willing to defend itself and will take action, which could include further sanctions, to ensure that Moscow does not act with impunity, according to the administration officials.

The call came as Putin considers the aftermath of pro-Navalny protests that took place in more than 100 Russian cities over the weekend. Biden's team has already reacted strongly to the crackdown on the protests, in which more than 3,700 people were arrested across Russia, including more than 1,400 in Moscow. More protests are planned for the coming weekend.

Navalny, an anti-corruption campaigner and Putin's fiercest critic, was arrested January 17 as he returned to Russia from Germany, where he had spent nearly five months recovering from nerve-agent poisoning that he blames on the Kremlin. Biden has previously condemned the use of chemical weapons.

However, Biden also diverged strongly with Trump on his approach to Russia's human rights record and Ukraine.

Trump went to great lengths while in power to avoid raising complaints about human rights abuses in Russia or criticizing Moscow's support for separatists in Ukraine and occupation of Crimea. Biden confronted Putin on both issues.

He brought up "our strong support for Ukraine's sovereignty in the face of Russia's ongoing aggression," Psaki said.

She also enumerated a long sequence of other "matters of concern" causing friction in Washington.

These included the unprecedented mass hacking of US computers that has been widely blamed on Russia, interference in the 2020 presidential election and reports that Moscow offered bounties for the killing of US soldiers in Afghanistan.

Psaki said Biden's "intention was also to make clear that the United States will act firmly in defense of our national interests in response to malign actions by Russia."

The Kremlin made no mention of these complaints in its readout of the call, saying instead that Putin urged "normalization of relations."

This would "meet the interests of both countries," the Kremlin said in a statement, describing the two countries as having "special responsibility for maintaining security and stability in the world."

'We're watching you': US Navy warns China amid the rising tension