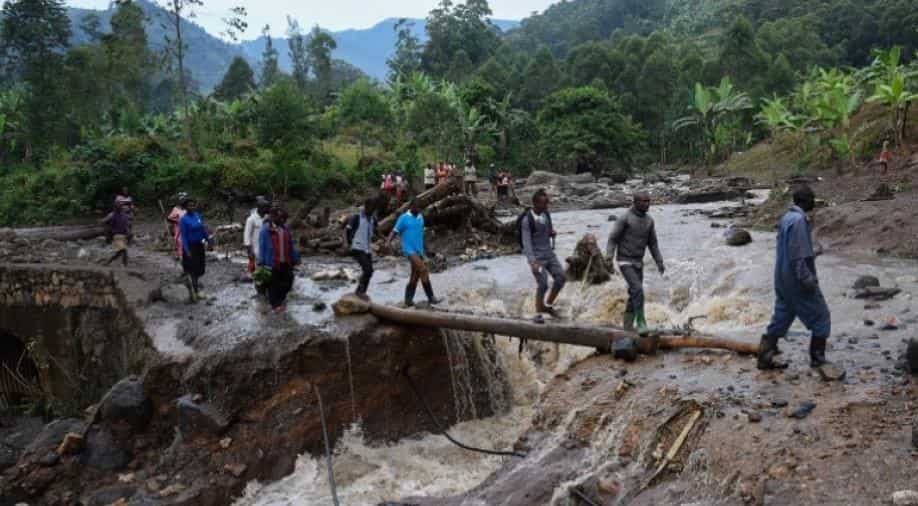 People cross the Sume river a day after it burst its banks in the eastern village of Nanyinza, in Uganda's Bududa district. Photograph:( AFP )

Rescue teams continued picking through the rubble late Friday, searching for survivors and victims of the disaster which took place the previous day in the eastern Bududa district.

At least 41 people were killed after a river in eastern Uganda burst its banks, sending a torrent of mud and rocks barrelling into homes, disaster officials and survivors said Friday.

Rescue teams continued picking through the rubble late Friday, searching for survivors and victims of the disaster which took place the previous day in the eastern Bududa district.

"41 lives have been lost but they're still going ahead digging, trying to look for whether there are other bodies in the riverbed somewhere," said Hilary Onek, Uganda's minister for relief, disaster preparedness and refugees.

"There are casualties up in the hills," he added, referring to higher ground where the river burst its banks before washing away homes lower down.

Onek said 38 bodies had so far been found, as well as dismembered limbs believed to belong to three more individuals.

Survivors spoke of panic and horror as water cascaded down the hillside.

At the hillside Nanyinza village, the Sume river rushed past the ruins of a concrete bridge swept away by the heavy rainfall.

"The moment we saw the water coming we ran and climbed a hill," said John Makimpi a 28-year-old fish trader from Nanyinza who got involved in the ad hoc rescue effort.

"We dragged seven bodies from the river," he said, adding that four of the bodies had been smashed beyond recognition by falling rocks.

Irene Namutosi, 30 and with her legs caked in mud, watched as a solitary mechanical digger struggled to clear huge tree trunks and boulders from the road.

"We found three dead people at one bridge and another three further down the river," she said. "Some didn't have arms or legs because the water and stones hit them so hard."

Government meteorologist Godfrey Mujuni said it was the River Sume, a tributary of the River Manafwa, that had burst its banks.

"It's a mountainous region and because of the high altitude and steep slopes even a small amount of rain can trigger landslides. There is no early warning system in that particular area hit yesterday."

"The rains are still coming and the government and NGOs need to keep their preparedness levels high," he warned.

Nathan Tumuhamye, director of an organisation that helps communities recover from natural disasters and conflict, told AFP that "four to five villages" had been affected.

Bududa district in the foothills of Mount Elgon, which lies on the border between Uganda and Kenya, is a high risk area for landslides.

At least 100 people were reported killed in a landslide in Bududa in March 2010, and in 2012 landslides destroyed three villages.

Downriver from Nanyinza, a small crowd gathered round the bodies of a girl and her grandmother, swept away as they returned from a hospital appointment.

Lacking a child's coffin mourners simply wrapped the body of the five-year-old in a yellow scarf and laid her on a woven sack next to her grandmother's white coffin.

Relief workers expect to bury more in the days to come.