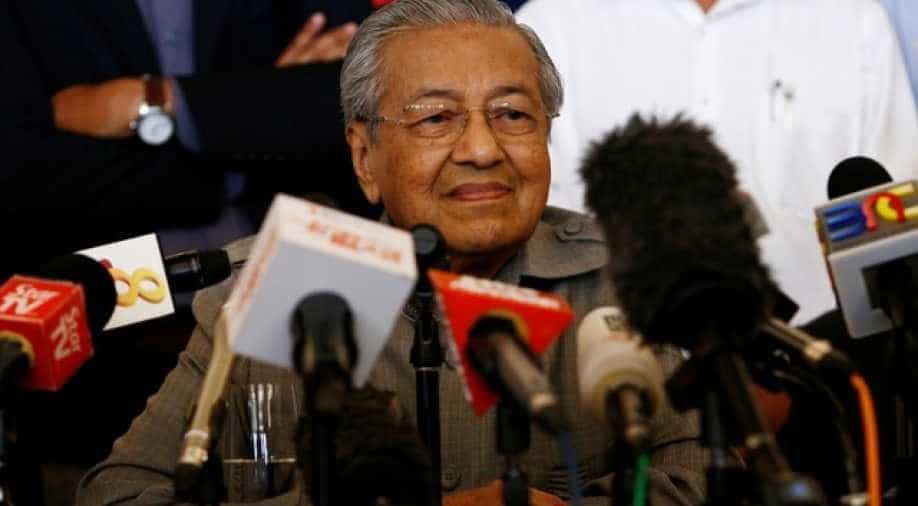 Malaysia's&nbspMahathir&nbspMohamad has never lost an election campaign. He maintained that record and created another one on Thursday when, at 92, he was set to be sworn in as the world's oldest elected leader.

"Yes, yes, I am still alive," a sprightly looking&nbspMahathir&nbspsaid at a 3 a.m. news conference in which he claimed victory over the Barisan Nasional (BN) coalition that has ruled the Southeast Asian nation since independence six decades ago.

Mahathir&nbspled the coalition as Malaysia's prime minister for 22 years, starting in 1981. As one of the country's most eminent leaders, he was pugnacious, uncompromising and intolerant of dissent, but turned Malaysia from a sleepy backwater into one of the world's modern industrialised nations.

He was never far from the headlines in retirement, and two years ago he came back to active politics, this time in the ranks of the opposition, vowing to oust his protege Najib Razak from the prime minister's chair over a financial scandal at the state investment fund 1Malaysia Development Berhad (1MDB).

In his crusade,&nbspMahathir&nbspeventually quit the ruling United Malay National Organisation (UMNO) party, which he had helped build, and ceded all his government advisory roles.

"During his time, I was a strong opponent of&nbspMahathir," said Joseph Paul, 70, a retired social worker who joined thousands of people in the capital Kuala Lumpur to celebrateMahathir's win.

"Well, politics they say is the art of the possible, so if he comes in to get rid of another evil, why not?"

Official results early on Thursday showed that&nbspMahathir's Pakatan Harapan (Alliance of Hope) had won 113 of parliament's 222 seats, clinching the simple majority required to rule in the country's most stunning election result. The nonagenarian is scheduled to be sworn in as prime minister later in the day.

In his earlier stint as prime minister,&nbspMahathir's aggressive diplomacy needled countries like Britain and the United States, with comments such as one, on the eve of his retirement, that Jews ruled the world by proxy.

He was once described as a "menace to his country" by financier George Soros, whom&nbspMahathir&nbspfamously derided as a "moron" in an attack on foreign currency traders during the Asian financial crisis of 1998.

He also spent years squabbling with his old rival and another towering figure in Asian politics, the late Singapore leader Lee Kuan Yew.

Mahathir&nbspgrew up in the rural heartland of Malaysia, then a British colony, witnessing severe food shortages during the 1930s Great Depression.

Mahathir&nbspwas a medical doctor before becoming Malaysia's fourth prime minister in 1981 and kicking off a mission of modernisation.

Bridges and six-lane highways crisscrossed Malaysia in his development blitz, capped off with a lavish new administrative capital, and the world's tallest structure when it was built, the 88-storey Petronas twin towers in the capital, Kuala Lumpur.

The activity helped win&nbspMahathir&nbspthe title "Father of Modern Malaysia," but he was known for his strongarm rule, although he fell short of some southeast Asian peers in ruthlessness.

Mahathir&nbspused security laws to put his political opponents behind bars. His critics say he restricted free speech and persecuted political opponents - none more so than his former deputy, Anwar Ibrahim, who remains in jail on charges of sodomy and corruption.

Mahathir&nbsphas joined hands with Anwar in this campaign and has promised to seek a royal pardon for him. He has vowed to then step aside and let Anwar be prime minister.

Mahathir&nbspwas masterly in playing to the feelings of the mainly Muslim ethnic Malay majority. His 1970 book, "The Malay Dilemma", argued that ethnic Malays, whom he called the nation's rightful owners, were being eclipsed economically by ethnic Chinese.

Faced with a leadership challenge after just five years in office,&nbspMahathir&nbspdetained more than 100 opposition politicians, academics and social activists without trial, under internal security laws.

During the 1998 Asian financial crisis, he took a huge gamble in tackling twin economic and political crises by sacking Anwar and then going against the advice of the International Monetary Fund to impose capital and currency controls that saved the economy.

Anwar took on&nbspMahathir, turning overnight into an opposition politician, bringing tens of thousands of people onto the streets, shouting "Reformasi".

Anwar was later charged with sodomy and corruption, but&nbspMahathir&nbspdenied orchestrating the charges. After his release, he was jailed again during Najib's rule on the same charges.

Mahathir&nbspcontinued to wield power in UMNO even after he handed over in 2003. He backed Najib, the son of Malaysia's second prime minister, as the premier in 2009.

But in 2015 he urged Najib to step down over the corruption scandal at state fund 1MDB.

In an interview in March, he said he would keep up the battle against Najib even if he lost this election.

"I will be in my late 90s and physically not as strong," he said. "But if I am well enough, I will continue the struggle."

He also seems to have accepted he made mistakes in rule, writing in a blog post in January that people and the media never failed to point out he presided over an authoritarian government for 22 years.

"Looking back now, I realise why, as Prime Minister of Malaysia I was described as a dictator,"&nbspMahathir&nbspwrote. "There were many things I did which were typically dictatorial."