As Omicron spreads and cases soar, the unvaccinated remain defiant 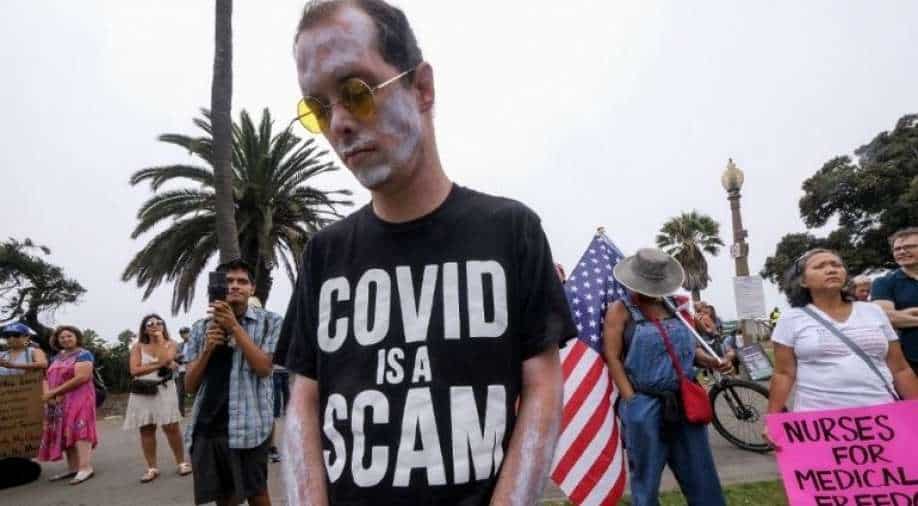 In the year since the first shots began going into arms, opposition to vaccines has hardened from skepticism and wariness into something approaching an article of faith for the approximately 39 million American adults who have yet to get a single dose

As a fast-spreading new strain of the coronavirus swarms across the country, hospitals in Ohio running low on beds and staff recently took out a full-page newspaper advertisement pleading with unvaccinated Americans to finally get the shot. It read, simply, “Help.”

But in a suburban Ohio cafe, Jackie Rogers, 58, an accountant, offered an equally succinct response on behalf of unvaccinated America: “Never.”

In the year since the first shots began going into arms, opposition to vaccines has hardened from skepticism and wariness into something approaching an article of faith for the approximately 39 million American adults who have yet to get a single dose.

Now health experts say the roughly 15% of the adult population that remains stubbornly unvaccinated is at the greatest risk of severe illness and death from the omicron variant and could overwhelm hospitals that are already brimming with COVID patients. In Cleveland, where omicron cases are soaring, a hospital unit at the Cleveland Clinic that provides life support to the sickest patients is already completely full.

Compounding the problem, the pace of first-time vaccinations appears to be plateauing this month even as omicron takes hold, and the numbers of children getting vaccinated and eligible adults getting booster shots are lower than some health experts hoped. Around 20% of children 5-11 years old have gotten a dose of vaccine. And only around 1 in 3 fully vaccinated Americans has gotten a booster.

It is still too early to know whether spiking numbers of omicron infections in New York, the rest of the Northeast and the Midwest will be followed by a surge in hospitalizations and deaths. Early studies suggest the new variant may cause less severe illness than previous variants did.

But so far, the threat of omicron is doing little to change people’s minds. Nearly 90% of unvaccinated adults said the variant would not spur them to get shots, according to a recent survey from the Kaiser Family Foundation.

And some of the unvaccinated said that omicron’s wily ability to infect vaccinated people only reaffirmed their decision to not get the shot. Others say the virus’ changing nature has stiffened their resolve not to get it.

“It’s just another variant,” said Dianne Putnam, an unvaccinated resident of Dalton, Georgia, and president of her county’s Republican Party, who spent six days in the hospital this summer after contracting COVID-19. “Next year there’ll be another one. I mean, there’s going to always be different variants.”

Public health campaigns and employee vaccine mandates have made progress since the summer at reducing the ranks of unvaccinated fence-sitters, people without easy access to health care and those who were hesitant but persuadable.

The remaining ranks of unvaccinated Americans steadfastly opposed to getting a shot tend to be younger, whiter and more Republican than those who have received the vaccine or are still considering one, surveys have shown.

At least 6 million first doses have been given in December since omicron was first detected in the United States. But those numbers come with a caveat: Boosters can sometimes be misclassified as first doses, potentially leading to an overcount of how many Americans are getting their first shots, the Centers for Disease Control and Prevention has warned.

Booster shots, now the preoccupation of many state and federal health officials, have made up a greater portion of the roughly 1.5 million doses administered each day around the country in recent weeks. The rate of first doses given was similarly sluggish in the late summer, when roughly 300,000 were given each day, dropping even more before regulators authorized the Pfizer-BioNTech shot for young children in October, when the rate of first doses began climbing again.

The number of adults vaccinated has steadily grown since six months ago, when roughly 170 million had received a first shot, compared with around 220 million Saturday, an increase driven in part by mandates.

Low vaccination rates are still heavily concentrated in rural areas and the South, with Louisiana, Mississippi, Georgia, Arkansas and Alabama near the bottom. Those states have recorded around half of their population as fully vaccinated, well below the national rate of about 62%.

In interviews across the country, unvaccinated people said they had grown inured to public health messages from exhausted doctors and nurses and even pleas from their own families, as vaccinations have become entangled in the country’s politics. Even though mandates have been shown to significantly improve vaccination rates in places and at companies that enact them, they said they were dead-set against President Joe Biden’s efforts and had tuned out his appeals for Americans to get vaccinated as a patriotic duty.

“The nail in the coffin was when they said you had to get the vaccine. It definitely turned me away,” said Cyrarra Bricker, 26, a sales representative in Fort Worth, Texas.

The United States continues to see a stark partisan divide in vaccination rates, with more than 91% of adult Democrats receiving at least one shot, compared with about 60% of adult Republicans.

Over the past week, former President Donald Trump made two full-throated endorsements of vaccines that many of his supporters have rejected, drawing praise from Biden.

At an event in Dallas last Sunday, he argued that a shot in the arm was a way to help demonstrate that the three vaccines, which were developed while he was in office, were one of his great successes. Trump also promoted the vaccines in a video interview released this past week by The Daily Wire, a conservative media site, while also rejecting the idea of mandates.

“Forget about the mandates; people have to have their freedom,” Trump said. “But at the same time, the vaccine is one of the greatest achievements of mankind.”

Still, many members of right-wing media continue to spout anti-vaccine rhetoric and disinformation, dissuading many from getting the shot.

At the same time, Republican governors and attorneys general are fighting to block the administration’s vaccine mandates for federal contractors, health care workers and Head Start programs. Anti-vaccine activists have applauded moves by Gov. Ron DeSantis of Florida and Gov. Greg Abbott of Texas, both Republicans, to thwart vaccine requirements by schools or private businesses.

Dr. José R. Romero, the Arkansas health secretary, said his state’s vaccination rate, which is hardly budging, reflected how deep the opposition to the shot was among those left to convince.

“Unfortunately, we can’t say that we’ve identified a single thing that has really moved the needle in any great extent,” Romero said. “It’s just a slow chipping away at this. It’s sort of a mouse eating the elephant one bit at a time. And you just keep going.”

In Washington, as the Supreme Court is set to hear challenges to the Biden administration’s vaccine mandates, White House officials see few remaining policy levers to pull. Domestic airline passenger vaccination requirements are one of the few tools still at Biden’s disposal that could meaningfully increase the ranks of the vaccinated. But the administration does not have plans to enact them for now, senior officials said.

There were still glimmers of hope, he added. Some people fearful of omicron would take the leap. And unvaccinated Americans, he said, were still not a one-dimensional group. Some might need to just see more safety data, he said.

Like some other public health experts, Fauci said that a uniform federal vaccine passport system could be another resource. If more businesses and organizations asked for passports under that kind of program, he said, “a lot of people are going to realize that it’s so inconvenient not to be vaccinated that they might as well go ahead.”

But unvaccinated people like Eric Dilts, 45, a DoorDash delivery worker in St. Joseph, Missouri, said he felt like the imperfect nature of the vaccines and shifting messages from public officials about boosters and breakthrough infections had validated his skepticism.

“Now you need a first shot and second shot, and now they’re talking about all these boosters,” he said. “How many shots do you need? It seems like a joke to me.”

Unvaccinated Americans this year have made up the vast majority of severe cases and deaths from the virus, and health experts say getting vaccinated remains the best way to protect against severe illness and death. The unvaccinated are “much more likely to be in a hospital, and they’re much more likely to be taking up a bed that might be wanted” this winter, said Bill Hanage, a public health researcher at the Harvard T.H. Chan School of Public Health.

Instead, many of the unvaccinated have placed their faith in “natural immunity” in weathering COVID-19 so far, despite warnings from infectious disease experts that the body’s protections are not sufficient to ward off reinfection.

In Los Angeles, Marie Elena Rigo, 51, who contracted COVID in January, said she felt protected after testing for antibodies and was more skeptical of the vaccine after a flurry of recent breakthrough infections among friends and family. Her 11-year-old son tested positive Wednesday.

“He coughed on me last night when I hugged him,” she said. “I don’t feel scared. I never was scared.”

Dr. Luciana Borio, a former chief scientist at the Food and Drug Administration who advised Biden during the transition, said reaching the unvaccinated was now arguably “the hardest aspect” of the U.S. response — one that would require a change of course in federal and state priorities, such as reopening community vaccine sites or urging providers to put more focus back on first doses.

A spokesperson for the Department of Health and Human Services pointed to a wide-ranging vaccine public education campaign still underway at the agency, with special attention now to reaching young children and those in need of a booster. New ads this past week targeting rural, younger Americans featured the language: “When you’re done with COVID, it doesn’t mean it’s done with you.” Other ads targeting rural adults warned of the financial costs of contracting the virus.

In Cleveland, the COVID picture is one of the bleakest in the country. Intensive care units are crammed with patients with the delta variant, with a surge of new omicron infections looming. New infections in Cuyahoga County, which includes Cleveland, have grown by 234% in the past two weeks.

Ohio, where 60% of people have gotten at least one shot, now has the country’s highest rate of COVID-19 hospitalization, and doctors say emergency rooms and ICUs are running out of beds. They are being forced to call people in from holiday vacations as growing breakthrough infections whittle away at their staff levels.

There was just a single open bed in a sixth-floor intensive care unit at the main campus of the Cleveland Clinic on Thursday morning, where about 90% of ICU patients were unvaccinated. The demand for intensive care has gotten so great that when a bed opens up, nurses are cleaning rooms and moving patients themselves to make space for the next patient.

“It feels like it will never end,” said Claire Strauser, a nurse manager in the intensive care unit whose adult son still has refused her entreaties to get vaccinated.

Strauser said she will probably not see him over Christmas to reduce her own chances of getting infected and sidelined from a job she is devoted to.