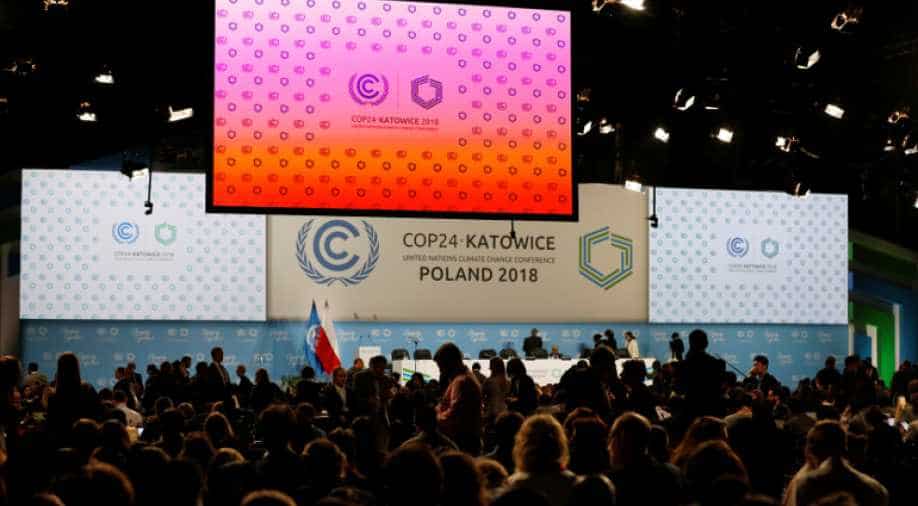 Nearly 200 countries at the United Nations talks in Katowice in the coal mining region of Silesia saved the landmark 2015 Paris Agreement from disintegration on Saturday by agreeing with a package of guidelines for its implementation.

Fractious climate change talks in Poland showed the limits of international action to limit global warming in a polarised world, putting the onus on individual governments, cities and communities to stop temperatures rising.

Nearly 200 countries at the United Nations talks in Katowice in the coal mining region of Silesia saved the landmark 2015 Paris Agreement from disintegration on Saturday by agreeing with a package of guidelines for its implementation.

But it deferred rules on carbon credits a spur to business and lacked any firm commitment to strengthen countries' emissions cut targets by 2020 when the agreement comes into force.

As such it left the parties a long way from the Paris deal's goal of keeping global warming below 2 degrees Celsius, let alone the cap of 1.5C needed to avert more extreme weather, rising sea levels and the loss of plant and animal species.

The world is heading for a 3-5C rise in temperatures this century, the UN World Meteorological Organization has said.

The Paris Agreement is based on individual commitments and expectations for the Polish talks to produce much more than rules for how those would be measured had always been low: the unity built in Paris had been shattered by a wave of governments placing national agendas before collective action.

Only a handful of country leaders were present in Katowice and the UN Secretary-General had to fly back to the meeting to urge progress.

"Political will is missing," Alden Meyer, director at the Union of Concerned Scientists, a non-profit science advocacy group said as the conference staggered towards a finish delayed for more than 24 hours by last-minute wrangling over parts of the text.

"But it provides the hooks for governments, cities, businesses, civil society etc to do the work to get (to the Paris Agreement goals)," he said.

For conference president Michal Kurtyka it was a job well done. "Mission accomplished," he wrote on Twitter. "Our children look back at our legacy and recognise that we took the right decisions at important junctures like the one we face today."

For nations already suffering from climate change the agreement, which did not make clear how pledged funding would be provided, was only just better than nothing. Simon Stiell, Environment Minister of Grenada in the Caribbean, told Reuters it "is barely scratching the surface of what we really require".

Investors said it would take more action at government level to persuade them to pump in the amount of money needed.

"Those countries ... who push ahead with ambitious, long-term climate policies will be the ones to reap the investment and economic advantages of doing so," said Stephanie Pfeifer, Chief Executive of Institutional Investors' Group on Climate Change, noting the low-carbon transition was already underway.

The United States, set to withdraw from the UN process at the behest of President Donald Trump, staged an event touting the benefits of burning fossil fuels, including coal, more efficiently, while back at home, Trump has termed the Paris deal "ridiculous".

A scientific report requested by the Paris signatories said the share of coal-fuelled power would have to be cut to under 2 per cent by 2050, along with big cuts to other fossil fuels, to stop temperatures rising more than 1.5C and causing devastating floods, storms, heat waves and drought.

The United States, as well as fellow oil producers Saudi Arabia, Russia and Kuwait, refused to "welcome" the report, a term sought by countries seeking to focus minds on its findings.

The final statement merely welcomed its timely completion and invited parties to make use of the information it contained.

Yet the row over the report was far from the only one: China, India, Russia, Australia, Japan, Brazil and the European Union were all drawn into various rifts, although China won some praise for helping to overcome concern, especially from the United States, that it would sidestep any rules.

"I think they have come a long way in recognising they need to provide confidence," Jennifer Morgan, executive director of Greenpeace International, said of the Chinese negotiators.

Describing Washington as "out of touch", Morgan noted the rules agreed in Poland nevertheless bound all countries, including the United States until its planned withdrawal in 2020, an achievement in itself.

"But that doesn´t substitute for the need to build ambition," she said.

Poland, hosting its third UN climate conference, came in for criticism for its commitment to coal, the most polluting of fossil fuels.

Szyszko had expressed doubts that global warming is manmade in the past and increased logging in the ancient forest of Bialowieza, declared illegal by the European Union's top court.

However, Kurtyka's job was complicated by Poland's environment minister says he did not want discussion about raising ambition at the talks and Poland's president vowing not to let anyone "murder coal mining".

A focus on technicalities in the first week was interpreted by campaigners as a pretext to avoid discussions on pledging deeper emissions cuts. Kurtyka got countries to focus on the guidelines near the end of the second week, but there was no collective action to harmonise or improve disparate pledges.

"Each delegation has its own domestic interests ... Our role, like the presidency, is to find balance, which ensures reaching a compromise," Adam Guibourge-Czetwertynski, Poland's chief negotiator, said in the second week of talks.

Poland's ruling party, the nationalist-minded Law and Justice (PiS), wants to scale back the share of coal in electricity production from 80 per cent to 60 per cent by 2030.

But the production of hard coal is expected to be stable for decades, although 72 per cent of Poles think it should be gradually phased out to reduce emissions, according to a survey by state-controlled pollster CBOS in November.

Katowice, the heart of Poland's coal region, is among the most polluted cities in Europe because many people heat their homes by burning low-quality coal, which is the cheapest. Residents say they have no choice.

"No climate decisions, even the best ones, will change the content of our wallets," said Maria Ligeza, an 83-year-old Katowice citizen. "Without help, people will be still burning what they have."