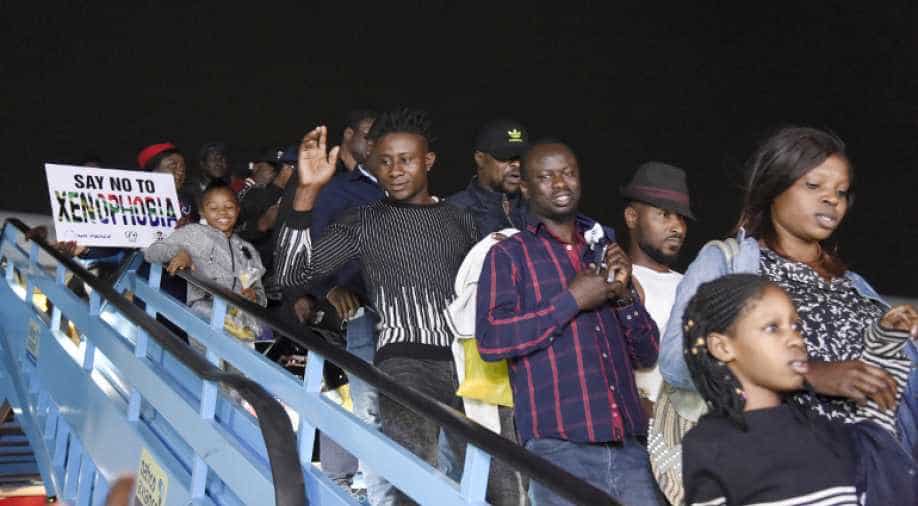 A man waves as he disembarks from a plane as a first group of Nigerians repatriated from South Africa following xenophobic violence arrives in Lagos, on September 11, 2019. Photograph:( AFP )

The UN refugee agency voiced alarm at the violence, which reportedly killed at least 12 people -- both foreign nationals and South Africans -- in and around Johannesburg earlier this month in a spate of attacks against foreigners fuelled by soaring unemployment and poverty

At least 1,500 foreign nationals have been forced to flee their homes in South Africa amid a surge in deadly xenophobic violence in the country, the United Nations said Friday.

The UN refugee agency voiced alarm at the violence, which reportedly killed at least 12 people -- both foreign nationals and South Africans -- in and around Johannesburg earlier this month in a spate of attacks against foreigners fuelled by soaring unemployment and poverty.

"At least 1,500 foreign nationals, predominantly migrants but also refugees and asylum-seekers, have been forced to flee their homes," UNHCR spokesman Charlie Yaxley told reporters in Geneva.

He said the agency's staff had in recent weeks received "a significant increase in calls to our telephone hotlines, with people reporting that their homes and businesses have been looted, buildings and property have been set on fire."

They were also receiving reports of "increased gang activity on the streets and rising incidents of sexual and gender-based violence," he said.

South Africa, the continent's second-largest economy, is a major destination for other African migrants. But they are often targeted by some locals who blame them for a lack of jobs.

"Many refugees are now too afraid to go to work or carry out their day-to-day trade, despite having no alternative sources of income," Yaxley said.

Over the past two weeks, some 500 Nigerians have been repatriated amid the attacks in Johannesburg, including many directed at Nigerian-owned businesses and properties.

And according to the UN, some 800 people, mainly from Mozambique, Malawi and Zimbabwe, have sought safety in community halls in Katlehong.

"Many wish to return home, saying they no longer feel safe in South Africa," Yaxley said.

UNHCR, he said, was strengthening its response and operational presence in South Africa to work with the government and other partners to help ensure the refugees' safety.

"We are deploying additional staff and resources, including relief items, emergency shelter, psycho-social care, legal assistance and support with recovery of lost livelihoods," he said, adding that experts in child protection and sexual and gender-based violence were also being deployed.

"No effort should be spared to quell the violence and enforce rule of law," he said, insisting that perpetrators should be held to account.

He also called on "those with a voice in the public domain ... to ensure their language does not further inflame the situation."

Foreigners, he said, must "not become scapegoats for complex socio-economic challenges."