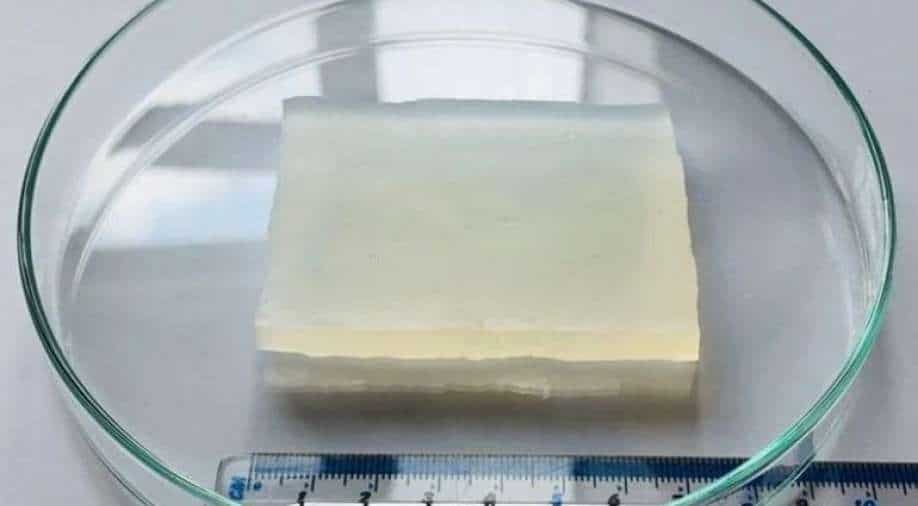 In this photo, squishy material of super jelly can be seen. (Image credit: University of Cambridge) Photograph:( Others )

The soft-yet-strong jelly is made of 80 per cent water. The remaining 20 per cent acts like hard glass on compression

Scientists have discovered a super jelly that can survive being run over by a car. The study published in Nature Materials, has been conducted by the University of Cambridge.

The soft-yet-strong jelly is made of 80 per cent water. The remaining 20 per cent acts like hard glass on compression.

Researchers believe it can be used in soft robotics as well as to improve the flexibility of cartilage replacements used in the human body.

"At 80 percent water content, you'd think it would burst apart like a water balloon, but it doesn't: it stays intact and withstands huge compressive forces," said Oren Scherman, one of the authors of the study.

"The properties of the hydrogel are seemingly at odds with each other."

Co-author and chemist Jade McCune said "The way the hydrogel can withstand compression was surprising, it wasn't like anything we've seen in hydrogels."

"We also found that the compressive strength could be easily controlled through simply changing the chemical structure of the guest molecule inside the handcuff."

Meanwhile, lead author Zehuan Huang said, "To the best of our knowledge, this is the first time that glass-like hydrogels have been made. We're not just writing something new into the textbooks, which is really exciting, but we're opening a new chapter in the area of high-performance soft materials."

"People have spent years making rubber-like hydrogels, but that's just half of the picture," says Scherman.

"We've revisited traditional polymer physics and created a new class of materials that span the whole range of material properties from rubber-like to glass-like, completing the full picture."