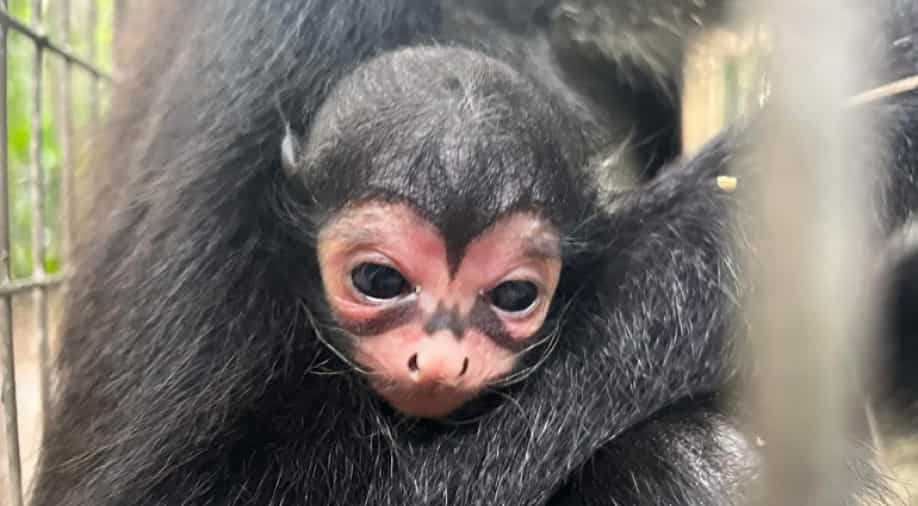 In this picture, a spider monkey with the 'Batman' symbol can be seen at the Brevard Zoo in Melbourne. Photograph:( Twitter )

A newborn spider monkey in an Australian zoo has a unique 'Batman' symbol on its face.

Making the announcement, the Brevard Zoo in Melbourne said, "While we do not yet know the sex of the baby, our animal care staff noted that the youngling is doing well, holding on strong to mom and nursing successfully."

“Keepers were surprised to see the baby’s unique markings, noting the resemblance to the Batman symbol!” it added in a statement.

The spider monkey's mother is a 31-year-old who is "a pro at caring for her offspring."

“Shelley has some experience in motherhood as well, having given birth to current troop members 19-year-old Tica, seven-year-old Prim, and two-year-old Olive. Her offspring Tica is expecting her own baby soon!”

''The baby is also the offspring of 25-year-old male Shooter, who has fathered several other members of our current troop: Olive, Prim, Daisy, and Blue Steel,'' the zoo added.

Other members of Shelley's troops are showing lots of interest in the newest member of the family as per the animal care staff at the Brevard Zoo.

Also read | Why do some humans love booze? This study on monkeys might give answers

According to the Brevard Zoo, ''every birth is a safeguard against losing these precious species in their natural range''.

The monkey and its mother are in a habitat of its rainforest revealed as per footage shared by the zoo on its YouTube channel.

Spider monkeys live in three connected living spaces in the zoo where visitors can watch them from a distance.

Black monkeys, which are facing the loss of habitat due and threats from the illegal pet trade, are found in the rainforests of Central and South America.