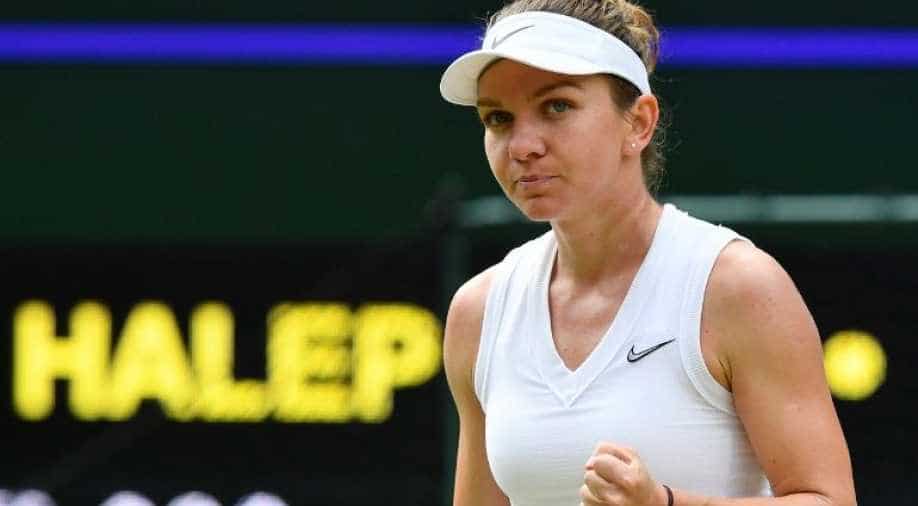 Simona Halep was supposedly having a 'chill' year, but for a little over an hour on Wimbledon's Centre Court the ice-cool Romanian was on fire as she swatted aside Victoria Azarenka 6-3, 6-1 on Friday to reach the fourth round.

Halep's form has understandably dipped since she won the French Open last year to lift the weighty millstone of several Grand Slam final failures and she said her intention in 2019 was to mentally ease off the throttle.

Yet any suggestion that her hunger had diminished was emphatically dispelled as she absorbed everything Azarenka could muster and then dismantled her fellow former world number one to progress for the loss of four games.

That statistic was all the more remarkable considering Azarenka, ranked 40th in the world, had broken in the fourth game of the first set to take a 3-1 lead, an advantage that was comprehensively erased.

Halep, who began the year as world number one, has slipped to seventh in the rankings, having reached the last eight only once in the last four majors, but there was plenty to suggest the claycourt specialist is a contender at the All England Club.

"I think was my best match this year. I played really well. I felt actually very confident. I've been aggressive all the match, even if I was 3-1 down first set," she said.

After suffering that early break, Halep won six straight games and from that point, there was no looking back.

Azarenka, who had dispatched her second-round opponent by winning 12 consecutive games, made only one further mark on the scoreboard against Halep, to level at 1-1 in the second set, before the Romanian put her foot to the floor to win five more games on the bounce.

She brought up three match points with a precise midcourt dropshot and, after spurning the first, put Azarenka out of her on-court misery, when the Belarusian netted a return.

For Azarenka, who only returned to the world's top 50 in February following the birth of her son at the end of 2016, it was a chastening experience.

Her frustrations were laid bare at times as she slammed her racket into the turf in the first set, receiving a code violation from the umpire, before she fell to her knees with head in hands after smacking a simple put-away into the net.

She later described the umpire's decision to apply the letter of the law when she threw her racket as "pathetic".

"It's like you have to be with no single emotion on the court, and that's just not tennis. I'm sorry, but it's not," she said.

Next up for ice-cool Halep is a potentially mouth-watering clash with Cori Gauff, providing the 15-year-old American can get past Polona Hercog.