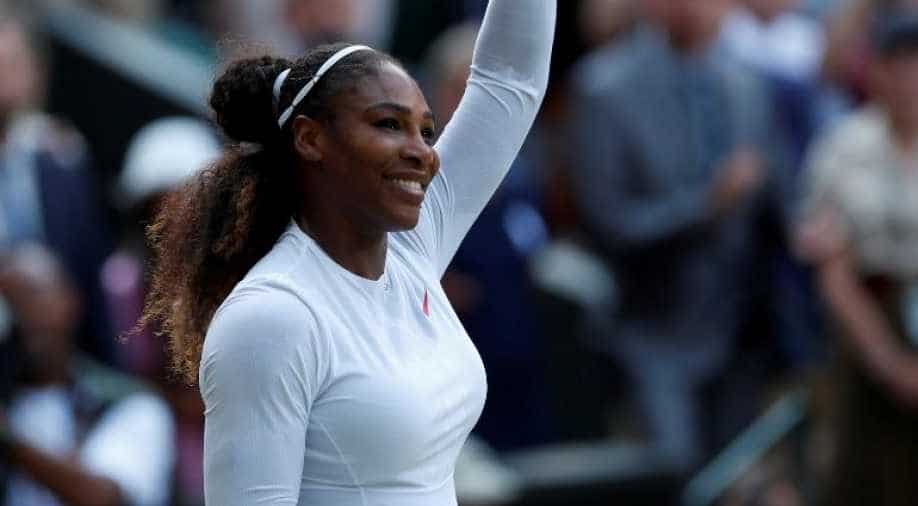 A diminished field of opponents at Wimbledon may make Serena Williams one of the favourites to win a record-equalling 24th Grand Slam.

A diminished field of opponents at Wimbledon may make Serena Williams one of the favourites to win a record-equalling 24th Grand Slam, but her long-time coach believes the only important factor is her own performance.

Injury concern for top-ranked Ashleigh Barty and the absence of world No. 2 Naomi Osaka and No. 3 Simona Halep - who beat Williams in the last Wimbledon final - have given the American an ideal opportunity to match Margaret Court's record haul.

But coach Patrick Mouratoglou said it was not about the opponents. "When Serena is (playing like) Serena, I don't know anyone that can stop her," he told Reuters.

"When I say being herself, first it's being able to play at her level, and second, having the mindset that made Serena who she is," he added.

"I respect the opponents. I'm just saying Serena is Serena. There is not one woman in the history of professional tennis that has a record like her ... When she thinks like Serena, when she processes like Serena, I don't think anyone can stop her."

The All England Club's lush green courts are a happy hunting ground for Williams, who has lifted the Venus Rosewater Dish seven times and also won the 2012 Olympics gold medal there.

While she also has seven Australian Open titles on Melbourne's hardcourts, the 39-year-old is unrivalled on grass - she reached the finals in her last four Wimbledon.

"She has a lot of qualities to play well on grass and she has been playing extremely well on grass courts over her career. It's all about being ready and being able to stay healthy for two weeks and perform," said Frenchman Mouratoglou, who has coached Williams since 2012.

Despite her run to the fourth round of the French Open, Mouratoglou said Williams was not ready for the claycourt major but was "getting there" for Wimbledon where she is seeded sixth.

Following Roland Garros, Williams returned to Mouratoglou's academy in Nice to prepare and was joined by elder sister Venus, a five-time major champion on grass.

Mouratoglou said the focus was on improving on-court movement for Williams. She also attended the graduation of students at the academy and gave a speech to inspire them.

"Her life has changed a lot. She's become a mother," Mouratoglou said. "It's more about bringing back that process that makes her refuse to lose and when she refuses to lose, she simply doesn't lose."

Mouratoglou is also a mentor to 17-year-old American Coco Gauff, who took Wimbledon by storm in 2019 when she beat Venus Williams on her way to reaching the fourth round.

Gauff has climbed to world No. 23 in her nascent career and is a potential fourth-round opponent for Williams.

"She (Gauff) can improve almost everywhere which is great. She's shown how incredible she can be in the future," Mouratoglou said, adding that a Williams-Gauff meeting would be a "good problem" for him.