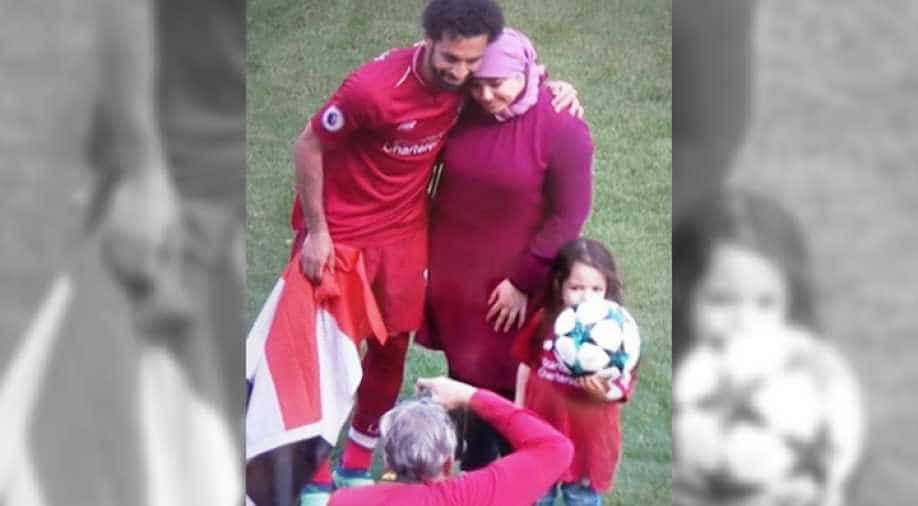 Mohamed Salah posing with his wife and daughter. Photograph:( Twitter )

Salah also broke the record for most goals scored in a 38-game Premier League season by scoring 32 goals. He also has scored 43 goals in 50 games in all competitions for Liverpool this term.

After winning the Premier League Golden Boot, Salah was celebrating on the Anfield turf with teammates.

While the Twitterati were awestruck after watching Salah playing with his beautiful daughter in the video that has gone viral on social networking sites.

Salah was taking pictures with his trophy and meanwhile, his four-year-old daughter Makka Mohamed Salah showed off her dribbling skills and earned the biggest cheers from the crowd.

When Mo Salah cheekily took the ball, he was jokingly booed from the stands.

A family affair as Mo Salah and his daughter take centre stage at Anfield #LFC pic.twitter.com/o7fi0jtgIH

I think you’ll love this video from the Anfield gantry. Mo Salah’s daughter stole the show. That moment when she realises that the entire crowd are cheering her! Then Daddy gets booed whilst holding his Golden Boot. Brilliant. ?? #MoSalah #LFC pic.twitter.com/QhUkRqYhL5

See how Twitter reacted to the video of Mo Salah playing with his daughter:

Can't believe after 44 goals in his debut season, Mo Salah found a way to get booed at Anfield haha.

Turns out the only person more popular than Mo Salah, is Mo Salah's daughter.

Well @MoSalah could never have thought he would be upstaged at Anfield this season, but his daughter Makka has just done exactly that. #LFC

Definitely a future candidate for @theofficialfwa Women's Footballer Of The Year. ... https://t.co/kzld68hEnW