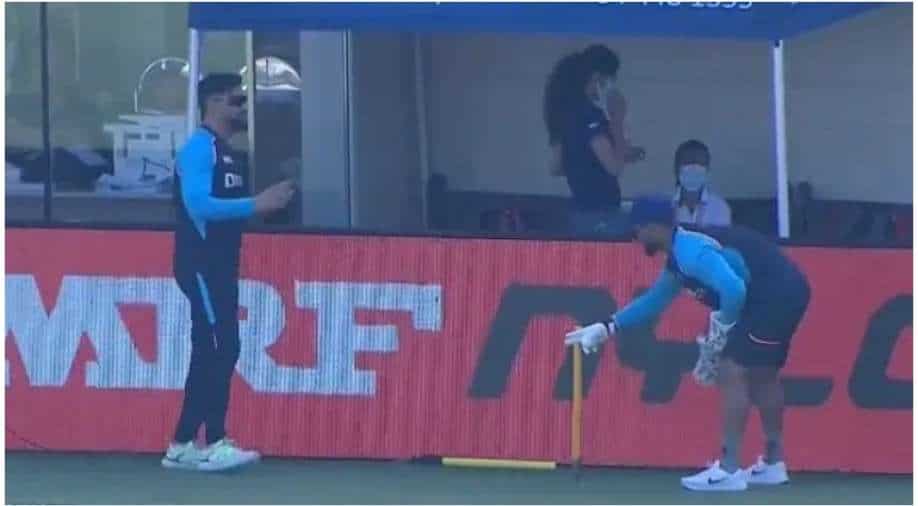 T20 World Cup: With India playing Australia in the warm-up game, mentor MS Dhoni helped Rishabh Pant with his wicketkeeping drills on the sidelines as the video went viral.

Virat Kohli's Team India are playing their second warm-up encounter on Wednesday afternoon (October 20), versus Australia, at the ICC Academy Ground, Dubai ahead of the main draw of the T20 World Cup 2021. The Men in Blue are trying to finalise their team combination and get their players some match-time ahead of the Super 12 round.

As Kohli opted out from leading India in the second warm-up match, Rohit Sharma came out for the coin toss and confirmed that Jasprit Bumrah and Mohammed Shami have been rested as well.

During Aaron Finch-led Australia's innings, as they opted to bat first, mentor MS Dhoni was seen assisting Rishabh Pant with his wicketkeeping drills on the sidelines. The video went viral in no time as the former Indian captain Dhoni was seen helping out his successor Pant, in a bid to hone his skills ahead of India's T20 WC opener, versus Pakistan on October 24 (Sunday) at Dubai. Here's the video:

Dhoni has been roped in as a mentor for Team India for the marquee tournament, in order to help Virat Kohli & Co. break their 8-year-old ICC-title drought and win their second title in the T20 WC history. It was under Dhoni when India won the inaugural edition, in 2007, in South Africa. Since then, the Men in Blue came close in the 2014 edition but ended as runners-up whereas the last edition saw them bow out in the semi-finals.

Talking about Pant, the swashbuckling left-hander was in good touch in the first warm-up fixture, between India and England, as his cameo (14-ball 29*) helped Kohli & Co. beat England by 7 wickets. His form in the middle and lower-order will be crucial for India in the tournament.

India are placed in Pool B along with Pakistan, New Zealand, Afghanistan whereas two other teams will join from the qualifiers.