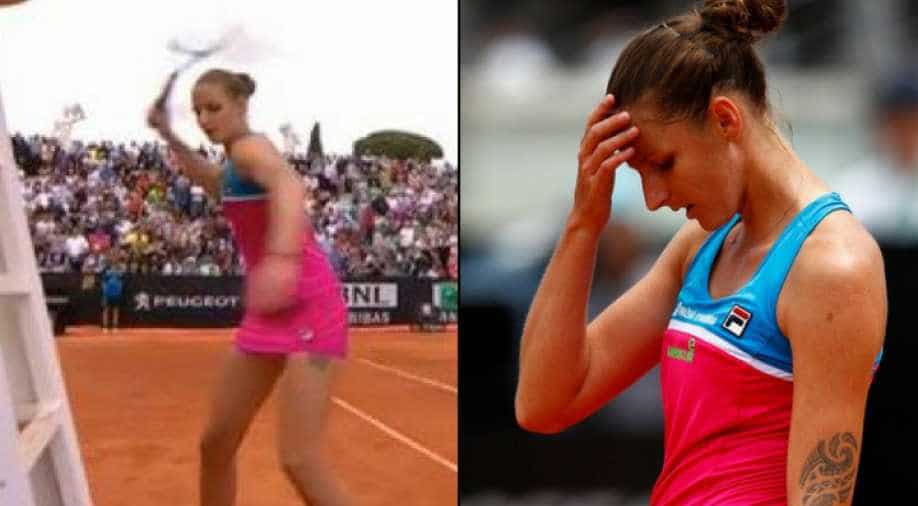 Former world number-1 Karolina Pliskova, 26, repeatedly hit the umpire's chair with her racket after losing her match to Maria Sakkari in the second round of the Italian Open surprising everyone in the crowd since the Czech player has no history of misbehaviour.

Greece's Maria Sakkari defeated Karolina Pliskova 3-6, 6-3, 7-5 in the second round of the WTA Italian Open, out of frustration, Pliskova furiously hammered the umpire's chair with her racket.

In the third set with the sixth-seeded Czech serving 6-3, 3-6, 5-5 (30/30) she had an overhead shot incorrectly ruled out and both the line judge and the umpire said they could not find the mark.

After vehemently arguing with the umpire to no avail Pliskova became furious as 42nd-ranked Sakkari was given the advantage and also a breakpoint at a crucial stage of the match.

Karolina Pliskova behaviour could attract a heavy penalty even the WTA hasn't announced its decision as yet.

Holy moly Pliskova is the real MVP! Well done, she was right about that call! it was 10km in! pic.twitter.com/YgJ5MHgmYo

Watch Pliskova arguing with the umpire:

. Can totally understand her frustration. Here is the call... #wtaRome #pliskova #sakkari pic.twitter.com/uDa04yt2O2

For Sakkari it was the first top-five win of her career and she will face the winner of the second-round match between 11th seed Angelique Kerber of Germany and Romania's Irina-Camelia Begu.

Spain reigns on top as Rafael Nadal second behind no.1 Carlos Alcaraz in ATP rankings