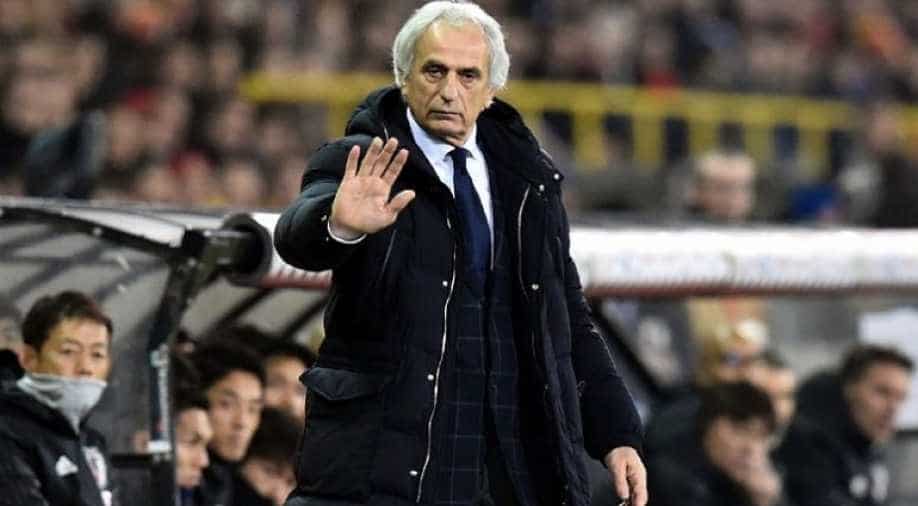 Former Japan coach Vahid Halilhodzic launched a lawsuit against the country`s football association and its president Kozo Tashima on Thursday, saying he was fired illegally just two months before the World Cup.

Vincent has suggested that Tashima, who personally flew to France to fire Halilhodzic in April, should resign over his handling of the dismissal.

Halilhodzic is suing Tashima directly because he believes the Japanese Football Association (JFA) president had acted illegally in dismissing him without consulting the association`s board.

The Tokyo District Court confirmed a civil suit was filed on Thursday, with the plaintiff being Halilhodzic and defendants being the Japan Football Association and Tashima.

"We cannot comment as we have not seen the letter of complaint," a JFA spokeswoman said.

"There are media reports that we have been sued for defamation. But we don`t believe there are facts that constitute defamation. There are no problems in the process of terminating the contract with former coach Halilhodzic.

"The process of paying remuneration in full for the rest of the duration of his (originally contracted) term has already been completed, based on the contract.

The decision was officially ratified by the JFA board last week but Vincent says this has come too late.

"We were quite shocked after president Tashima decided to terminate Vahid`s contract," Vincent told Reuters.

"We realised he took this decision without any prior approval of the board of the JFA, which is an infringement of the article of recuperation of the JFA.

"It is quite stunning to see the president, the man in charge of the organisation, take such a decision without any respect for the rules.

"If I was them I would seriously consider his resignation for this. It is amazing."

The lawyer added that they had sought clarification on the decision by the JFA but were yet to receive an acceptable response.

Halilhodzic is also demanding a personal apology from Tashima and a nominal fee of one Japanese yen ($0.009) as compensation.

"For Vahid it was `okay, we are talking about honour and honour has no price, you cannot buy it`," Vincent added.

"So he thought, well maybe it is worth one yen. Vahid thought that as the JFA is a public interest organisation, asking for a huge amount of money doesn`t make sense because it is not why he is doing it.

"Vahid has said `I want my honour back and so you need to apologise first and acknowledge that you did something wrong to me. It is not acceptable so apologise.

"`For my honour, one yen please. I am sure president Tashima has one yen in his pocket.`"

Halilhodzic was replaced by Akira Nishino in early April after being at the helm since 2015 and successfully guiding the Samurai Blue through World Cup qualifying for the tournament in Russia.

Tashima claimed at the time that the 66-year-old`s dismissal was due to his `lack of communication`.

"If there are certainly other reasons why president Tashima decided to terminate then okay, fine, but I think it is too much to say it is just because of lack of communication," Vincent added.

Japan, led by Halilhodzic`s successor Nishino, will face Colombia, Senegal and Poland in Group H at the June-July tournament.