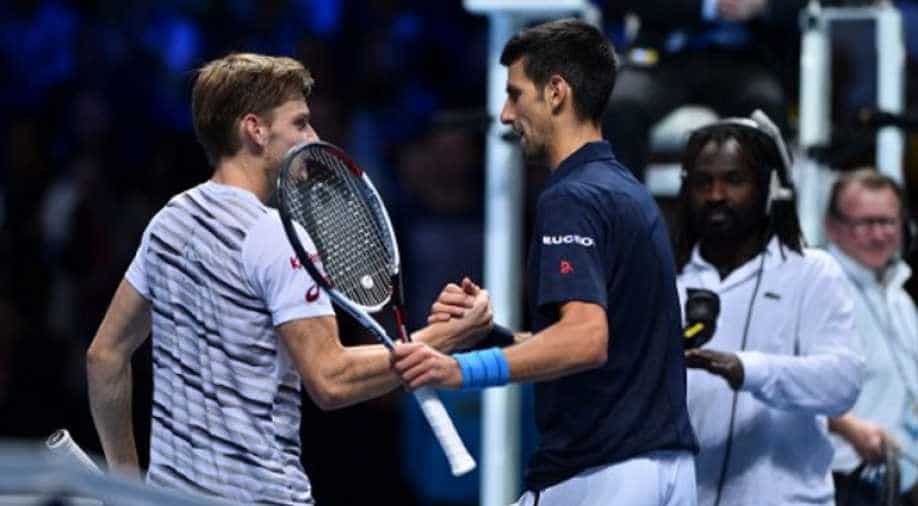 Novak Djokovic crushed David Goffin 6-1, 6-2 at the ATP Tour Finals on Thursday as the world number two kept his foot on the gas in the race to finish the year atop the world rankings.

Djokovic had already qualified for the semi-finals as group winner, but the Serb was keen to keep the momentum going in his bid to overhaul world number one Andy Murray and he took just 69 minutes to demolish Goffin at London's O2 Arena.

The 29-year-old has been in a prolonged slump since winning the French Open for the first time in June, sparking rumours about his private life and questions about his recent involvement with a 'spiritual guru' as he lost the top ranking to Murray.

But the decline is all relative as Djokovic has now won 21 of his last 22 matches at the Tour Finals, keeping him on course to win the tournament for a fifth successive year and record-equalling sixth time in total.

It is also the fourth time in the last five years that Djokovic has won all three of his group matches at the Tour Finals.

Djokovic is now 70 points ahead of Murray in the ATP's 'as it stands' rankings, although he already knew winning the tournament would give him the year-end pole position whatever happened against Goffin.

Tour Finals debutant Dominic Thiem and Wimbledon finalist Milos Raonic meet later on Thursday in a shoot-out to determine who qualifies for the last four alongside Djokovic.

Murray faces Stan Wawrinka in his last group match on Friday knowing a victory would guarantee he qualifies as group winner, thus avoiding a clash with Djokovic before the final.

Goffin was a late replacement for the already eliminated Gael Monfils, who pulled out of his last group match to avoid aggravating the rib injury that has troubled him for several weeks.

The Belgian, up to a career high 11th in the world rankings, had been paid £80,000 ($99,000) to hang around the O2 Arena all week as one of the tournament's on-call substitute players, but even that sum might not have made up for acting as a punch bag for Djokovic.

Djokovic had won all four of his previous encounters with Goffin and he quickly took control again with a break in the fourth game of the first set.

Not for the first time this week, Djokovic cut a tetchy, brooding figure and after being given a time violation for taking too long between serves he had an animated conversation with both the umpire and tournament supervisor as he complained about not being given a warning first.

Controlling his emotions was proving tricky, but Djokovic was in complete command of his play and he broke again to take the first set with ease.

Djokovic was in ruthless mood and breaks in the third and fifth games of the second set effectively ended the contest.