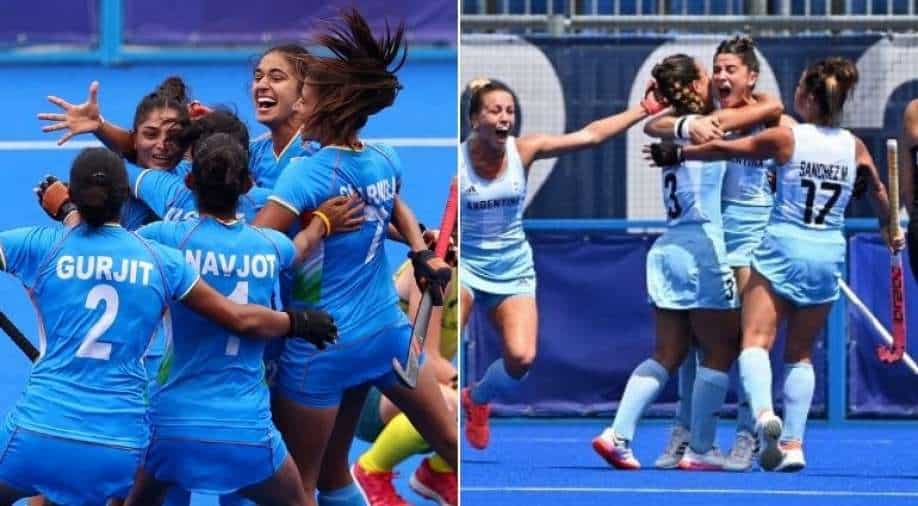 After defeating three-time Olympics gold medallists Australia in the quarter-final, the Rani Rampal-led team reached semis for the first time at Olympics.

Indian women's hockey team will lock horns with Argentina in the semi-final with an aim to assure a historic medal at the Tokyo Olympics 2020 by making its place in the summit clash. After defeating three-time Olympics gold medallists Australia in the quarter-final, the Rani Rampal-led team reached semis for the first time at Olympics.

Indian was off to a disappointing start in their Tokyo campaign, as they began with losses against the Netherlands (5-1), Germany (2-0) and Great Britain 4-1).

The team then picked up the momentum and defeated Ireland (1-0) and South Africa (4-3) in back-to-back clashes in Pool A. They had entered the quarter-finals, thanks to Great Britain's 2-0 win against Ireland in their last Group A clash.

If the Indian team manages to win, it will be the first time they will contest the gold medal match, with their previous best showing being a fourth-place finish in 1980.

Argentina's women team have never won an Olympic hockey gold medal, but clinched silver at the 2012 London Games and the 2000 Sydney Games, the latter being where they earned the nickname Las Leonas, or lionesses.

This celebration of the #IND women’s hockey team after defeating world no. 2 #AUS had us all go through a rollercoaster of emotions! 👏🔥

Here are some details about India vs Argentina semi-final clash:

India vs Argentina in the semi-final:

In the semi-final clash, India will face Argentina after the South Americans made their way to the last four with a 3-0 win over Germany. They got past the quarter-finals for the first time since 2012.

India and Argentina's run at the Tokyo Olympics:

Both India and Argentina have played six matches before the semi-final. India won three and lost the other three matches. On the other hand, Argentina won four and lost two clashes.

India: The Indian women’s hockey team is on a three-win streak now. They have defeated Ireland and South Africa in the group stage before knocking out Australia in the quarters. They however lost to Netherlands (5-1), Germany (2-0) and Great Britain (4-1) earlier,

Ahead of the Olympics, the Indian women's hockey team toured Argentina and had disappointing results. While playing against the senior team, India managed one draw and lost the other two matches.

Goals so far at Tokyo Games

Argentina: Defender Agustina Gorzelany scored three penalty-corner goals in the six matches she has played so far. Forward Agustina Albertarrio is also an asset for the team.

"We have to keep fighting," Argentina's Maria Victoria Granatto said. "We are going to play one of the most important games of our lives."

"We didn’t have much experience the last time we competed at the Olympics in 2016. We knew we had to go there and play well but weren’t aware of the level of competition that we faced. This time I know the expectations are more from the people as our performances over the past few years have been good,"India's Savita Punia said.