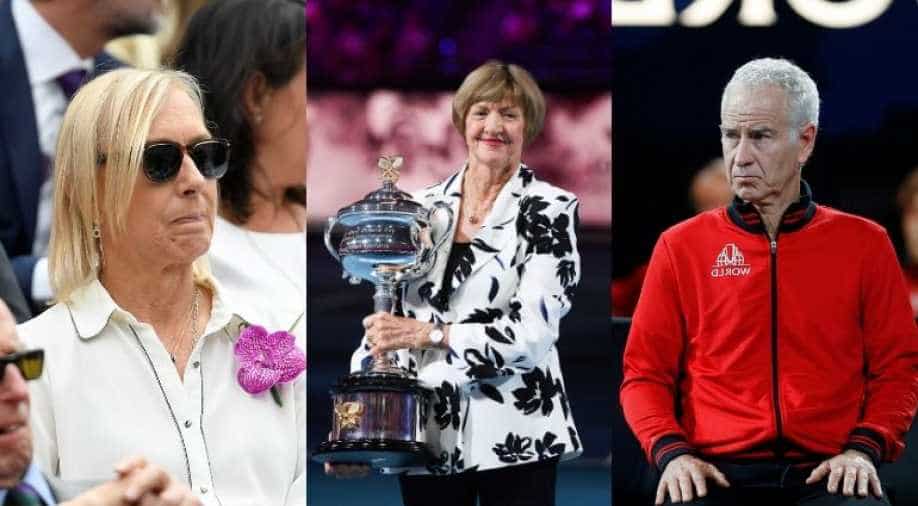 Tennis legends Martina Navratilova and John McEnroe protested against all-time great Margaret Court for her homophobic views on court at the Australian Open as authorities swiftly clampdown on the raging controversy.

Martina Navratilova hijacked a vacant umpire's chair to use the mic for addressing a small crowd, however, her microphone was cut off in between after she started speaking. After that, both John McEnroe and Martina Navratilova unfurled a banner which read 'Evonne Goolagong Arena'.

Looks like @Martina got up onto the umpire's chair at the end of her match today to make a speech. Unfortunately the stream on Eurosport cuts off just after the first words. pic.twitter.com/p4eI9krT1F

The duo called for changing the name of the Australian Open's second show court named after Margaret Court and demanded the stadium be renamed "Evonne Goolagong Arena".

Evonne Goolagong is an Australian Aboriginal tennis player, she is a seven-time Grand Slam champion.

Navratilova who is openly gay, and has campaigned for gay rights has been a constant critic of Margaret Court for her thoughts on the subject.

The Grand Slam organisers (Tennis Australia) have condemned Navratilova and McEnroe for the protests, terming it a "breach of protocol".

Navratilova had finished contesting a legends' match and then climbed into the umpire's chair to address the crowd "I've been speaking out about an issue for a while now and John McEnroe is here to join me and push the conversation forward," she said, before the TV feed was cut.

"We embrace diversity, inclusion and the right for people to have a view, as well as their right to voice that view, but the Australian Open has regulations and protocols with respect to how any fan, player or guest can use our facility, the event and the global stage it provides. This is to ensure the integrity of our event," Tennis Australia said.

"Two high-profile guests have breached these protocols and we are working through this with them," it added.

In a low-key ceremony just before Rafael Nadal and Nick Kygios' clash, Court was honoured at Rod Laver Arena on Monday as the day marked 50th anniversary of her 1970 Grand Slam victory.

The netizens took to Twitter to support Martina Navratilova and John McEnroe's protest.