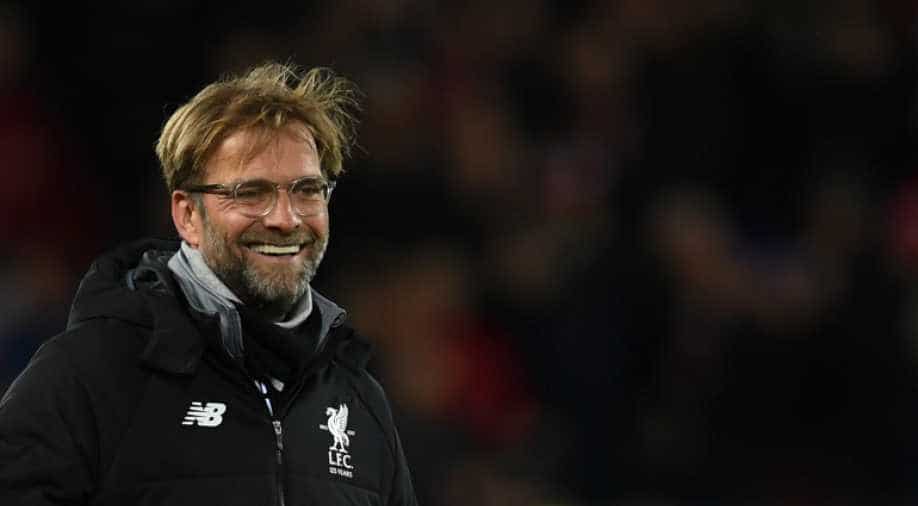 "I think it is an absolute dream draw -- for Manchester United fans," the German told reporters. Photograph:( AFP )

City are runaway leaders in the Premier League, with United currently second and Liverpool five points behind them in fourth.

If the Champions League draw hardly delighted Klopp, he suspected City were not too happy either and took a dim view of the likely rescheduling of the Liverpool derby against Everton as a consequence.

"I think it is an absolute dream draw -- for Manchester United fans," the German told reporters.

"I didn't expect anything, I didn't wish anything, I don't think it's good in the Champions League if you play against a team from your own country, but at one point it's pretty clear you will play them," he added.

"It didn't matter who we got, I knew it would be difficult. And it's difficult. Manchester City will be difficult. It doesn't look like Christmas and Easter in the same day."

Pep Guardiola's City side face United in the league in between the two legs of the European tie and could potentially clinch the title against their local foes.

Manchester City's director of football Txiki Begiristain told the club website (www.mancity.com) that the draw had thrown up difficult opponents, who beat his side at Anfield in January after losing 5-0 at the Etihad last September.

"We like to travel and to go to another country in the Champions League but it is what it is," he said.

"We know each other very well, they are a very offensive team, the truth is it is going to be a great couple of games and we are going to see good football."

The first leg will be played at Anfield on April 4, with the return on April 10.

Klopp said he had caught sight of Begiristain's face after the draw was announced and he "didn't look like it was Christmas".

The rescheduling of the Merseyside derby from April 8 to April 7 has yet to be confirmed but Klopp said he had heard that it would be.

"Sometimes, the associations will cancel the fixture to help, but not in this case," he said. "We play Wednesday night v Man City and then play Everton at 12.30 three days later... Not too cool, but we do it the hard way."