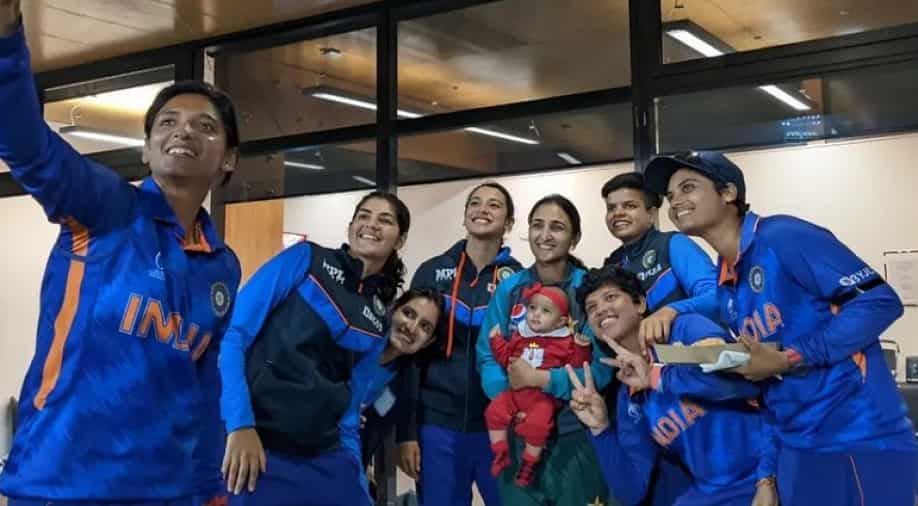 Indian opener Smriti Mandhana has hailed Pakistan captain Bismah Maroof as an inspiration for female athletes across the globe for returning to cricket just six months after giving birth to her daughter Fatima. Maroof is leading Pakistan in the ongoing ICC Women's ODI World Cup 2022 in New Zealand and has been accompanied by her daughter for the entire tournament.

The Indian women's team players were spotted playing with Maroof's daughter post their game against Pakistan in the Women's World Cup on Sunday (March 06). The Indian players also posed for selfies with Fatima and their heartwarming gesture was appreciated by many on social media.

In awe of Marood's dedication to motherhood and her love for the game, Mandhana took to Instagram to share a story for the Pakistan women's team captain. Mandhana called her an inspiration for returning to international cricket just six months post pregnancy.

"Coming back post pregnancy in 6 months and playing international cricket is so inspiring. @bismahmaroof setting an example for sportswomen across the globe. Lots of love to baby Fatima from India and I hope she picks the bat just like you because lefties are special," Mandhana wrote. 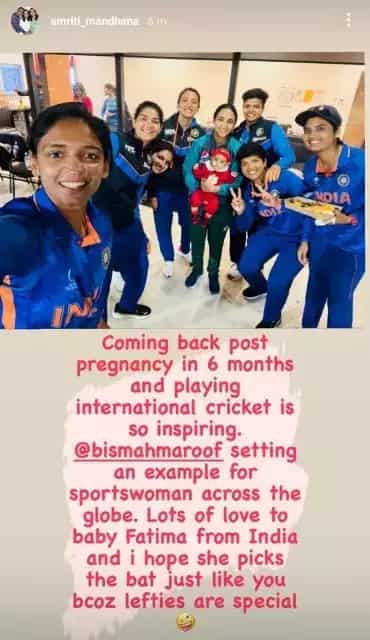 Mithali Raj-led Indian women's team thrashed Pakistan by 107 runs in their opening game of the ICC Women's ODI World Cup 2022 to get their campaign off to a flyer. Batting first, India rode on half-centuries from Mandhana (52), Sneh Rana (53) and Pooja Vastrakar (67) to post a strong total of 244 runs on the board.

In reply, Pakistan were skittled out for a platry 137 runs as Rajeshwari Gayakwad combined with Rana and veteran Jhulan Goswami to run through their batting line-up. While Gayakwad was the pick of the bowlers for India with a four-wicket haul, Jhulan and Rana picked up two wickets apiece. India will take on hosts New Zealand in their next game on March 10.