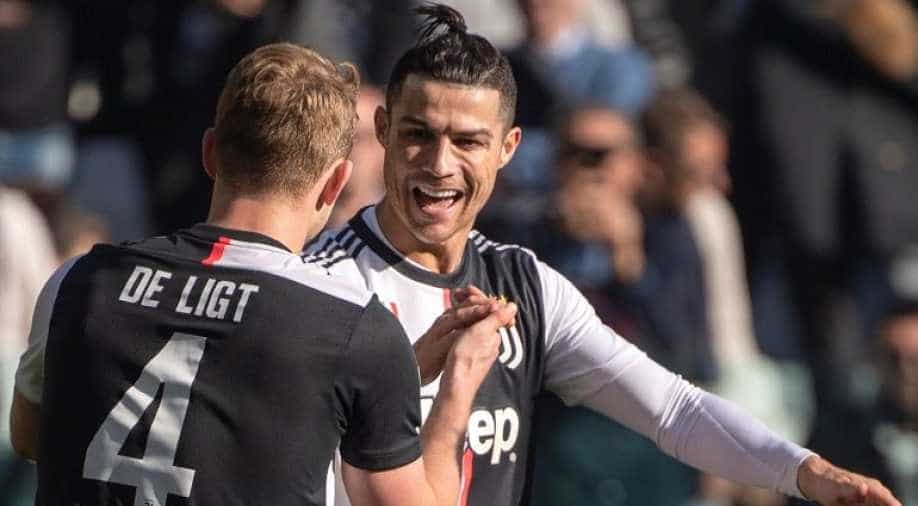 Inter Milan, one point behind the Romans in third place, travel to Udinese later on Sunday looking to reclaim second spot.

Cristiano Ronaldo stretched his scoring streak to nine consecutive league games with a penalty double as Serie A leaders Juventus bounced back from their defeat to Napoli with a 3-0 win over Fiorentina whose owner said Sunday's result left him feeling "disgusted".

Lazio moved second, five points behind the reigning champions after Serie A top scorer Ciro Immobile and Felipe Caicedo both scored a brace in a 5-1 win over rock bottom SPAL.

Inter Milan, one point behind the Romans in third place, travel to Udinese later on Sunday looking to reclaim the second spot.

Good to get back to victories and happy to score again in our stadium!⚽⚽
Proud to reach 50 goals with the bianconeri shirt!💪🏽#finoallafine #forzajuve pic.twitter.com/pzBrER9Uzt

Ronaldo slotted in his goals in either half in Turin with Dutch defender Matthijs de Ligt heading in a third in injury time.

Juventus had fallen to just their second defeat of the season last weekend at coach Maurizio Sarri's former club Napoli.

"Cristiano Ronaldo continues to score repeatedly and for him it's important psychologically," said Sarri of the player who turns 35 next Wednesday.

Fiorentina, in 14th position, have had a resurgence since Giuseppe Iachini took over on December 24, but suffered their first league defeat this year.

Club president Rocco Commisso was furious at the penalty decisions.

"I am disgusted with what I saw today," blasted the Italian-born US businessman who bought the Tuscany club last year.

"Today they gave two penalties against us, maybe the first was there but the second certainly wasn't."

Juventus vice-President Pavel Nedved hit back, declaring he was "a bit fed up of these controversies".

"Juve won with merit. Teams have to stop trying to look for excuses and accept defeat."

Five-time Ballon d'Or winner Ronaldo slotted in the opener five minutes before the break after German Pezzella's handball was confirmed by VAR.

His second came 10 minutes from time for a disputed Federico Ceccherini foul on Rodrigo Bentancur, making it 14 goals in nine games to bring his tally to 19 this season, including seven penalties.

He also becomes the first Juventus player to achieve a run of goals in nine consecutive league games since David Trezeguet in December 2005.

The former Real Madrid player has now scored 50 goals in 70 games since moving to Juventus in 2018.

De Ligt nodded in a Paulo Dybala cross in stoppage time for his first goal for Juventus at the Allianz Stadium.

- Lazio maintain title push -
Ronaldo is second only this season to Immobile who now has 25 goals as Lazio kept alive their push for a first Scudetto since 2000.

Immobile volleyed in after just three minutes, with Caicedo finishing off a rebound less than quarter of an hour later.

Immobile's second came before the half hour mark with a deflected shot and he then played a role in Caicedo's second seven minutes before the break.

Substitute Bobby Adekanye came on after the break with the former Liverpool player tapping in his first Serie A goal.

Atalanta moved fourth despite being held 2-2 by struggling Genoa, going ahead of Roma on goal difference after the side from the capital fell 4-2 at Sassuolo on Saturday.

Behind Cagliari, Parma and AC Milan have 32 points.

For Milan, midfielder Daniel Maldini, 18, made his Serie A debut to follow in the footsteps of his father, club legend Paolo, and grandfather Cesare.

Lecce earned their first home win this season to move three points clear of the relegation zone, with new signings Alessandro Deiola and Antonin Barak getting the first two goals.