Serie A: Juventus back on top after beating Inter, Ronaldo features in 1,000 games 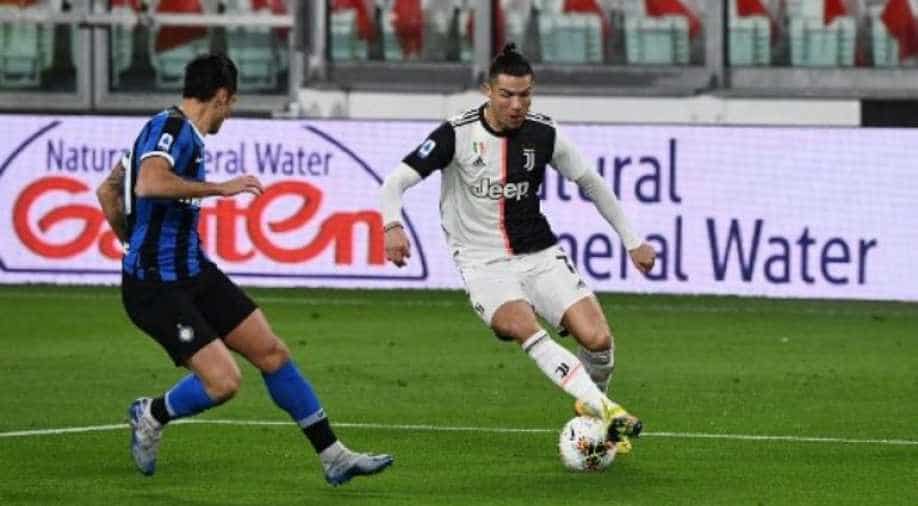 Inter Milan's Italian midfielder Nicolo Barella (L) vies with Juventus' Portuguese forward Cristiano Ronaldo during the Italian Serie A football match Juventus vs Inter Milan, at the Juventus stadium in Turin on March 8, 2020. The match is played behind closed doors due to the novel coronavirus outbreak. Photograph:( AFP )

Aaron Ramsey and substitute Paulo Dybala's goals secured the top berth for the Biancori side.

Juventus are back to their winning ways and top the Serie A table after beating Inter Milan 2-0 Derby D'Italia fixture in an empty Allianz Stadium.

Aaron Ramsey and substitute Paulo Dybala's goals secured the top berth for the Biancori side.

Also read: Serie A: Fixture delayed due to confusion over Italian Sports Minister's post calling for suspension of league

Italy will witness empty stadiums during their top-flight games until April 3. The lockdown has taken place as a preventive measure to stop the on-going novel coronavirus outbreak.

Though Cristiano Ronaldo failed to net the ball for the first time in 12 league match, he was also a highlight of the match as he has reached an impressive milestone, the Portuguese football legend has got 1,000 career appearances al senior level for club and country.

This milestone was achieved in an empty stadium match against Inter Milan.

Serie A is forced to play the match behind closed doors as Italy has gone under lockdown due to the on-going coronavirus outbreak.

Ronaldo has featured in 1,000 games out of which 164 were for Portugal and 836 were for clubs such as Sporting Lisbon, Real Madrid and his current club Juventus.

So proud to reach 1000 official games in my career with a very important victory that put us on the top of the table again!💪🏽 Thank you to all my teammates, coaches, my family & friends and to my fans that helped me to reach this great achievement.

Italy's top league Serie A is under the radar the moment, especially after their sports minister took to Facebook to cancel the league.

The country has been under lockdown after being the worst-hit nation in terms of coronavirus outbreak outside China.

Italy's death toll from the novel coronavirus increased by 133 to 366 Sunday while the number of infections rose by a single-day record of 1,492 to hit 7,375.

The European nation has recorded the most deaths of any country outside China and the second-most COVID-19 infections in the world.