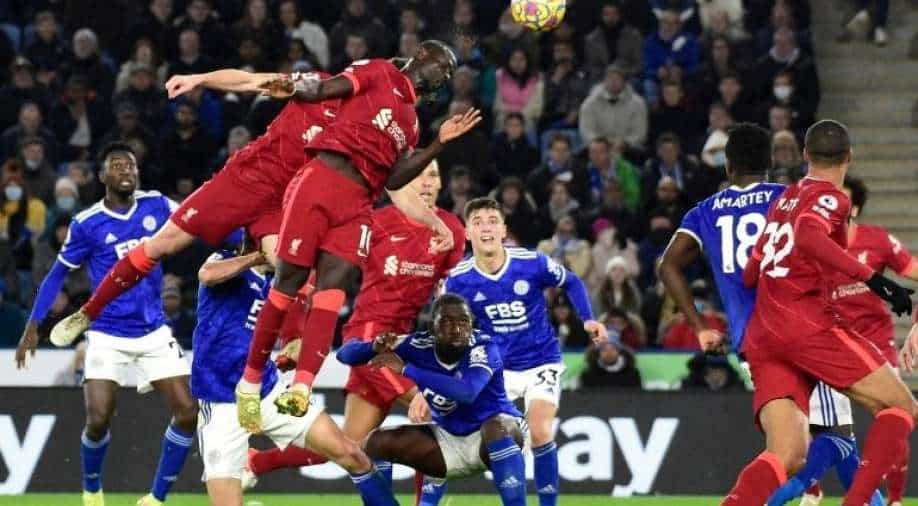 Antonio Conte became the first manager to go unbeaten in his first seven league games in charge of Spurs but he was left disappointed with a solitary point.

Wasteful Liverpool missed the chance to close the gap to leaders Manchester City after slipping to a 1-0 defeat to Leicester City in the Premier League on Tuesday.

Liverpool had a host of chances, including a Mohamed Salah penalty, but failed to score in the Premier League for the first time in 29 games as Ademola Lookman's second-half goal was enough for Leicester to snatch victory.

Tottenham Hotspur also endured a frustrating afternoon after they were held to a 1-1 draw at 10-man Southampton while West Ham United moved above them into fifth place after an impressive 4-1 victory at Watford.

With an additional few days break after their own Boxing Day clash against Leeds United was called off due to rising COVID-19 cases at the Yorkshire club, Liverpool looked much fresher than an injury-hit Leicester from the off at the King Power Stadium.

After dominating the early stages, Salah won a penalty but, for the first time in 16 Premier League attempts, failed to find the net, as Kasper Schmeichel made a fine save.

The chances kept coming, but the title-chasers' wastefulness proved costly as Lookman hammered home what proved to the winner in the 59th minute, moving Leicester up to ninth in the standings.

"Definitely, it was well deserved (for Leicester)," Liverpool coach Juergen Klopp told Amazon Prime. "It was a very strange game. We were just not good enough.

"We still had enough chances. What we did with the balls was just not right. We played a really bad game, so it was well deserved."

Antonio Conte became the first manager to go unbeaten in his first seven league games in charge of Spurs but he was left disappointed with a solitary point.

James Ward-Prowse gave the Saints a deserved lead midway through the first half, but the home side found themselves down a man after Mohammed Salisu tripped Heung-min Son to concede a penalty and pick up a second yellow before the break.

Harry Kane converted the spot kick, and the England captain had a superbly taken second ruled out for a narrow offside in the second half.

"We have to be disappointed because you have to exploit the situation against 10 men," said Conte.

"To play after 44 hours is not easy because you need to recover from the last game. Maybe the fatigue caused bad decisions especially when we arrived in their box," he added.

West Ham hadn't won in three league games and Watford went into the clash after seeing their last two games postponed due to COVID-19 cases.

The Hornets got off to the perfect start when Emmanuel Dennis fired them into a fourth minute lead with a fine left-foot effort from the edge of the box.

But West Ham responded superbly and drew level in the 27th minute with a first-time drive from Tomas Soucek who connected with a fine pass from Jarrod Bowen.

Two minutes later, Said Benrahma put the visitors ahead, drilling home after Michail Antonio had cut in from the left and slipped the ball into the Algerian's path.

The impressive Bowen had an effort ruled out by VAR but the Hammers did double their advantage through a Mark Noble penalty and substitute Nikola Vlasic completed the rout, slotting home after more good work from Bowen.

Frenchman Odsonne Edouard scored one and created two for Palace as they easily dealt with Dean Smith`s Norwich at Selhurst Park.

The former Celtic forward opened the scoring with a sixth minute penalty and then set up Jean-Philippe Mateta for the second.
It was 3-0 shortly before the break when Edouard danced into the box through a crowd before the ball fell to Jeffrey Schlupp, who smashed home.