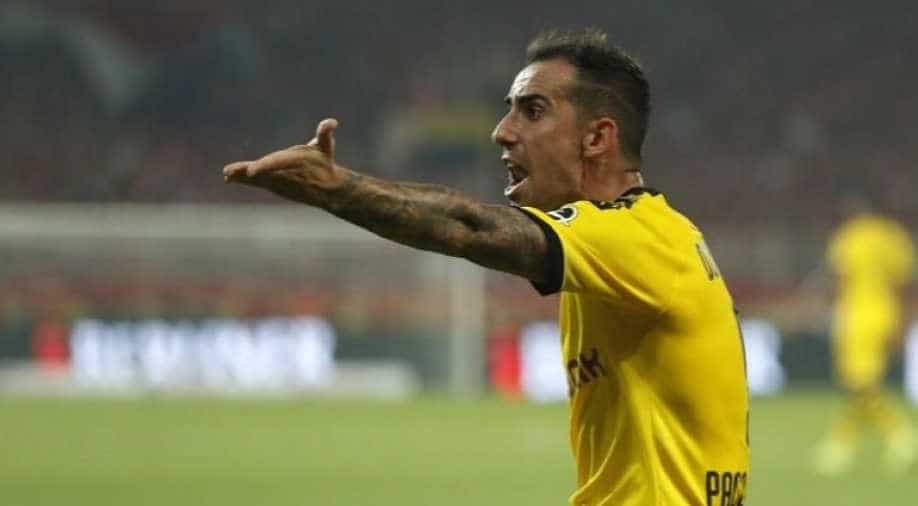 Alcacer, 26, joined Dortmund in 2018 after struggling to hold down a place in the first team in two seasons at star-studded Barcelona

A former bench-warmer at Barcelona, Borussia Dortmund sharpshooter Paco Alcacer is hoping to hurt his former club when the two teams meet in the Champions League on Tuesday.

Alcacer, 26, joined Dortmund in 2018 after struggling to hold down a place in the first team in two seasons at star-studded Barcelona.

He has flourished in the Bundesliga, bringing a killer instinct to Dortmund's young attack and regaining his place in the Spanish national team.

The striker now faces Barcelona in the middle of a purple patch for club and country, having scored 10 goals in his last eight matches.

His opener in a 4-0 win over Bayer Leverkusen last Saturday means he has scored in every game for Dortmund so far this term.

He also picked up three goals for Spain in Euro 2020 qualification wins over Romania and the Faroe Islands last week.

Alcacer's electric form is reminiscent of his explosive start to life at Dortmund as a loanee at the beginning of last season, when he fired in a record-breaking seven goals in his first four games.

That run prompted Dortmund to shell out 23 million euros to sign him on a permanent deal, and marked a turning point in Alcacer's career.

"It is a liberation to be playing, getting time on the pitch and enjoying my job," said the Spaniard at the time.

He had just arrived from two frustrating years at Barcelona, in which he was kept out of the team by an iconic attacking trio of Lionel Messi, Luis Suarez and Neymar.

After a move from boyhood club Valencia in 2016, he made just 23 starts for the Catalan giants, and played a full 90 minutes in just 10 matches.

Yet as he prepares to meet his former team mates in Dortmund on Tuesday, Alcacer has insisted he has "no regrets" about his time in the Catalan capital.

"It will be a special game. It will be a joy to play against my former team, and it makes me want to play well," he told Barcelona newspaper Sport last week.

The 26-year-old said that despite his struggles, he learned a lot at the Camp Nou.

"When you play for Barca, you play high up the pitch and there is very little space. Before, I was quite slow in my decision-making, but now I can make quick decisions in tight spaces. I learned that at Barcelona."

That sharpness has certainly shown this season, as all five of Alcacer's Bundesliga goals so far have been first-time finishes.

While he insists there is no bad blood between him and Barcelona, the Spaniard has not ruled out celebrating if he scores against his former club on Tuesday.

"A lot of people treated me very well at Barcelona. I don't know what I will do (if I score). The joy will be huge," he told Sport.

If he does celebrate, it will be in trademark fashion, with his eyes and index fingers raised to the heavens.

The celebration is a tribute to Alcacer's father, who died suddenly of a heart attack shortly after watching his son's professional debut for Valencia in 2011.

"I know it would have made him happy to continue to watch me play," Alcacer told Westfaelischer Anzeiger newspaper last year.

The striker is determined to keep his career on an upward curve, and is eyeing silverware with Dortmund after narrowly missing out on the Bundesliga title last year.

"It is not enough to come second," he told Sky in August.

No doubt he intends to come out on top this Tuesday, and show Messi, Suarez and co. what they are missing.