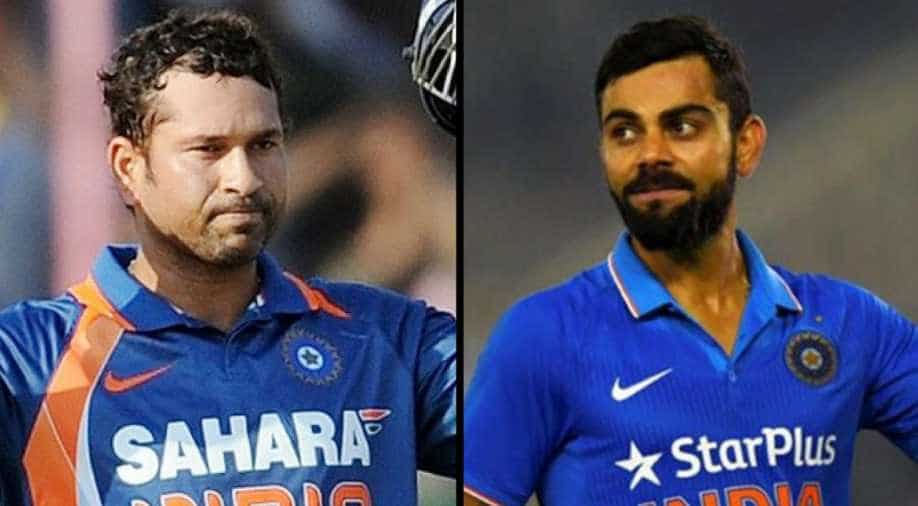 I will be just 30% of Sachin when I'll be great, says Virat Kohli. Photograph:( Others )

This is the moment of king Kohli. He is just decimating bowling attack mercilessly. When he scored his third century in the recent ODI series with South Africa, eminent commentator Harsha Bhogle quipped on TV “when did you last see a batsman dominating to such an extent”. I know the most obvious answer; it was Sachin Tendulkar during 1998 and I am sure that each cricket freak of my generation must have thought the same. Later in the day, Bhogle himself tweeted that the Kohli’s dominance nowadays is akin to Tendulkar’s in 1998.

Exactly twenty years back in the calendar year of 1998, Sachin Tendulkar was on a roll, he was dominating, scoring runs at will and routing each and every bowling attack in the world.

First look at the numbers. Tendulkar played in 34 ODIs in 1998 and scored 1894 runs at a colossal average of 65.3 and with the whopping strike rate of 102. He smashed 40 sixes in all, but the most impressive fact is that he scored 9 ODI centuries and 7 ODI half-centuries in a single calendar year of 1998. In 5 Test matches, Sachin scored around 650 runs with an average of 80 plus and with 3 centuries.

You must be in awe of these unbelievable numbers, but trust me, it's just the tip of the iceberg as far as the splendor of Sachin-1998 is concerned. The main essence of Tendulkar’s heroic in 1998 is the way he pulverized best of bowling attacks and the consistency with which he pulled matches for his country and bailed his side out of the crunch situation.

So what happened in 1998? What or who triggered this onslaught?

Well, there is a bit of story behind it. Tendulkar replaced Azhar as Indian captain in 1996. He was the heir apparent for years before he got the baton from Azhar. Sachin’s success as captain, however, was rather tepid. India lost the Test series in South Africa and in West Indies. In a Test against Sri Lanka at Colombo, Sri Lanka scored 950 runs in a single Test inning.

Tendulkar was sacked from the captaincy towards the end of 1997. Tendulkar was taken aback; he was disappointed the way selectors snubbed him, hurriedly.

Years later Tendulkar confessed his disappointment unequivocally in his biographical film Sachin: A Billion Dreams. Sachin was hurt, pained and all that was vented out through his bat during 1998. Moreover, he was free from the pressure of captaincy.

Sachin Tendulkar in 1998 is all about larger than life performances by him, spellbound Cricket fraternity and interesting anecdotes which created a bona fide cult around the great man.

Australians were first, who has fallen prey to the Tendulkar’s juggernaut when Australia visited India for a Test series (3-Test) after a gap of close to 12 years. Tendulkar was prepared. He toiled hard at the net and on rough pitches to counter hyper leg breaks of Warne. At Chennai during the first Test, Tendulkar pivoted the Indian victory by scoring a swashbuckling 155 in the third inning of Test. During that time, Shane Warne had been troubling best of world’s batsmen with his insane turn after pitching the ball way outside the leg-stump. Warne was awestruck when Tendulkar dispatched similar deliveries into the stands during that knock.

Warne later confessed that he used to see Sachin in dreams, hitting him ruthlessly. That was the time when fraternity was indulged in a discussion “Brain Lara vs Sachin Tendulkar, who is best among them”. Warne endorsed that Tendulkar is a notch above Lara.

In April 1998, Tendulkar smashed two ODI centuries at Sharjah against Australia in a span of three days, which unarguably are among the finest ODI innings by an Indian. The first century put India into the final from a gloomy situation and second won the final for India.

It was ruthless hitting at Sharjah. I remember how Tony Grieg was going bonkers in the commentary box every time Tendulkar dispatched ball over the rope.

Tendulkar was so dominant in 1998 that Sir Don Bradman commented that he found Tendulkar’ batting pretty close to his own. In the same year 1998, Don celebrated his 90th birthday and Tendulkar along with Warne was the special invitee at his residence in Adelaide.

Later, Dennis Lillee told something very interesting about that carnage at Sharjah. Australian fast bowler Michael Kasprowicz went to the great Lillee for some tips to get Tendulkar out early in the innings. Lillee told him point-blank “Dude, the kind of form Tendulkar is in, you shouldn’t even think of getting him out. You just plan to save some runs against him”.

Ajay Jadeja once narrated a very interesting incident about Tendulkar in 1998. During a triangular series at Sharjah during November 1998 in a match against Zimbabwe, Tendulkar was rattled by a short pitch delivery of fired up young pace bowler Henry Olanga. When Tendulkar came back in the pavilion, Jadeja smirked and insinuated his failure. Tendulkar smiled and replied, “Buddy, wait till the next match”.

The very next match was the final against Zimbabwe. Zimbabwe scored 196 runs in the first inning. India scored 197 in just 30 overs without losing a single wicket. Tendulkar scored 124 not out at the strike rate of 135. Olanga learned some lesson on pace bowling from Tendulkar as he went for 50 runs in 6 overs.

A few years later in an interview, Indian coach during 1998 Anshuman Gaikwad spoke about Tendulkar in 1998. He said that in Chennai Test when India started his third inning, Anshuman told the team that a quick hundred from any of the batsmen would bring India back in the game. Tendulkar immediately reverted “Don’t worry coach; I will do the job for you”.

Similarly, in Sharjah in April 1998 when India was struggling in the last league match against Australia, Tendulkar again told Anshuman that he would do the job.

So, in 1998, Tendulkar has not only scored runs, he also knew that he was going to score runs. That was the level of his self-confidence.

1998 was undoubtedly Tendulkar’s year in the Cricket. The impact was so deep that even today if in any discussion 1998 is referred; I recall that it was the year when our master blasters blitzed.