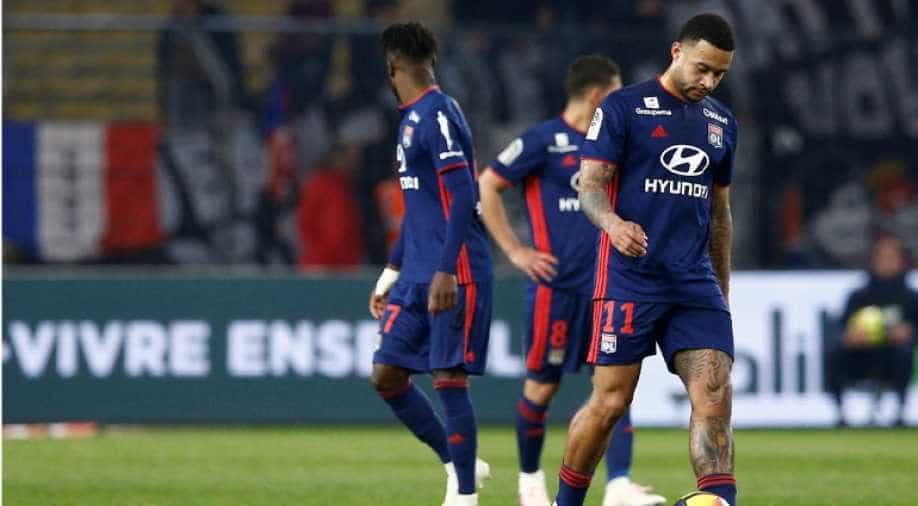 Memphis Depay and Martin Terrier found the back of the net in the first half to put Lyon, who had lost their three previous games in all competitions, on 59 points from 33 matches.

Olympique Lyonnais returned to winning ways when they beat visiting Angers 2-1 on Friday to consolidate third place in Ligue 1.

Memphis Depay and Martin Terrier found the back of the net in the first half to put Lyon, who had lost their three previous games in all competitions, on 59 points from 33 matches.

The visitors pulled a goal back with one minute left thanks to Lucas Tousart's own goal.

Lyon trail second-placed Lille, who have a game in hand, by five points but lead fourth-placed St Etienne by six ahead of Les Verts' trip to Stade Reims on Sunday.

The top three in Ligue 1 qualify for the Champions League, with the third-placed team starting in the third qualifying round for Europe's premier club competition.

Depay started the game at the Groupama stadium after beginning the last two matches on the bench and he did not disappoint.

The Dutch forward collected Hassem Aouar's through ball before beating Ludovic Butelle with a powerful shot to put Lyon ahead after 14 minutes.

Aouar played Terrier through for the hosts' second goal six minutes into the second half.

Lyon's domination continued but Butelle pulled off several great saves to deny Depay and Terrier before Tousart diverted Angelo Fulgini's cross into his own net.

Earlier, Dijon beat Stade Rennais 3-2 at home to stay in 18th place, meaning they look set to take part in the relegation/promotion playoffs.

Leaders Paris St Germain will clinch the title if they beat AS Monaco at the Parc des Princes on Sunday.