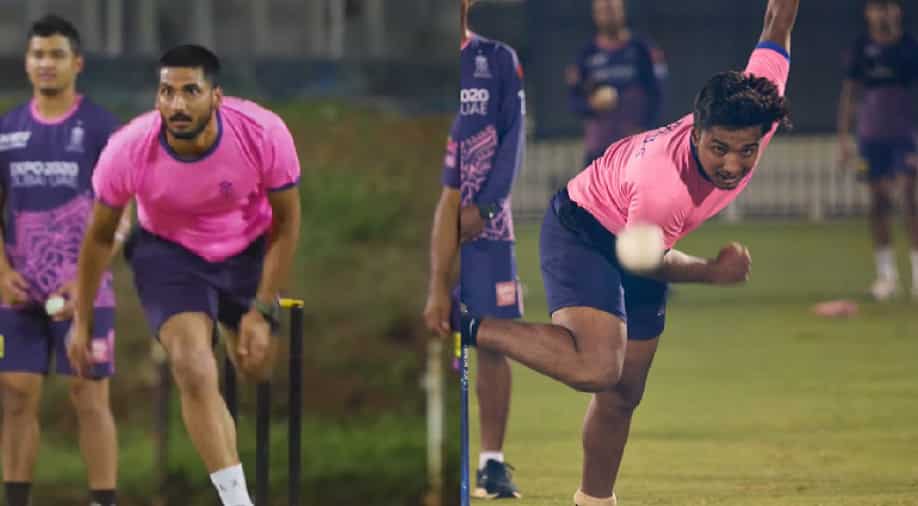 3 youngsters from Speedster program were selected as net bowlers for RR. Photograph:( Others )

Three youngsters who aced the Speedster challenge were picked up by Rajasthan Royals as net bowlers for IPL 2021 and are living their cricketing dream.

The Indian Premier League (IPL) has over the years provided several budding cricketers across India a platform to rub shoulders with the best in the world and showcase their talent and skills at the highest level. It remains a dream for many to bag an elusive IPL contract and ply their trade in one of the best T20 leagues in the world. However, not many get to live the dream of playing in the IPL or becoming a part of a top franchise in the league.

With thousands of young cricketers trying to make a name for themselves in India's vast and sophisticated domestic circuit, it often becomes difficult to spot talent at the grassroots level and nurture them properly. There have been numerous success stories in the IPL where players spotted at the local level by scouts have gone on to become heroes for their respective franchises and even represented team India at the highest level.

The likes of Hardik Pandya, Jasprit Bumrah and several others were not a big name in the Indian domestic circuit but were spotted by the scouts at the right time and were offered the platform to shine. To unearth more such stars and help them bridge the gap between the domestic circuit and the IPL, Red Bull has launched the Red Bull Speedster program which aims to find India's best fast bowling talents.

The Speedster program gives youngsters across the country a chance to showcase their talent and skills in qualifying rounds. Those who make it to the final go up against each other and the winner finally gets a chance to train with the Rajasthan Royals. The bowlers are judged based on raw pace, skills and accuracy. Three bowlers have so far been selected as net bowlers for the Royals after coming through the Red Bull Speedster program.

The three bowlers - Mohammad Shareem, Prateek Kumar and Preet Kanwar have been training with Rajasthan Royals as net bowlers and have been bowling against some of the best batsmen in the world including the likes of skipper Sanju Samson, Liam Livingstone and Evin Lewis among others.

Sharim and Pratik were selected at the 2020 Speedster and trained at RR's camp for three months before being selected as net bowlers for IPL 2021. Preet was selected earlier this year and made it as a net bowler for the UAE leg of the IPL 2021.

Pratik, who hails from the legendary MS Dhoni's hometown Ranchi, said it was a dream come true moment for him when he was selected as a net bowler for the Royals. Having bowled at some of the top batsmen in the RR nets, Pratik hopes to play in the IPL as a full-time player one day.

"It's such an honour that everyone desires for. I thank Red Bull Speedster contest for making my dream come true. A lifetime opportunity to experience the team atmosphere of such a big franchise like Rajasthan Royals," Pratik told WION.

"Of course, it's a big yes. Every player in India wants to have an opportunity to play IPL, as it's a huge opportunity for a youngster to leave his impact on cricketing world. A franchise such as RR always cherish the young talent in India. Hope to get an opportunity in domestic session, so that I can make it to the team one day," he added, when asked if he would like to represent RR in the IPL in future.

Sharim, who hails from Kanpur, Uttar Pradesh, found out about the Speedster challenge through a friend and it has since proved to be a game-changer for him. The talented youngster has already bowled at the likes of Ben Stokes, Samson and Chris Morris among others and is focused on learning as much as he can from his time with the franchise.

"A friend told me about this. Red Bull Speedster has been a game-changer for me.  Very helpful. Experience to train and practice with top international players too," Sharim told WION.

"I have bowled to every player of RR. Star players like Liam Livingston, Evin Lewis, Sanju Samson, Ben Stokes, Chris Morris, Glenn Philip etc," he added on his experience as a net bowler with RR.

As the young pace bowlers from small cities of India work hard towards their dream of playing in the IPL, former India cricketer Munaf Patel deserves the credit for spotting them at the right time and taking them under his wings. Munaf is the chief selector during the city-level qualifiers of the Speedster and is also working closely with the RR team management to look after the growth of the selected pacers.

The 2011 World Cup-winner with MS Dhoni-led India, believes the Speedster program can prove to be a game-changer for Indian cricket as far as fast bowling is concerned as it can help in identifying talent which often goes unnoticed.

"The platform provided by programs such as these can be a huge game-changer for the future of our country's cricket where fast bowling is concerned. This is a very good opportunity for the young ones who would otherwise go undiscovered," said Munaf, who played 13 Tests and 70 ODIs for India.

Munaf is hopeful of developing some future stars for the Indian cricket team and the Rajasthan Royals with the help of the Speedster program which not only identifies talent but also ensured they are nurtured properly.

"One might have talent but most of it does not see the light of the day just because of lack of opportunities. This initiative does not just stop at scouting talent but goes on to groom them and ensure they find just place in the world of cricket which is extremely important," said Munaf.

"I am positive that we will soon see a battery of bowlers in blue jersey who have come through Red Bull Speedster program," he added.