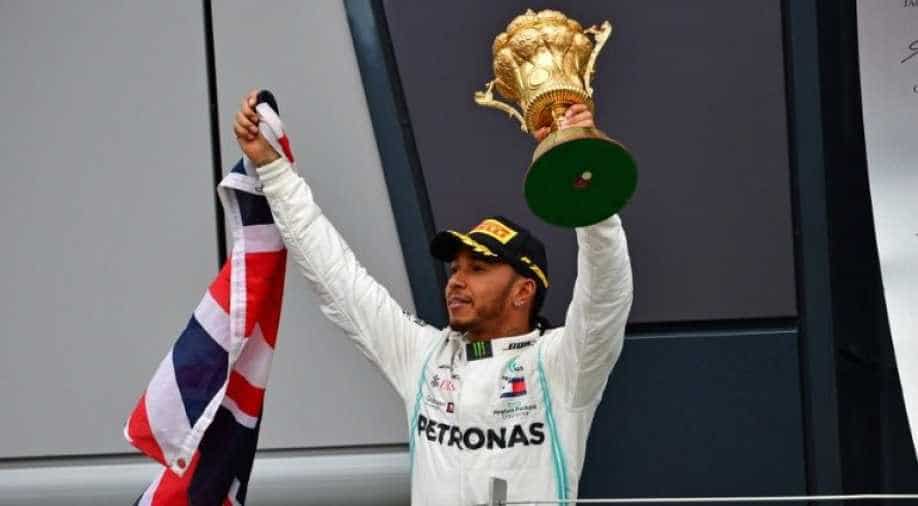 'This is the home of motor racing and these fans really give so much energy,' said Hamilton

Lewis Hamilton said the home crowd gave him the "energy" to help him claim a record sixth British Grand Prix victory ahead of his Mercedes teammate Valtteri Bottas.

The five-time world champion and current series leader made the most of a favourable and fortunate safety car intervention to record his 80th career victory in a thrilling and incident-filled race.

"This is the home of motor racing and these fans really give so much energy," he said.

"I couldn't have won this race without all these guys, their understanding and support, or without my team."

Hamilton smiled as he said he had little sympathy for his team-mate Bottas who was unable to translate pole position and an early lead into victory due to the timing of the safety car, after he had made the first of his two scheduled pit stops.

"It's motor racing," said Hamilton, who conceded his rival, now 39 points behind him in the title race, had been unlucky while he had been gifted a 'free' pit stop.

"That's what happens," he added.

Hamilton, who celebrated with his fans in a capacity sell-out 141,000 crowd, also said he ignored team orders to pit in the closing laps.

"I guess I had a pit stop window, but there's the entry to the pit-lane, the stop, the extra pressure on the engineers. Not that I doubt them, not at all," he said.

"I was like 'should I stop?' There were seven laps left and it's hard to catch a 21-second gap. So I decided, on the day, that was the best thing for me."

As if to show his belief in the tyres, he was able to record the race's fastest lap to claim an extra point.

'Belief in own ability'

"It's something I could never have dreamed of," he said.

"When I was eight years old, I didn't know what it was like to have money and fame. I always believed in my own ability and I want people to hold on to that."

Hamilton's victory was his seventh in ten races this year, but Bottas said it did not stop him believing he can overhaul him for the title.

"I don't know what to say, congrats to Lewis, he got a free stop and got past me there," said the Finn.

"Not really my day, but the pace was good. There are positives from yesterday, in qualifying, as I was quickest on track. I'll keep fighting this season, it's not over yet."

Charles Leclerc, who finished third, said the race was his most enjoyable since he entered Formula One last year.

"That was definitely the most fun I've ever had in my Formula One career," said Leclerc.

"I think every driver wants to race hard and we did during most of the race. It was very, very fun, always border-line, but, I think, within the rules and very enjoyable."