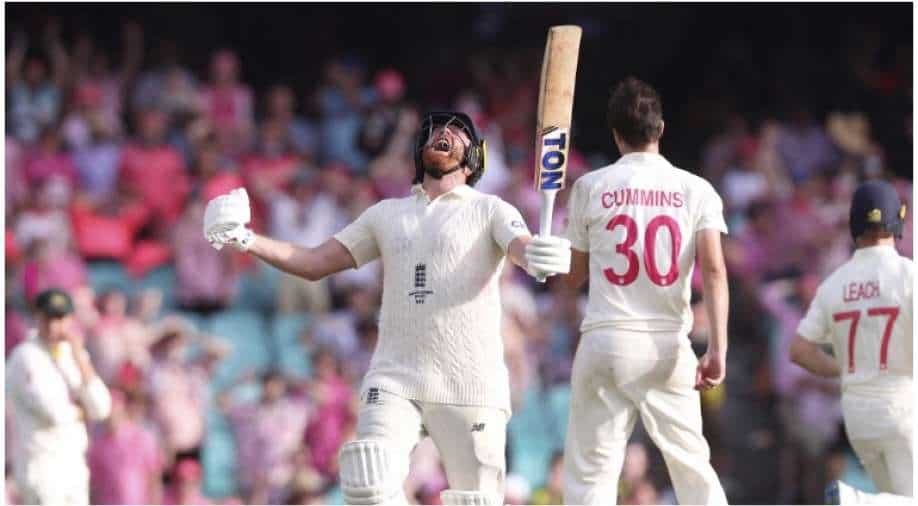 Middle-order batter Jonny Bairstow, playing his second Ashes game in the five-Test series, brought up the tourists` maiden century of the series.

An unbeaten century by Jonny Bairstow (103 off 140 balls) on another rain-interrupted day saw England post 258/7 on Day 3 of the fourth Ashes Test, even as Australia strengthened their advantage with the ball, with Pat Cummins and Scott Boland taking two wickets apiece at the Sydney Cricket Ground on Friday.

Middle-order batter Bairstow, playing his second Ashes game in the five-Test series, brought up the tourists` maiden century of the series, though will have work to do on Saturday, batting with the tail to close the 158-run first-innings deficit. Australia had scored 416/8 declared in the first innings.

Despite a delayed start, Australia came out firing with pacer Mitchell Starc bowling Haseeb Hameed (6) in just the fifth over of the first session.

Opener Zak Crawley and Dawid Malan survived the rest of the opening spell shared between Cummins and Starc, but they couldn`t deal with what came next. In his second over of the innings, the hero of the Boxing Day Test, Scott Boland gave the Sydney crowd plenty to cheer about when he pegged Crawley`s off stump, dismissing the England opener for 18.

Three overs later, the Australian quick continued his remarkable form in his debut Ashes series, removing captain Joe Root for a duck. Root failed to manage Boland`s delivery outside off stump, edging the ball to second slip for an impressive catch from Steve Smith.

With the lunch break in sight, things went from bad to worse for the visitors. Australia all-rounder Cameron Green claimed the scalp of Malan (3), who flicked the ball off his hip to Usman Khawaja at leg slip. Green`s delivery was the last of the first session as England headed into lunch 36/4 with all the work to do.

After 10 overs without scoring a run, including the loss of three wickets, England began their fightback with Ben Stokes and Jonny Bairstow at the crease. It seemed to be Stokes` lucky day as Cummins dropped the all-rounder on nine and he was fortunate not to walk three overs later. Green steamed in to Stokes, clipping his off stump but only for the bails to remain intact.

Read Also | 'If I want to be harsh....' - KL Rahul points out where India lost the plot after J'burg Test defeat vs SA

Australia`s misfortune proved costly as the England duo brought up a 50-run partnership before Stokes notched up his 25th Test half-century off 70 balls.

Stokes fell to Nathan Lyon lbw on 66 with the off-spinner firing into the stumps from around the wicket. New batter Jos Buttler suffered a nasty blow to his thumb from Cummins and fell two overs later to the Australian captain for a duck.

Bairstow found a valuable partner in Mark Wood, who hit three sixes and two fours in an entertaining evening knock. Those three sixes were hit off the bowling of Cummins, though it was the home captain who had the last laugh, with Wood edging onto his helmet and into the hands of Nathan Lyon.

Bairstow moved into the nineties, and was accompanied by the resolute Jack Leach (4 not out). He became the first English player to reach triple figures in the series, slashing over the top of the slip cordon for a boundary.