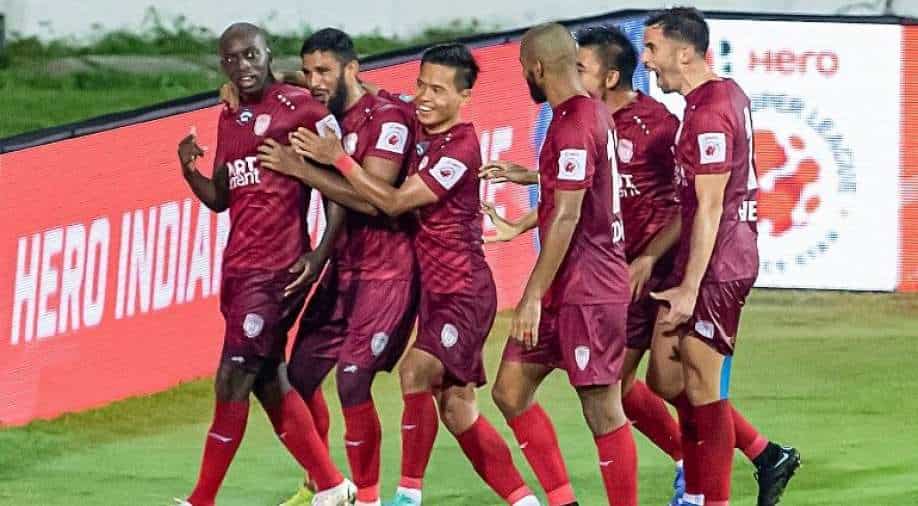 FC Goa is at the bottom of the table, still searching for their first point.

Coach Khalid Jamil breathed a sigh of relief in the end as the Highlanders closed a rather inconsistent evening leaving the Gaurs languishing at the bottom of the table, still searching for their first point.

Captain Edu Bedia was left out to accommodate former Highlander Dylan Fox. Airam Cabrera did not feature in the matchday squad as he was nursing a small niggle.

Rochharzela, making his first start of the season, paid dividends at the very outset. The Mizoram-born winger capitalised on the FC Goa defence, which went missing.

Mathias Coureur won the ball from the left with Fox unable to intercept. A through ball played to Rochharzela saw him clear and he went into the box to shoot home, albeit post a deflection off the upright.

The joy was short-lived. Jorge Ortiz ran close to the byline and squared it for Jesuraj who flipped it back. The ball was played back into space from the other end by Noguera and Jesuraj made amends by slotting the ball past the goalkeeper, to equalise in a couple of minutes.

FC Goa looked like the dominant side after their goal. The Gaurs had multiple opportunities which they failed to take advantage of. Glan Martins had a couple of long-range shots that flew over the bar.

However, NorthEast could have taken the lead just before the break when a Sehnaj Singh freekick found Lalkhawpuimawia, who managed to beat Dheeraj but the striker's header failed to find the target.

Juan Ferrando brought on Devendra Murgaonkar to spice up the attack but it was Coureur at the other end that threatened to disturb the scorers. The Martinican took a half volley from outside the box but he was denied by the post at the hour mark.

Ten minutes later, Coureur hit iron again. A long punt from the centre circle had Dheeraj's heart in his mouth but the ball ricocheted off the bar.

Despite the introduction of Deshorn Brown, the Guwahati-based side seemed to have been heading towards sharing points with the Gaurs.

But, it was the late heroic by Khassa Camara (90+4') that sealed the match for the Highlanders. A brilliant long range strike by Camara found the left corner of the target giving NorthEast the all important lead.