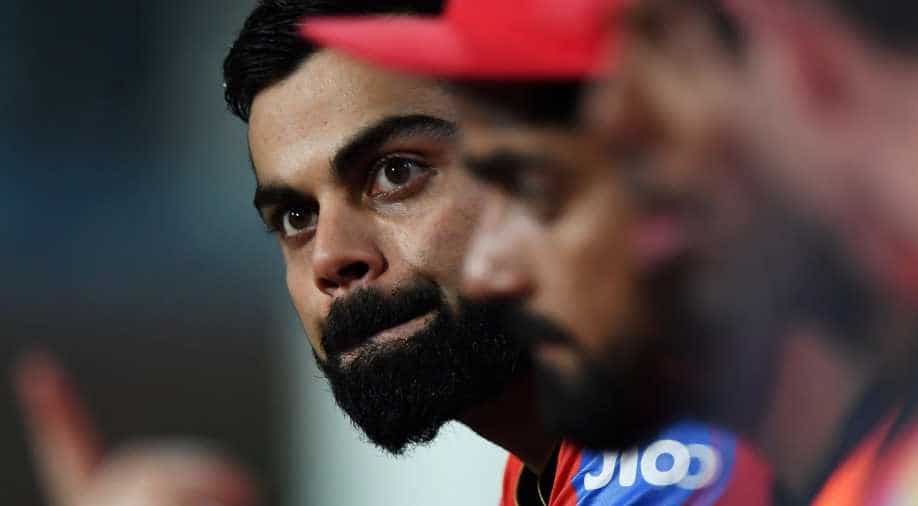 RCB captain Virat Kohli, who was out for a golden duck, looks on from the dugout as his team capitulates like nine pins during their match against Kolkata. Photograph:( AFP )

Royal Challengers Bangalore (RCB) on Friday released their official anthem for the Indian Premier League (IPL) 2020. While there was massive hype ahead of RCB anthem release, outrage was sparked on social media platform Twitter after RCB’s official handle posted the video song featuring the likes of Virat Kohli, AB de Villiers, Yuzvendra Chahal among many others.

Royal Challengers Bangalore (RCB) on Friday released their official anthem for the Indian Premier League (IPL) 2020. While there was massive hype ahead of RCB anthem release, outrage was sparked on social media platform Twitter after RCB’s official handle posted the video song featuring the likes of Virat Kohli, AB de Villiers, Yuzvendra Chahal among many others.

Fans were left upset over the use of Hindi language in RCB’s anthem as they questioned the franchise over the less usage of Kannada language in the anthem. Even former India cricketer and one of the stalwarts of Karnataka, Dodda Ganesh was left unimpressed with the new RCB anthem.

"The Official RCB Anthem is here! And it's dedicated to the best fans in the world. Time to crank up the volume to the maximum, 12th Man Army," RCB tweeted.

The Official RCB Anthem is here! And it’s dedicated to the best fans in the world. Time to crank up the volume to the maximum, 12th Man Army. 🗣🔊#PlayBold #IPL2020 #WeAreChallengers #Dream11IPL #RCBAnthem pic.twitter.com/zUBMfSM4U5

Here's how the fans reacted on RCB's new anthem:

No, Shashank. The outrage is a genuine one. Just like how the @ChennaiIPL adds local flavour with Tamil, @RCBTweets’ fans asking for a Kannada song, is justified. After all, it is Royal Challengers Bengaluru and Bengaluru’s official language is Kannada. https://t.co/sF4bVC42Ad

The entire state is fighting a battle today to avoid Hindi imposition in the state of Karnataka.

Comes RCB - Which represents the state of Kannada Nadu having a rich cricketing history releasing it's anthem which involves unnecessary use of Hindi.

With so much of Hindi lyrics in it... I don't feel like supporting it. RCB has fans from all over the country/ world, not Hindi regions only. And majorly from Karnataka, so Kannada would have been used more.

This is thousand time better than ur useless anthem... pic.twitter.com/ePSI1j70x3

Disappointed! Where's the local language?? Should have been in English and Kannada... Not Hindi...

Don't come up with a Kannada song later on to mend our wounds.. These wounds are more than a decade old and we are fed up of your callous attitude year after year.. 2/2

1. They don't promote much of local Karnataka talent in their team.

2. They hardly use Kannada. Take the new anthem for example, they have included few Kannada words so that there won't be any outrage from fans.

Suggestion: Drop Bengaluru from your banner.

Please remove Hindi or remove Bangalore(bengaluru) from your team's name ,this is hijacking some ones identity #StopHindiImposition

hey - is it royal challengers bengaluru or bareily ?
let the anthem be in kannada and a bit of english

just because we have lost all tournaments does not mean you can add hindi , dont think we are govt of karnataka to take hindi imposition !!!😡😡😡😡😡

@RCBTweets All good now, happy with this Anthem. Now Create another song/anthem that connects with the Bengaluru in its language: Kannada. It’s not a request, its a demand from #RCBians #rcb

Hope you will hear to it.

However, a couple of hours later RCB released another anthem in Kannada language which calmed the social media outrage a bit. Local fans were of the view that theme song should have feature more of Kannada language since Royal Challengers Bangalore represent Karnataka.

Apparently, the song featured only four Kannada words which has been looped thrice while the Hindi words dominate the 106-second long video.

Meanwhile, RCB would be gunning to break their IPL title drought when they take to the field in the 13th edition of the lucrative T20 tournament, which is set to be held behind closed doors in the United Arab Emirates (UAE) from September 19.

RCB are among the three teams who are yet to lift the IPL trophy with the others being Delhi Capitals and Kings XI Punjab.