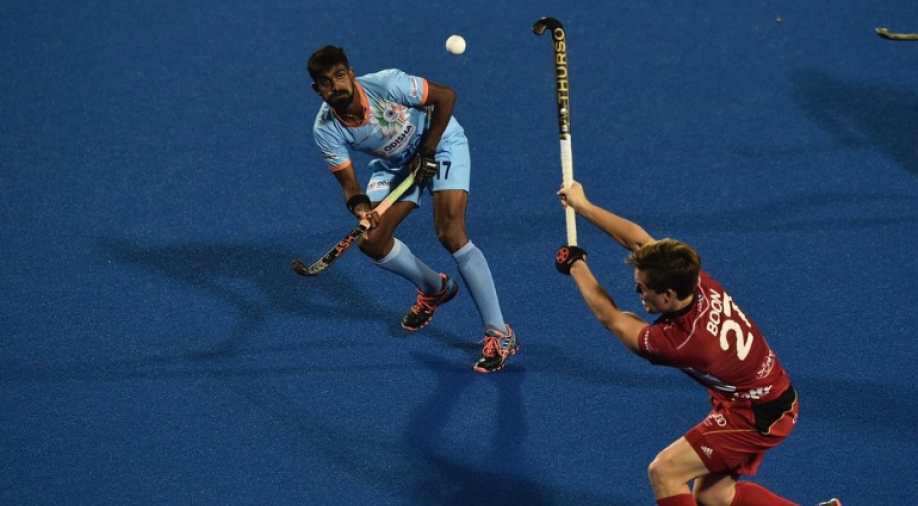 Indian and Belgium hockey team players try to control the ball during a game. Photograph:(Twitter)
Follow Us

The Men in Blue were leading when only seven minutes were remaining for the game to end.

The nail-biting clash between India and Belgium ended in a 2-2 draw after the Red Lions equalised in the last minutes of the game, following a poor defensive performance by the Indian backline on Sunday.

India, who mounted a comeback of sorts against Belgium after trailing early on against the visitors, were leading when only seven minutes were remaining for the game to end.

The 'Men in Blue' got the upper hand following a brilliant goal by Simranjeet Singh, who has been sensational in the tournament so far.

Earlier, the team which went goalless in the first two quarters scored the equaliser, thanks to a deft goal by Harmanpreet Singh.

Belgium, which had the maximum possession in the game, were on attacking mode since the first pass and that was the reason they managed to register an early goal. The team scored in the first quarter following a slick finish by the attackers who have dominated the entire game.

At a point, India had the chances of defeating Belgium, but the attackers struggled to make their presence felt in a vital clash like today.

The team will next face Canada in their final Pool C match on December 8, while Belgium will play South Africa on the same day.