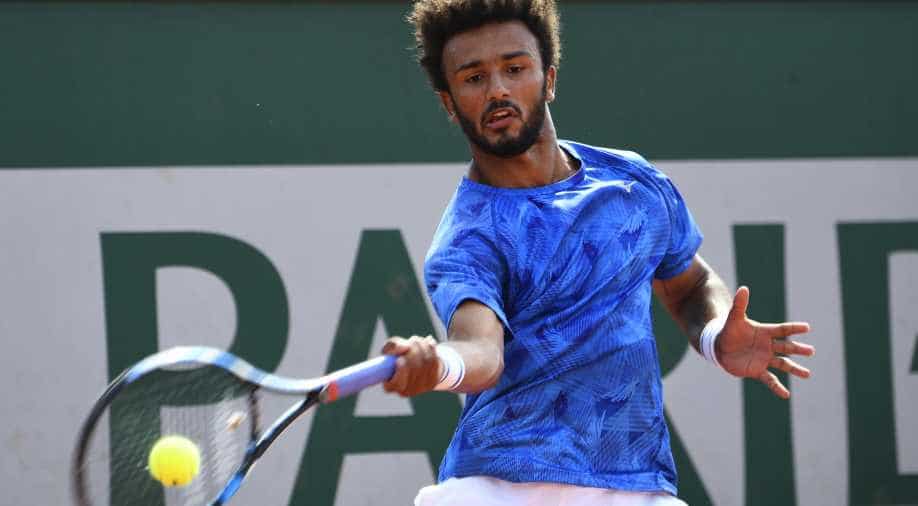 Maxine Hamou, seen here in action during his first round loss at the French Open, has been banned by the tournament organizers. Photograph:( AFP )

A French tennis player who tried to kiss a television reporter against her will during a live broadcast at Roland Garros was banished from the tournament on Tuesday for his "reprehensible behaviour".

Maxime Hamou, 21, grabbed Eurosport journalist Maly Thomas around the neck and shoulders while she interviewed him following his first round defeat on Monday.

"It was frankly unpleasant. If it hadn't been live on air, I would have punched him," Thomas told the French edition of the Huffington Post.

Hamou, the world number 287, was subsequently banned from the Roland Garros site by organisers.

"The tournament directors have decided to cancel the accreditation of Maxime Hamou following his reprehensible behaviour with a journalist on Monday," said a Roland Garros statement.

"We sincerely regret the incident that occurred during yesterday evening's interview between Maly Thomas and Maxime Hamou. The behaviour of the interviewee was highly inappropriate and we do not condone such conduct in any way," the spokesman said.

"Maly is a highly respected journalist and we are pleased that a full apology is being offered. We apologise to any viewers who may have been affected."

Hamou had already come under fire for his behaviour during a qualifying match last week when he screamed at an umpire: "Why are you here?"

But it was the incident with Thomas which was causing outrage and on Twitter especially as it prompted laughs and applause from studio guests on the Eurosport programme, "Avantage Leconte".

"He kisses her by force, she tries to get away, he holds her by the neck and everyone... laughs ...#tired," tweeted French politician Cecile Duflot.

French journalist Claude Askolovitch tweeted in French: "In a normal world, Maxime Hamou would be in court for sexual assault".

Hamou later Tuesday made a public apology to Thomas.

"I want to offer my deepest apologies to Maly Thomas if she felt hurt or shocked by my attitude during her interview," he was quoted a saying by L`Equipe daily.

"I just had a wonderful week at Roland Garros, living my most beautiful emotions as a tennis player, and I let my enthusiasm be expressed awkwardly towards Maly who I know and respect. I am at her disposal to apologise to her in person if she so desires."

The incident echoed West Indies cricket legend Chris Gayle's behaviour with a female reporter after a match in Australia in January, 2016.
Gayle opted to ignore questions on the game from Network Ten journalist Mel McLaughlin and instead told her: "Your eyes are beautiful, hopefully we can win this game and then we can have a drink after as well. Don`t blush, baby."