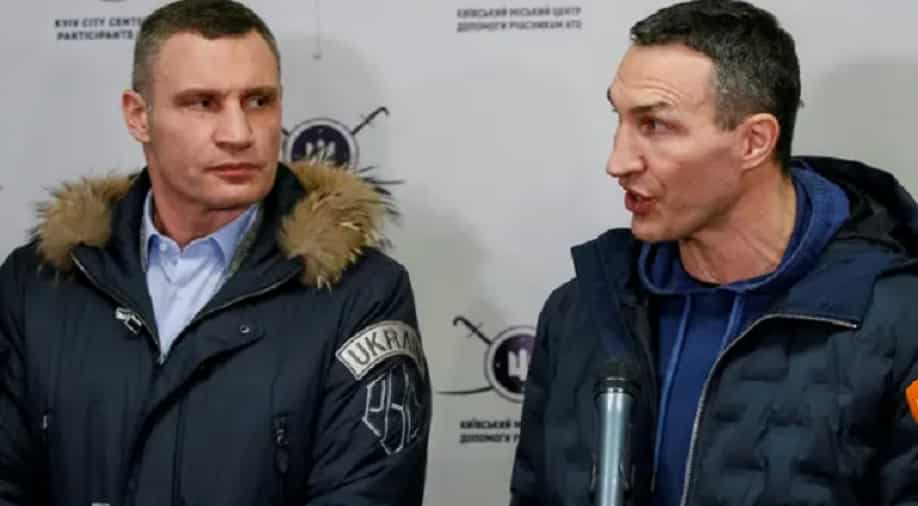 Klitschko brothers are ready to take up arms and fight against Russia for Ukraine. Photograph:( Reuters )

Former heavyweight boxing champion Vitali Klitschko and his brother Wladimir Klitschko have said they are ready to take up arms and fight against Russia for their country Ukraine.

Former heavyweight boxing champion Vitali Klitschko said he would take up arms alongside his brother and fellow Hall of Famer Wladimir Klitschko to fight in what is a "bloody war" following Russia`s invasion of their country Ukraine.

Russia launched its invasion by land, air and sea on Thursday following a declaration of war by President Vladimir Putin. An estimated 100,000 people have fled as explosions and gunfire rocked major cities. Dozens have been reported killed.

Vitali Klitschko, who has been the mayor of Ukraine`s capital Kyiv since 2014, said he was ready to fight.

"I don`t have another choice, I have to do that. I`ll be fighting," the 50-year-old, known as "Dr Ironfist" during his fighting days, told broadcaster ITV`s Good Morning Britain.

Vitali Klitschko said Kyiv was under threat and the main priority was to work with police and military forces to support critical infrastructure including the delivery of electricity, gas and water for its citizens.

He added civilians were ready to defend Kyiv as soldiers.

Former heavyweight champion Wladimir Klitschko enlisted in Ukraine`s reserve army earlier this month, saying that the love for his country compelled him to defend it.

"The Ukrainian people are strong. And it will remain true to itself in this terrible ordeal. A people longing for sovereignty and peace. A people who consider the Russian people their brothers," he wrote in a post on LinkedIn on Thursday.
"It knows that they basically do not want this war. The Ukrainian people have chosen democracy.
"But: Democracy is a fragile regime. Democracy cannot defend itself; it needs the will of the citizens, the commitment of everyone. Basically, there is no democracy without democrats."