'Fight for your dreams:' Bianca Andreescu embraces path to US Open joy 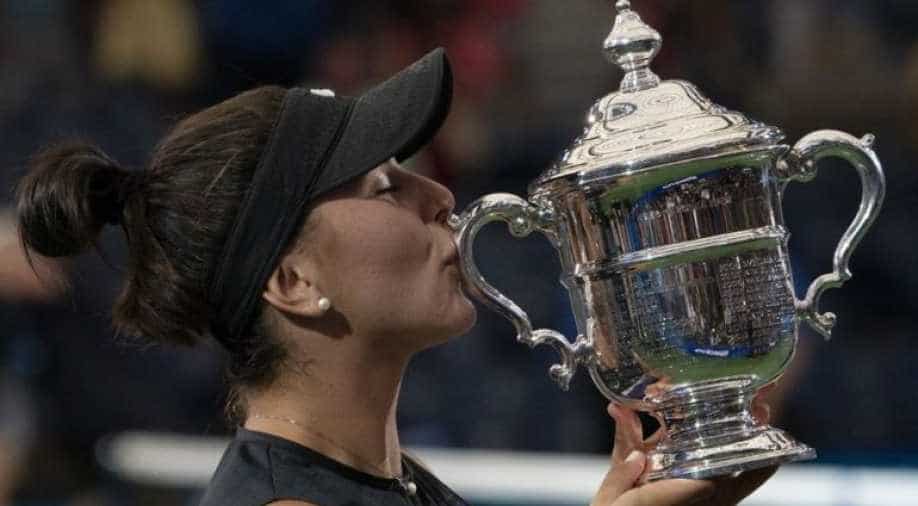 Bianca Andreescu of Canada poses with her trophy. Photograph:( AFP )

Teenager Bianca Andreescu said Saturday's US Open final triumph felt all the more rewarding after a 2018 qualifying defeat left her feeling particularly low and languishing outside the world's top 200.

This time last year a despondent Andreescu was sat at home nursing an injury and coming to terms with a second successive failed attempt at making the main draw in New York.

"It's definitely a process of life. You're never going to have ups all the time. So I think in those moments, you just have to deal with it the best that you can, which is to just keep fighting for your dreams and just stay as persistent and persevere as much as you can," Andreescu said.

"I know in those moments you feel like you can't. But if you believe that there are good times ahead, then those tough moments are definitely worth it. I think it builds you as a character. I think everyone should go through it because it just makes you stronger."

Twelve months on and the 19-year-old was hoisting aloft the US Open trophy as Canada's first Grand Slam singles champion, and the youngest major winner since Svetlana Kuznetsova here in 2004.

She stalled Serena Williams's bid for a record-tying 24th Grand Slam title with a 6-3, 7-5 win, withstanding a rousing second-set recovery from the American to become the seventh first-time major champion in the past 11 events.

"This wasn't the only time I visualised playing in the finals actually against Serena Williams. It's so crazy, man," said an emotional Andreescu, briefly pausing to collect her thoughts.

"I've been dreaming of this moment for the longest time. Like I said after I won the Orange Bowl (in 2015), a couple months after, I really believed that I could be at this stage.

"Since then, honestly I've been visualising it almost every single day. For it to become a reality is just so crazy. I guess these visualizations really, really work."

Andreescu will break into the top five Monday after her remarkable breakthrough run at Flushing Meadows, where she scooped a winner's check for an eye-watering $3.85 million, taking her 2019 earnings to over $6 million. She started the year with career winnings of just $215,888.

Andreescu, just the second Canadian woman to play in a Grand Slam final after 2014 Wimbledon runner-up Eugenie Bouchard, reiterated her commitment to serving as an inspiration for aspiring athletes back home.

"I've said this many, many times before. I'm going to say it again. It's been a goal of mine to inspire many people, especially Canadian athletes," Andreescu said, born in the Toronto suburbs to Romanian parents.

"I think that this win will hopefully do that, not only this win but just what I've accomplished this past year because so many Canadian athletes have paved the way for me when I was young. Hopefully I can be that person to them."

Andreescu credited Carling Bassett, who had been the last Canadian woman to reach the US Open semi-finals in 1984, and basketball great Steve Nash, a two-time NBA Most Valuable Player, as motivating her as a young athlete.

"Bassett, for sure, was very inspirational. Steve Nash. I can name so many. But it's really nice for people to have that inspiration at a really young age," said Andreescu.

"So when I step on the court, I just really try to show my best character, just to have that good example for other players. Like I said many times, if I can do it, if Serena can do it, if Roger (Federer) can do it, if Steve Nash can do it, then anyone can do it."