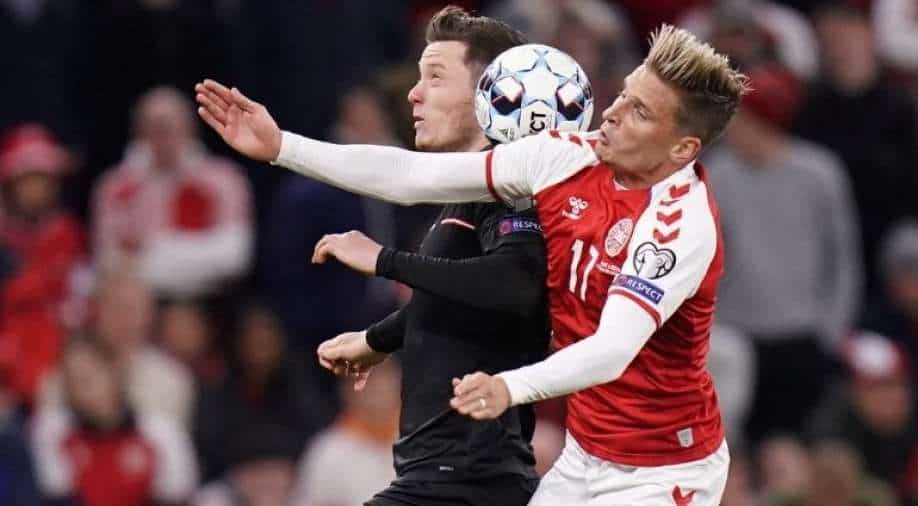 Denmark booked their spot in next year's FIFA World Cup in Qatar as they maintained their perfect record in Group F on Tuesday.

Denmark became the second European nation to reach the 2022 World Cup after a 1-0 home win over Austria on Tuesday left them top of qualifying Group F with an unassailable seven-point lead over second-placed Scotland.

After Germany advanced to the 32-nation tournament in Qatar on Monday, the Danes secured their own berth with two games to spare as a 53rd-minute goal from Joakim Maehle helped them to an eighth successive qualifying victory.

Denmark and Germany joined Qatar, who gained an automatic spot in the finals as the host nation. Only the group winners from European qualifying advance directly while the runners-up enter the playoffs.

Denmark have scored 27 goals and conceded none so far in World Cup qualifying, with their run to the finals underpinned by some impressive free-flowing football.

Following joyous scenes as the Danes mobbed each other after the final whistle, captain Simon Kjaer stressed they now wanted to make an impact in Qatar after romping through qualifying.

"We built up a crew and a mentality that is incredibly healthy and we have been eager to improve all the time," the 32-year old centre back told the country`s Kanal 5 television.

"We share the best with each other and adding that to the quality we have, we can go a long way. We have come a long way already but we have only become hungrier."

For all their flair and attacking potential, the Danes did look jittery for long spells against a well-organised Austria side who packed their midfield to cut off the supply routes.

Visiting goalkeeper Daniel Bachmann denied Andreas Skov Olsen and Mikkel Damsgaard in the first half and then kept out a Thomas Delaney effort in the 48th minute as the home side struggled to create clear-cut chances.

But Bachmann was powerless five minutes later as Denmark's best moment of the match produced a brilliant goal with Delaney at the heart of a breathtaking move.

The central midfielder weaved his way past four markers through the middle and then teed up Maehle to plant his shot from eight metres inside the near post and delight the home fans in a packed Parken stadium.

Delaney was elated after the match as Denmark made it to their second successive World Cup, having reached the round of 16 in the 2018 tournament before advancing to the Euro 2020 semi-finals this year.

"It's a pleasure throughout, in every match," he said.

"The support we've had. It is unique, what we have created, we can be proud of."

Maehle added: "It means a lot, it's one of the coolest nights in the Park in a long time. It is fantastic. It's strong for us to win here, and we got this ticket to the World Cup."