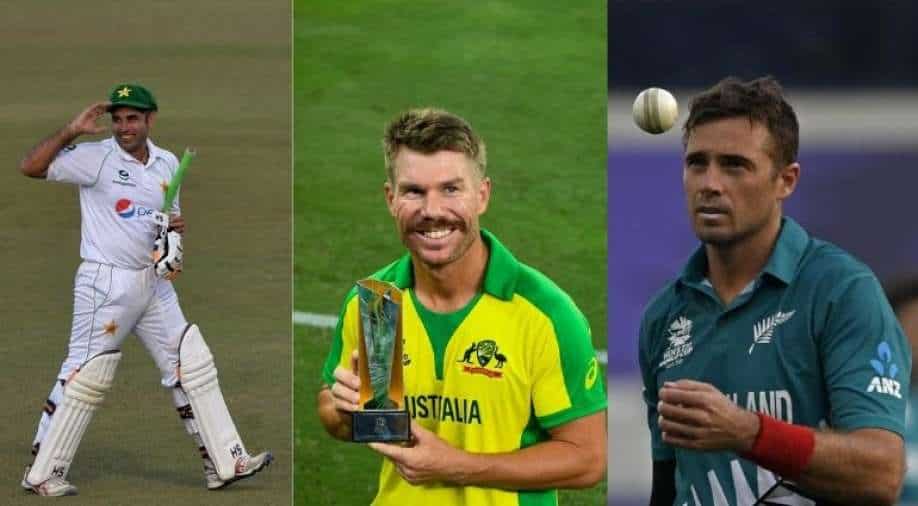 On Tuesday, the nominees for the month of November were released, based on performances across formats and included matches from the ICC Men's T20 World Cup 2021, which was hosted in the United Arab Emirates and Oman.

Australia's David Warner and Pakistan's Abid Ali have been nominated for the ICC Player of the Month honours in the men's category, along with New Zealand fast bowler Tim Southee. Anam Amin of Pakistan and Nahida Akter of Bangladesh are up for the women's award, as is West Indies all-rounder Haley Matthews, who is nominated for the second time.

On Tuesday, the nominees for the month of November were released, based on performances across formats and included matches from the ICC Men's T20 World Cup 2021, which was hosted in the United Arab Emirates and Oman.

Fans who have registered at icc-cricket.com/awards can vote till Sunday (December 12).

ICYMI: Nominees for the ICC #POTM for November 2021 have been announced 📢

ICC Men's Player of the Month Nominees for November:

Pakistan opener Abid Ali was named Player of the Match in the opening match of their ICC World Test Championship (WTC) series against Bangladesh in Chittagong, with runs of 133 and 91. He was instrumental in establishing the groundwork for an eight-wicket victory, courtesy successive-century opening partnerships with partner Abdullah Shafique.

Tim Southee got eight wickets in the first Test against India in Kanpur, shortly after succeeding in the shortest format. In November, he took seven wickets in the ICC Men's T20 World Cup and assisted his team to the final in Dubai. He grabbed three additional T20I wickets against India at Ranchi between these two landmarks.

Warner, the T20 World Cup's Player of the Tournament, also made heads turn with notable performances of 49 in the semifinal against Pakistan and 53 in the final against New Zealand. He scored 209 runs at an average of 69.66 and a strike rate of 151.44, helping his country win their first ICC Men's T20 World Cup trophy.

ALSO READ: David Warner's redemption tale is one for the ages

ICC Women's Player of the Month Nominees for November:

Nahida took 13 wickets at an economy rate of 2.22 in four ODIs. 11 of those wickets came when Bangladesh won the series 3-0 in Zimbabwe, with figures of 5 for 21 in the third match at Bulawayo. The last two wickets were taken by the spinner in a thrilling victory over Pakistan in the ICC Women's Cricket World Cup Qualifier 2021 in Harare.

Anam took 13 ODI wickets in November at a 3.00 economy rate. She took nine wickets in the ODI series against the West Indies and followed it up with four wickets in two matches during the ICC Women's Cricket World Cup Qualifier 2021, including 3 for 9 against Zimbabwe.

Hayley Matthews, who was nominated with her skipper Stafanie Taylor in July, receives her second nomination following a string of steady performances in four One-Day Internationals in which she scored 141 runs and took nine wickets at an average of 13.11. She was a standout in the series victory against Pakistan, batting 57 and capturing three wickets for 31 runs in the first game before grabbing four wickets for 26 runs in the second.

Process of voting for the Player of the month:

The three candidates for each category are chosen based on their performances from the first to the last day of each calendar month. The impartial ICC Voting Academy* and fans from across the world then vote on the shortlist. The ICC Voting Academy is made up of famous cricketers, including well-known journalists, past players, broadcasters, and members of the ICC Hall of Fame. The Voting Academy submits their ballots by email and has a 90% vote share. Fans who registered with the ICC to vote on the ICC website accounted for the remaining 10%. Every second Monday of the month, winners are announced on ICC's digital platforms.