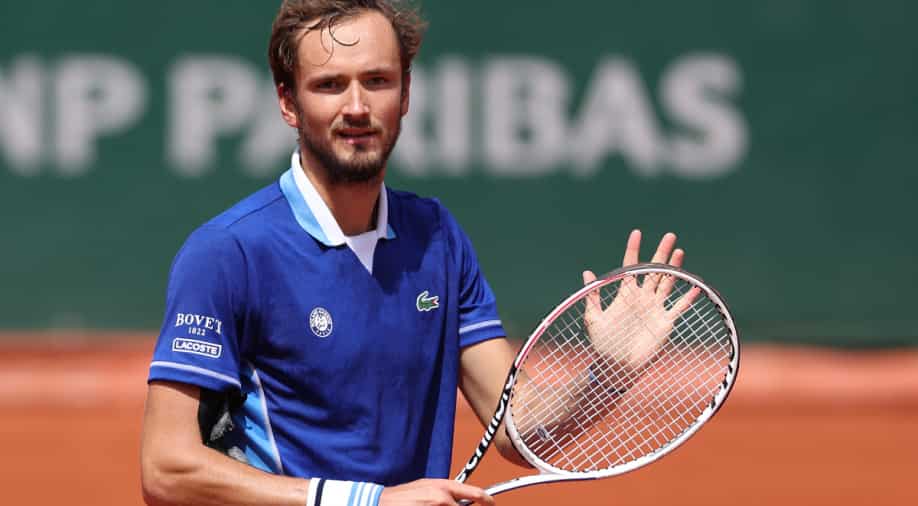 Daniil Medvedev is determined to regain world no.1 ranking with his heroics at French Open 2022. Photograph:( AFP )

World no.2 Daniil Medvedev has set his sight on regaining the world no.1 spot with a stellar show at the ongoing French Open 2022.

Daniil Medvedev, determined not to be remembered for his short-lived stay at world number one, said that he is targeting a return to the top with a stellar showing at the French Open.

Medvedev, ranked second, claimed top spot in late February but was overtaken by Novak Djokovic just two weeks later. The Russian can ascend the summit once again if he reaches the final at Roland Garros.

"I for sure want to be there more than two weeks. I want to try to do it," Medvedev said after his straight-sets win over Miomir Kecmanovic on Saturday to reach the fourth round in Paris.

"It's not something that pressures me, because I'm really happy I managed to do it. I remember Indian Wells. I lost, didn't like my match against Gael (Monfils). That's when I knew I was going to lose the No. 1 spot."

The 26-year-old joked that he looked up the players who had spent the shortest time at number one and realised he was in fine company.

"I went on Internet and looked, just like this on Google, who were the shortest like No. 1 players in the world, and the first I saw Pat Rafter being there for one week, and he's an absolute legend, and Carlos Moya was somewhere there," Medvedev said.

"It's something nobody can take away from me. Not that many players could take it while they play tennis. It's a great motivation to try to come back there."

Medvedev, who faces Marin Cilic on Monday, will miss Wimbledon after Russian and Belarusian players were banned from the grasscourt major over Moscow's invasion of Ukraine, for which Belarus has been a key staging area.