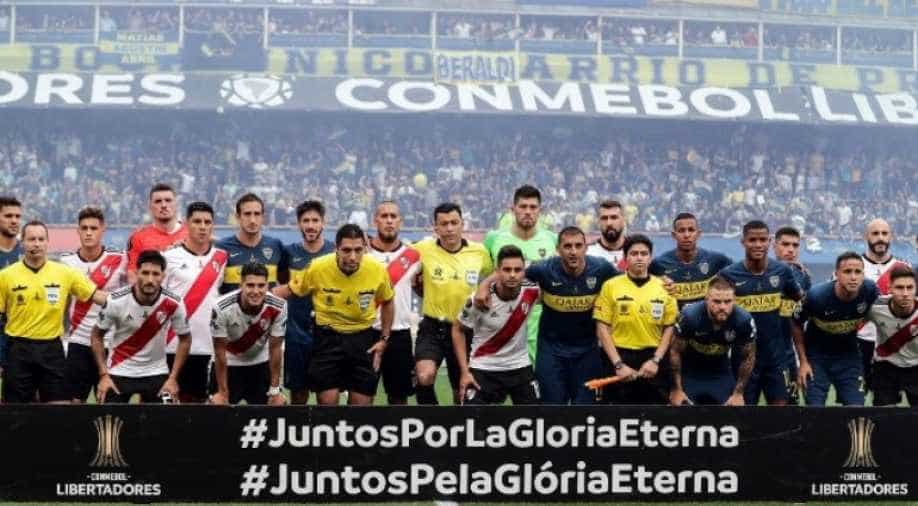 The game took place a day later than scheduled due to heavy rain in Argentina.

Boca Juniors and River Plate played out a thrilling 2-2 draw on Sunday in the first leg of their Copa Libertadores final that took place a day later than scheduled due to heavy rain in Argentina.

The first Libertadores final between Argentina's two biggest clubs was an end-to-end affair worthy of the occasion. Boca went ahead after 34 minutes when Ramon Abila followed up his own blocked drive with a ferocious shot that keeper Franco Armani got a hand to but could not stop.

Their lead lasted less than two minutes as Lucas Pratto controlled a through ball before firing in an angled drive past Agustin Rossi from 12 metres (39 feet) out.

The goals sparked the game into life and although River looked the more dangerous, it was Boca who again went ahead seconds before halftime. Dario Benedetto, who had come on to replace the injured Cristian Pavon, headed home a freekick lofted hopefully into the box.

The second half started at the same pace and River drew level in the 61st minute thanks to an own goal by Carlos Izquierdoz.

The visitors punted another long free kick into the box and Izquierdoz, under pressure from Pratto, glanced the ball past his own keeper.

Benedetto had a superb chance to win the game in the final minute but his point-blank shot was well saved by Armani.

The second leg of the final, South America's equivalent of the Champions League, will take place at River's Monumental stadium on Nov. 24.

With away fans banned from derby games in Argentina because of violence, Boca, who won the last of their six titles in 2007, played the match in front of their own fans in a sold-out Bombonera stadium.

River were also hindered by the absence of their coach Marcelo Gallardo from the stadium, who was banned for disobeying a suspension during the semi-final win over holders Gremio.

The winner will represent CONMEBOL in the Club World Cup in the United Arab Emirates next month.