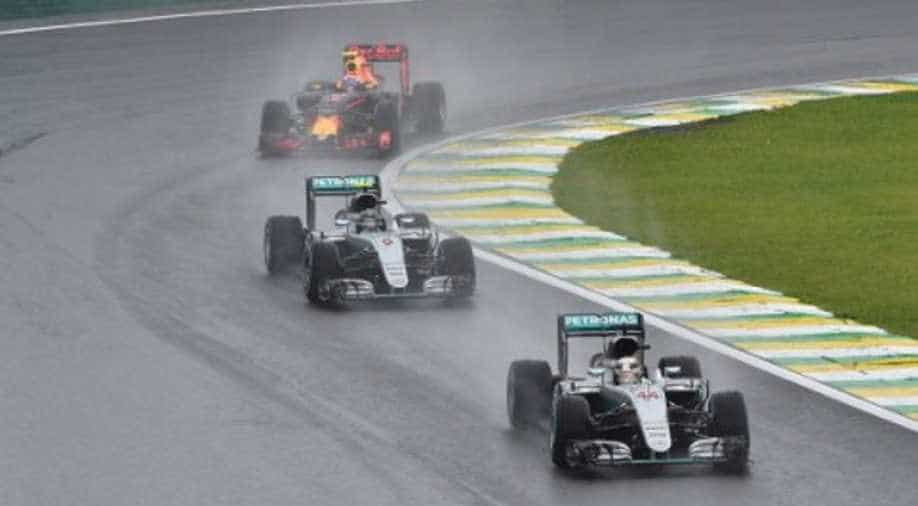 The race was twice red-flagged due to accidents and the treacherous conditions. Photograph:( AFP )

Triple world champion Lewis Hamilton won a stop-start, wet and chaotic Brazilian Grand Prix on Sunday to take the Formula One title battle with Mercedes team mate Nico Rosberg down to the wire in Abu Dhabi.

The Briton's third win in a row from pole position and first in Brazil left him 12 points behind Rosberg, who finished second, with the pair both on nine victories each for the season.

Rosberg, who would have taken his first title with a third successive victory at Interlagos, need now only finish third at Yas Marina in two weeks' time to clinch his first title, even if Hamilton wins again.

"I was generally just chilling up front," said Hamilton, whose 52nd career win put him second on the all-time list behind seven-times champion Michael Schumacher (91) but ahead of Alain Prost.

"When it rains, it's usually a good day for me ... it was a very easy race, generally. It was pretty straightforward."

He led all the way, the only minor drama occurring when water began seeping through his Ayrton Senna-themed helmet visor during the first phase of the race. He changed helmet after the first stoppage.

"No mistakes, no issues, no spins," he said.

Behind him, there was mayhem and chaos in a crash-filled thriller that was twice stopped and re-started, with five safety car periods and lengthy delays after cars aquaplaned off.

"It didn't go my way today with the win, Lewis just did a great job," said Rosberg, who survived a half-spin of his own.

"It was very difficult conditions out there. I can live with second place today, for sure."

In amongst it all, the talent of Dutch teenager Max Verstappen shone through like a beacon in the gloom.

The 19-year-old passed Kimi Raikkonen at the start and then Rosberg for second place.

He then saved a near spin, still staying ahead of Rosberg, but dropped back to 16th after his final pitstop and overtook more than half the field in the space of 17 laps to finish third.

"I think a second was definitely possible," he said.

Brazilian Felipe Nasr, whose compatriot Felipe Massa crashed his Williams in his final home race, finished ninth to hand Sauber their first points of the season and allow the Swiss team to seize 10th place from Manor.

The race started behind the safety car after a 10-minute delay, with Frenchman Romain Grosjean crashing his Haas on the way to the grid, and was twice red-flagged due to accidents and the treacherous conditions.

At one point it looked like half-points might have to be awarded, as heavier rain threatened and drivers got out of their cars and waited.

The first delay was 35 minutes, the stoppage coming after Sweden's Marcus Ericsson hit the wall, and the second for 27 minutes after Ferrari's Kimi Raikkonen crashed -- with the race taking just over three hours to complete.