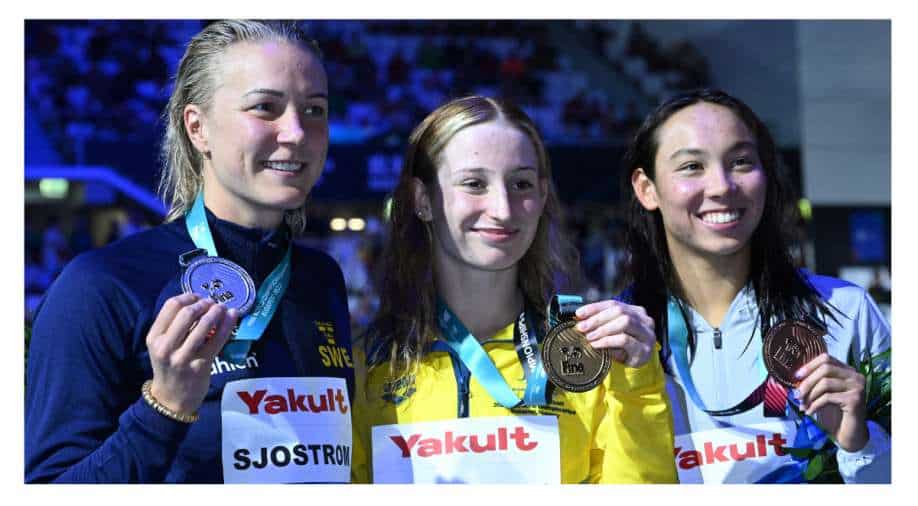 O`Callaghan was third in the final 50 but raced into the lead in the last few metres to beat favourite and world record holder Sarah Sjoestroem of Sweden, who took the silver, while American Torri Huske was third.

Australia`s Mollie O`Callaghan stormed to victory to take the women`s 100 metres freestyle gold while Americans Lilly King and Ryan Murphy took gold in the women`s 200m breaststroke and the men`s 200m backstroke at the swimming world championships on Thursday.

Zac Stubblety-Cook of Australia followed up his Olympic gold in 200m breastroke with a repeat at the Duna Arena while the United States men won the 4x200m relay. O`Callaghan was third in the final 50 but raced into the lead in the last few metres to beat favourite and world record holder Sarah Sjoestroem of Sweden, who took the silver, while American Torri Huske was third.

The Australian clocked 52.67 seconds to take gold, 0.13 seconds ahead of Sjoestroem while Huske was just a quarter of a second behind. "I`m so excited, I really don`t know what to say. I wasn`t expecting that at all. I`m racing some amazing girls here," O`Callaghan said after winning her first individual gold at the world championships.

O`Callaghan had set the fastest time in the semi-finals to earn a spot in lane four and she was unfazed in the final stretch with Sjoestroem and Huske, the 100m butterfly champion, on either side. The field was blown wide open with defending champion and twice-Olympic gold medallist Simone Manuel not competing while O`Callaghan`s compatriot Shayna Jack withdrew from the championships after breaking her hand during a training session.

After missing the podium in the 100m breaststroke, King claimed her first world title in the 200m breaststroke with a time of 2:22.41. King led at the 50m mark yet fell back to fifth by the final turn but had saved enough for a powerful final length.

Murphy had never won an individual gold at a world championships but had won in both 100m and 200m backstroke at the Rio Olympics in 2016. Stubblety-Cook was the clear favourite in the 200m breast, especially with his rival Arno Kamminga of the Netherlands pulling out in the semis.

But the 23-year-old was in the seventh spot at the 100 mark but it was soon clear that was part of his gameplan and he powered through the second half of the race to victory. The Queenslander finished in a time of 2:07.07, well short of his world record time but 1.31 ahead of Japan`s Yu Hanaguruma with Sweden`s Erik Persson taking bronze.

The American won the 4x200m freestyle relay with ease, finishing 3.26 ahead of Australia with Britain`s Tom Dean producing an impressive final leg to earn bronze.