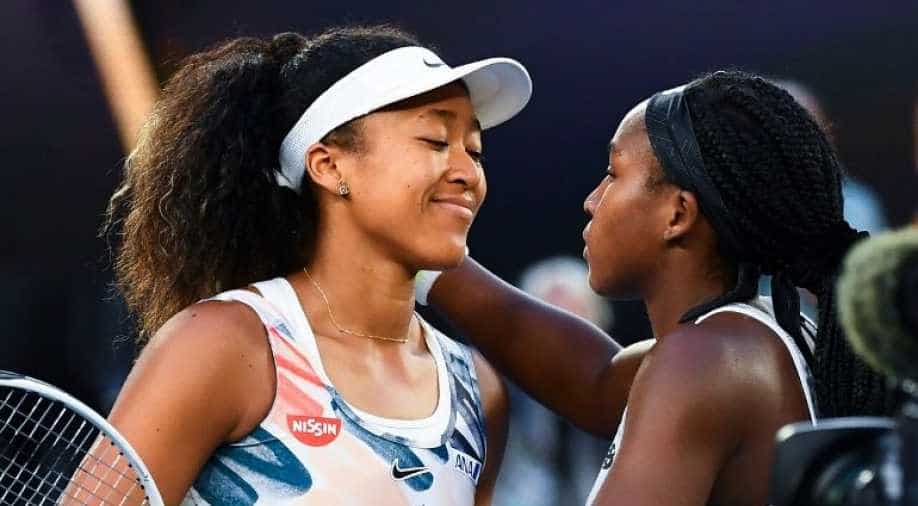 Coco Gauff of the US greets Japan's Naomi Osaka at the end of their women's singles match on day five of the Australian Open tennis tournament in Melbourne on January 24, 2020. Photograph:( AFP )

Coco in a way avenged her massive defeat she faced against Osaka last year, the Japanese tennis ace previously thrashed the American in the US Open in 2019.

Title-holder Naomi Osaka was stunned by 15-year-old Salm debutant and American Coco Gauff. Gauff is having a dream run in the tournament after beating the mighty Venus Williams in the first round, she now has beaten World No  3 Naomi Osaka in straight sets 6-3, 6-4.

Coco in a way avenged her massive defeat she faced against Osaka last year, the Japanese tennis ace previously thrashed the American in the US Open in 2019.

Gauff was in complete disbelief as she beat Naomi Osaka. "I'm on Rod Laver Arena, I can't believe this."

Gauff was shocked by her achievement, saying: "Two years ago I lost the first round in juniors, and now I'm here. This is crazy."

Gauff told the reporter in the post-match press conference about her mantra "I was just telling myself one point at a time and keep fighting because you never know what happens on this court."

📚 15 year-old @CocoGauff's teachers are giving her an extension on some assignments "considering the circumstances."

We're grateful for the flexibility too! 🙏#AO2020 | #AusOpen pic.twitter.com/tVpWCtqygA

Naomi Osaka congratulated young Gauff by hugging her. She was disappointed with her form in the match today.

"I don't really have the champion mentality yet, which is someone that can deal with not playing 100 per cent (but still win)," said Osaka.

She was disappointed in losing to a fifteen-year-old, "You don't want to lose to a 15-year-old,".